The inefficient and fragmented buying strategy brought about by the current policy will only delay the inoculation process. The Centre and states must act as one. 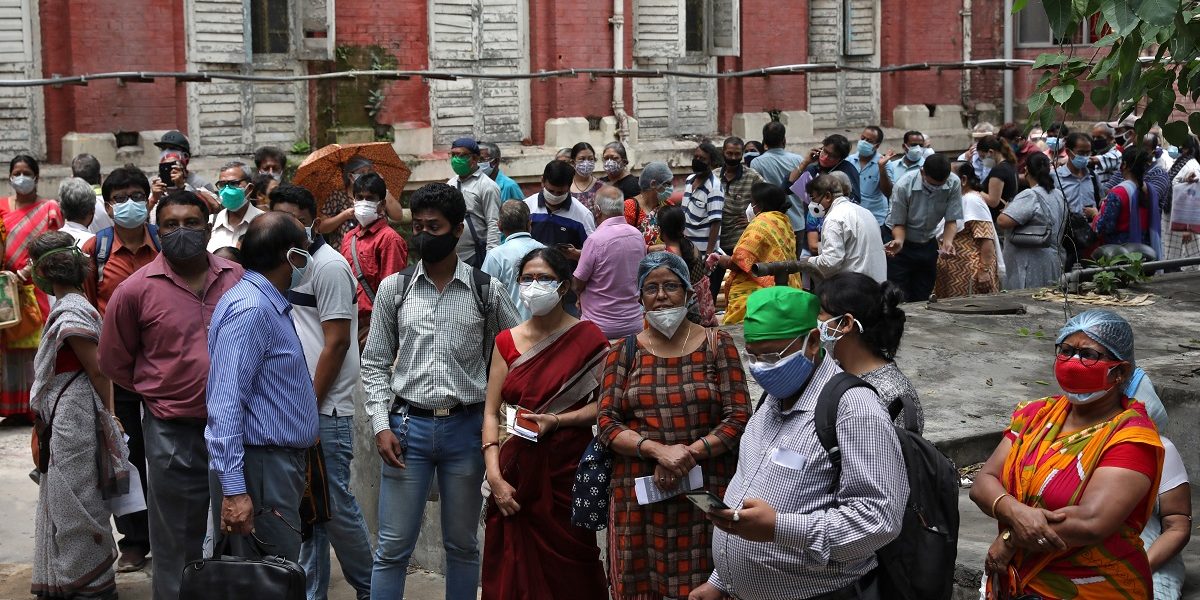 The Narendra Modi government is still behaving like a rabbit caught in the headlights on its vaccine policy. Actually it doesn’t have a clear policy yet. Merely saying 50% of the vaccines will be bought directly by states and private sector to vaccinate the 18-44 age group is abdication of responsibility by the sovereign. There are no vaccine stocks and it is clear to everyone that vaccination is a time sensitive exercise, given the real threat of a third or fourth wave of COVID-19.

Azim Premji had said at a post budget conference in early February, in the presence of the finance minister, that the Centre must have a plan to vaccinate 500 million people in two months. So a time bound target is the first element of a any good vaccine policy. The Centre hasn’t articulated a vaccination target for the next three, six and nine months.

The second element is procurement of adequate vaccines based on domestic capacity and imports. We are not clear how this is going to happen. The Centre has said states are free to import from abroad. Maharashtra is talking to Moderna to buy a few million vaccines. If half a dozen other states separately call Moderna to place their orders, it will surely be a great advantage to the seller. Such inefficient and fragmented buying strategy is highly unfair to the Indian taxpayer. So there is no clear policy here either. 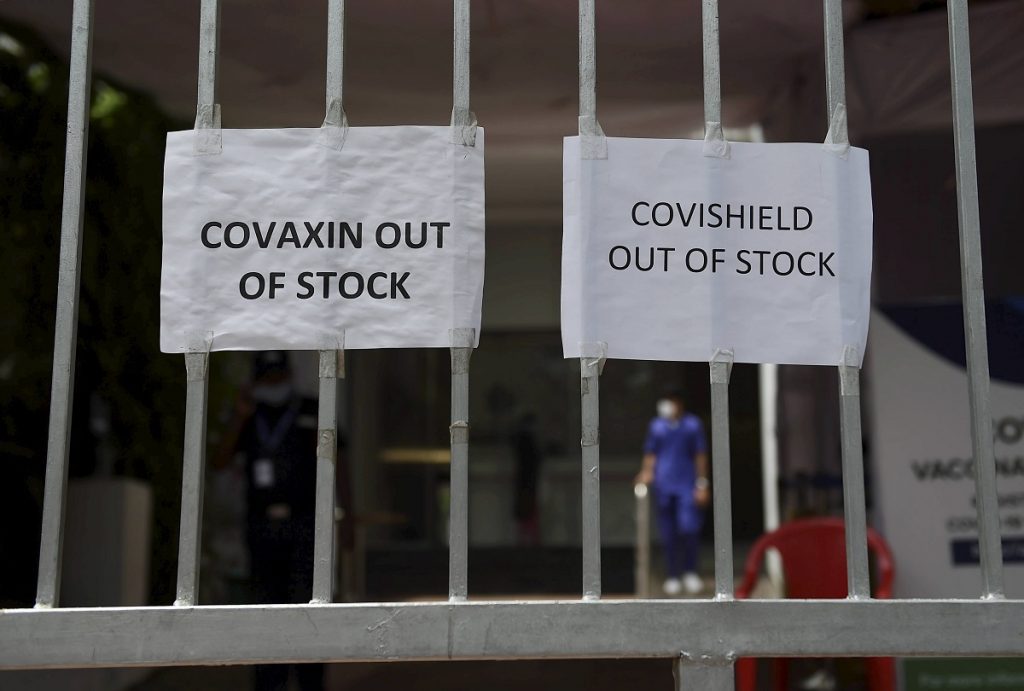 Posters at a COVID-10 vaccination centre declare it has no available stock in Mumbai, April 30, 2021. Photo: PTI/Kunal Patil

The Centre has told the Supreme Court that it should trust the wisdom of the executive in implementing the right vaccine policy. However, the fact is that there is no clearly articulated national vaccine policy.
The states have been left to negotiate prices and volumes to vaccinate the 18-44 age group and there is no clarity on the quantum of vaccines that will be made available for the next three months, after which a production expansion of Covisheld and Covaxin is expected. Until the end of July, the country will have to make do with the existing domestic capacity of 70 million doses a month. Based on domestic capacity, a little over 2 million doses can be administered per day until higher capacities kick in after July. The imported Russian vaccine Sputnik V is also expected to be administered from the third week of May, but no estimate of quantities has been provided by the company. It would probably depend on the price negotiated by the government.

Clearly, the government finds itself in a weak bargaining position since it has lost four months since January, when it could have ordered larger quantities from domestic producers at better prices. Indeed, the Centre and Serum Institute of India could negotiate a price of Rs 150 per dose for the initial lot of Covisheld partly because the pandemic didn’t seem so threatening then, and the government was sharing the risk while fast-tracking regulatory clearances. The situation has changed qualitatively and the Centre admits this in its affidavit to the Supreme Court that due to “peculiar” and “unprecedented circumstances”, it is pursuing a policy where states are being permitted to negotiate prices with various manufacturers in India and abroad. What the affidavit doesn’t state explicitly is that the vaccine makers have more power to dictate terms now, given the “unprecedented” conditions brought on by the second wave. The relative calm between two waves of the coronavirus is the period when the Centre had relative power to bargain better.

The Centre has admitted in its affidavit that it cannot invoke statutory pricing norms – by imposing a fixed price on producers – because differential pricing and competition is needed to build sustained production in the country. This is another admission that the vaccine producers now have a greater leverage to bargain, in the wake of the second wave.

Work together for bulk discount

How does the Centre deal with this predicament? One way is for the Centre and the states to work together and negotiate a bulk discount with vaccine producers for the supply of 1 billion doses over the next nine months. If every state strikes a separate deal, it brings down the collective bargaining power of government. It is a better idea for the Centre and states to buy through one window, and the states can then pick up their share.

If the second wave peaks in a few weeks, the Centre and states can wrest back some of their bargaining power, before a possible third wave hits. For this to work, the Centre has to clearly spell out its policy. At the moment, its only policy seems to be that the states are responsible for vaccinating the 18-44 age group.

Prime Minister Modi is solely responsible for India’s vaccination policy mess as it has developed from November 2020 to April 2021. There is no escaping this. He can now retrieve the situation by taking the state governments on board and formally announcing free vaccination for 800-900 million Indians via public health centres. The Centre and states cannot afford to act as multiple, fragmented entities in implementing a national immunisation programme. The government (Centre plus states) must act as one to bargain for the best price, but administering the vaccines can be a decentralised exercise. Vaccination policy per se cannot be allowed to become a political football. It is the Centre’s primary responsibility to ensure this, and it is absolutely essential if India is to save lives and livelihood in the medium term. Ramp up production of Covaxin

Now, the prime minister needs to prioritise things urgently. His spin doctors are busy projecting him as a champion of patent waiver and the mass production of vaccines in India. That would take its own time, as WTO negotiations are very complex and it is not easy to go from IP waiver to manufacturing unless the technology and manufacturing process is also shared. What is needed immediately is to make vaccines available for a critical mass of Indians over the next six months. We roughly need 8-10 million vaccinations a day to jab 800-900 million people with two doses by the end of the year. This is not impossible, provided everyone works together.

Some chief ministers have requested the prime minister to rapidly scale up Covaxin production by licensing its production to many Indian companies, including some PSUs which have idle capacity. Scaling up Covaxin is easy because the Indian Council of Medical Research (ICMR) partnered Bharat Biotech in evolving the technology, which has been endorsed as effective against the double mutant variant by the US’s Anthony Fauci. Indeed Bharat Biotech has already begun collaborating with some vaccine manufacturers in the public and private sectors to increase production. This exercise has to be scaled up manifold and on a war footing by activating a large number of vaccine manufacturers under a special technology transfer license within the next three months.

Nothing stops the Centre and states from working together to enhance Covaxin’s capacity to over 150 million a month by August or September. The Centre must start by laying down a clear vaccine policy roadmap with time bound targets. Time is of the essence because it is inextricably linked to saving lives and livelihood.