"The irony here is that service rules with a colonial spirit are invoked in a democratic India to stifle the freedom of conscience." New Delhi: The Jammu and Kashmir government has initiated a departmental inquiry against 2010-batch IAS exam topper Shah Faesal for his “sarcastic” tweet about frequent rapes after receiving a request from the Centre’s Department of Personnel and Training (DoPT)

In a notice to Faesal, the General Administration Department (GAD) said, “You have allegedly failed to maintain absolute honesty and integrity in the discharge of official duty and thus acted in a manner unbecoming of a public servant.”

Twitter user @p7eiades responded to the officer’s tweet with a link to a Wikipedia page highlighting the ‘effects of pornography’ and sexual violence, to which the IAS officer responded by sharing a news report about a “porn-addict raping his mother” with the caption “Difference between theory and practice“. Speaking to The Wire, Faesal said, “Such actions are usually taken by invoking Conduct Rules. One, behaviour unbecoming of a civil servant, and second, criticism of government policy. Now it’s a matter of interpretation. Anything and everything can be read as behaviour unbecoming of a civil servant and criticism of government policy if we are not serious enough about respecting freedom of speech and expression of people.” 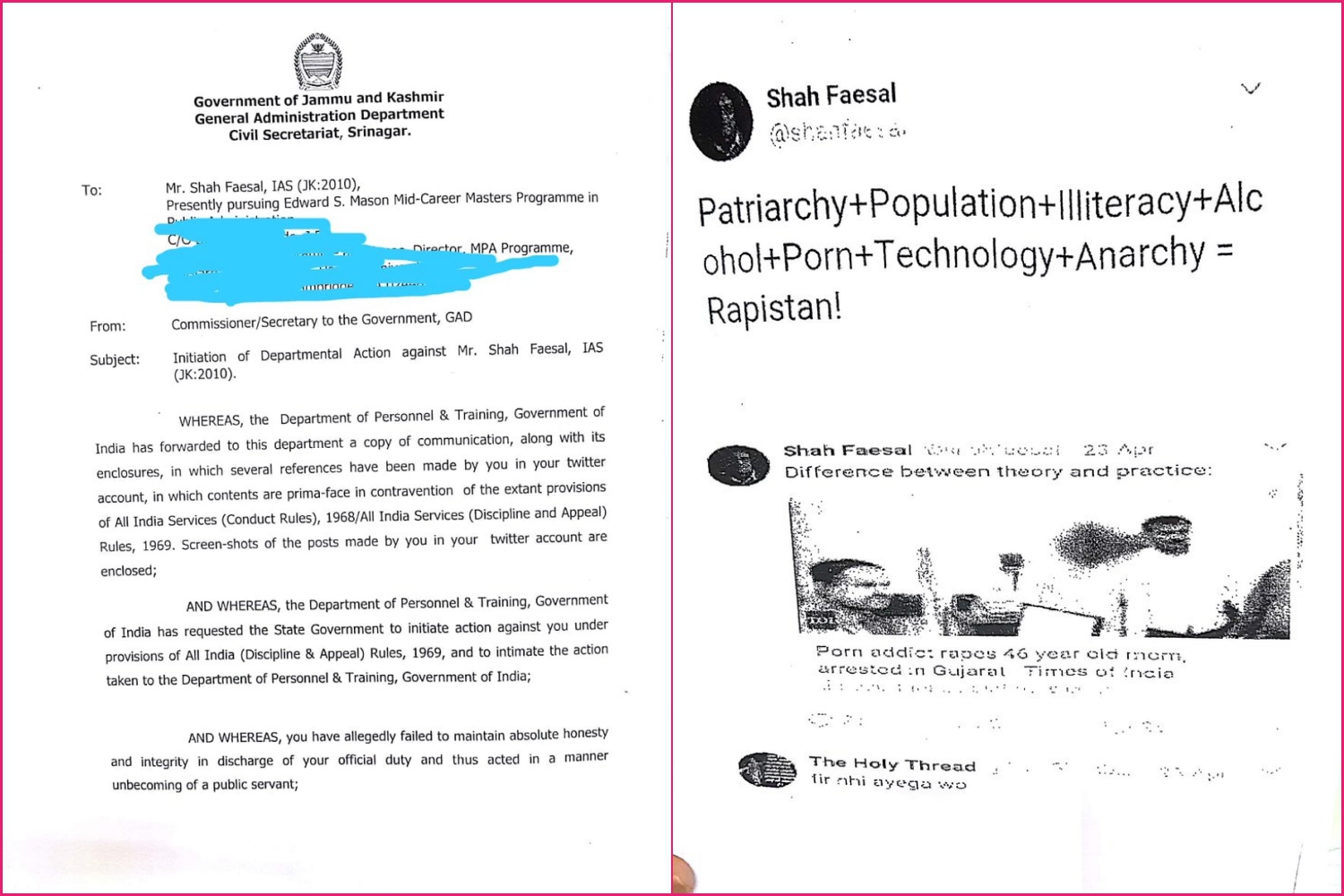 The IAS officer brushed aside the notice and tweeted, “Love letter from my boss for my sarcastic tweet against rape-culture in South Asia. The irony here is that service rules with a colonial spirit are invoked in a democratic India to stifle the freedom of conscience. I’m sharing this to underscore the need for a rule change.” | Image courtesy: Shah Faesal/Twitter

This isn’t the first time the Centre has invoked the All India Services (Discipline and Appeal) Rules, 1969, to act against a member of the Services. In February, the Home Ministry wanted IPS officer Basant Rath disciplined for writing columns “dangerously critical of government policy”.

However, the MHA service rules make it clear that as long as the official says the views are personal, there is no bar on his or her writing.

“There is a fine line between personal and professional. It is very difficult to give disclaimers every time we say something as it makes the entire argument pointless. Idea here is that an officer can’t be torn into two pieces in the middle and his thoughts can’t be divided into sarkari and non-sarkari,” said Faesal. Faesal, whose father was gunned down because he refused shelter to militants, became the first Kashmiri ever to top the civil services exam in 2010. Credit: Facebook

The IAS officer, who is currently pursuing a mid-career masters programme in the US, believes that the government should be open to criticism. “Looks like the DOPT is determined to chase @shahfaesal out of the civil services. The last line of this page is shocking & unacceptable where they question Faesal’s integrity & honesty. How is a sarcastic tweet dishonest? How does it make him corrupt?” he tweeted.