Hyderpora 'Encounter': A Month On, Families Await Justice; Probe Report Not Made Public

After the 'encounter' on November 15, the J&K lieutenant governor ordered a probe into the matter after families accused the police of killing innocent civilians. 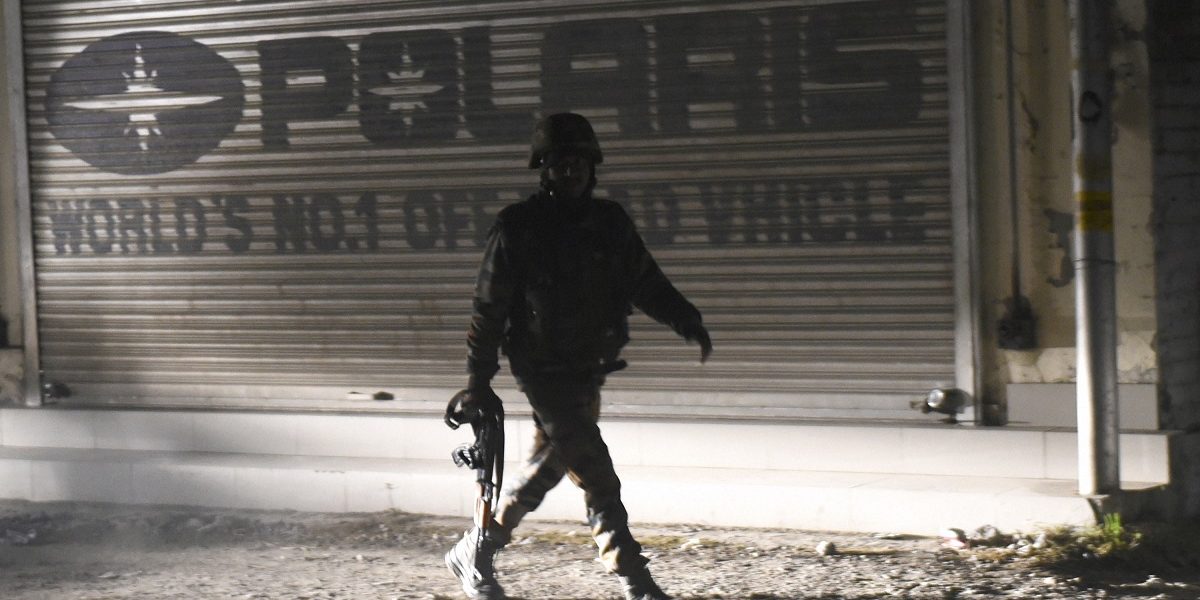 A member of the security forces during an encounter with militants at Hyderpora, in Srinagar, November 15, 2021. Photo: PTI /S. Irfan

Srinagar: More than a month since the Jammu and Kashmir administration ordered a magisterial inquiry into the controversial ‘encounter’ in a three-storey building in the Hyderpora area of Srinagar on November 15 that killed four persons, the probe findings are yet to be made public even as the families of civilians slain wait for justice.

According to Kashmir Walla, sources associated with the investigation said, “The inquiry officer has submitted the report on time, it is now up to the higher authority to take a call on it.”

The bodies of the four who were slain were buried overnight by the police about 90 kilometres away from Srinagar in a remote village in the Handwara area of north Kashmir. The bodies of two Srinagar residents – businessman Muhammad Altaf Bhat and Dr Mudasir Gul – were later exhumed and handed over to their families following widespread outrage and sit-in protest held by the grieving families in Srinagar’s press enclave.

However, the dead body of 23-year-old Amir Magray, resident of Ramban village, is yet to be returned to his family.

The lieutenant governor ordered a magisterial probe five days after the ‘encounter’ and appointed  Khurshid Ahmed, additional district magistrate (ADM) Srinagar, as the investigation officer for the probe. But even after more than a month, the probe findings are yet to be made public, raising concerns and doubts among the families of the slain regarding the probe progress.

A tweet by the Office of LG on November 18 had stated, “Govt will take suitable action as soon as a report is submitted in a time-bound manner. JK admin reiterates the commitment of protecting lives of innocent civilians & it will ensure there is no injustice.”

Lieutenant governor Manoj Sinha in an interview to a news channel on December 4 had also said that the probe report would come out in three days.

“The inquiry in the Hyderpora incident has been ordered and the report will come in the next three days. If any innocent is killed, strict action will be taken against the culprits,” Sinha said in the interview.

“Please produce the relevant documents of the owner of the land and building, along with the proper permission/license to run commercial activities in the building from the concerned authorities,” reads the letter dated December 16, signed by the deputy inspector general of police(Central Kashmir Range). The letter also seeks “details of all rented floors/rooms along with details of all renters with rent deeds of the building.” The letter further asks for providing “all the details in writing along with relevant documents within one week” from the date of receiving the letter.

Muhammad Lateef Magray, the father of Amir Magray, said that he met the lieutenant governor on December 7 in Jammu seeking justice and the return of his son’s body so he could be buried in their local graveyard.

“The governor told us that the inquiry is on. He asked us to wait for two days for the investigation to be completed, but now it’s been more than a month and we have not even been given his dead body despite our repeated pleas,” Magray told The Wire, adding that the administration has been “lying all along”.

“Nothing has happened so far and there is no justice. We again appeal to the governor to deliver justice to us as promised and return his dead body,” said Magray.

Magray had earlier told The Wire if his son’s body is returned and he is later found to be a militant, “they can take back his body from the grave here”.

“We have been demanding a judicial inquiry into his killing,” Magray reiterated. “My son was innocent and he was just doing his work in that building to earn for his family.”