With his arrest, all six accused persons in the case have been taken into custody – including one adult and five juveniles. 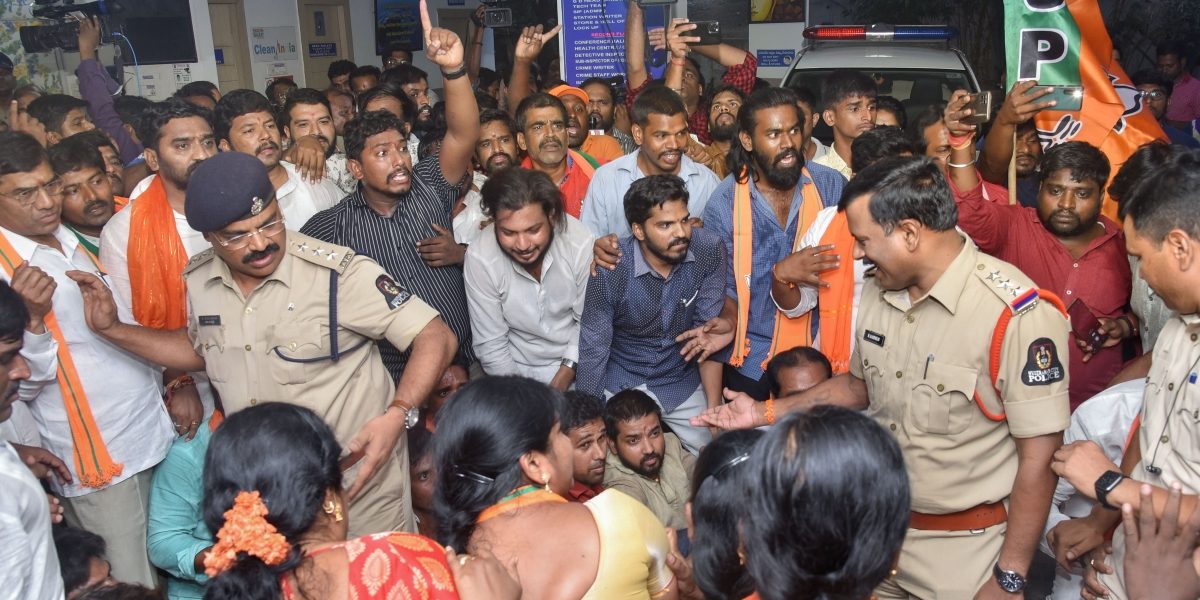 BJP workers protest inside the Jubilee Hills police station demanding justice to a minor who was allegedly gang-raped in Hyderabad, June 3, 2022. Photo: PTI

New Delhi: The minor son of an All India Majlis-e-Ittehadul Muslimeen (AIMIM) MLA was detained on Tuesday in connection with the rape of a minor girl in Hyderabad’s Jubilee Hills, days after a Bharatiya Janata Party (BJP) leader alleged that the boy was involved in the assault.

With his arrest, all six accused persons in the case have been taken into custody – including one adult and five juveniles. They have been accused under the Protection of Children Against Sexual Offences (POCSO) Act and sections of the Indian Penal Code.

The case has created shockwaves across the country, not just because the alleged gang rape occurred in a car that was parked in the plush Jubilee Hills area but also because the involvement of persons from “influential families” was alleged.

While the police had initially denied that an MLA’s son was involved, they have now backtracked. According to reports, among the other accused are the sons of two politicians – including one whose father is a local leader of the Telangana Rashtra Samithi (TRS), the ruling party.

#Hyderabad gang-rape: #AIMIM MLA’s son named as accused no 6. He is being produced in juvenile court. Police commissioner Anand confirms that the vehicle in which gang-rape took place was an official car.

The car in which the girl was assaulted was a government vehicle that was recently assigned to a politician, according to reports.

Opposition parties have slammed the Hyderabad police for alleged delays in filing the case and arresting the accused and have demanded that the Central Bureau of Investigation (CBI) take over the investigation.

BJP MLA Raghunandan Rao caused ripples on Saturday when he showed photos and videos – purportedly of the AIMIM leader’s son and the survivor – to “prove” that the minor was involved in the crime. While his allegations were concerning, his actions – potentially uncovering the girl’s identity – also raised ethical questions. Rao said he had taken care to ensure that the girl’s face is not visible in either the photos or video he showed.

A case has been registered against the MLA for sharing the video.

According to India Today, Hyderabad police commissioner C.V. Anand told reporters that Saduddin, the 18-year-old accused, and one of the juveniles “trapped the victim” in a pub after 3:15 pm. She was assaulted in an Innova car and dropped back at the pub at around 7:32 pm, the report says.