How the Left Lost the Tribal Plot in Tripura

By moving away from the 1950s' moment when the Left built a solid tribal base by soldering ethnic identities and Left politics of redistribution, the CPI(M) created a political vacuum in which the RSS swam in with money, muscle and men.

Agaratala: People wait in a queues to cast their votes for the Tripura Assembly Election in Agartala on Sunday. PTI Photo(PTI2_18_2018_000054B) Road and rail blockade by Indigenous People Front of Tripura, an ally of the BJP,  to demand a separate state – Tipraland on the outskirts of Agartala. Credit: PTI Files

The defeat of the Communist Party of India (Marxist) in Tripura has now perhaps sunk in. The Bharatiya Janata Party’s success in Northeast in the Lok Sabha elections of 2014 had been a sign of things to come. This loss adds to the air of inevitability already hanging over anti-BJP forces across the country. The year 2019 seems very far away. The electoral evisceration of the parliamentary left in India appears here as a minor, if tragic, footnote.

Perhaps this is as good a time as any to look at what went wrong. The communist party in Tripura has had a long and fascinating history. It is one of the rare examples of how an institutional Left party can engage with the question of ethnic identities. Successfully. This is important to remember as often the figure of the universal Marxist revolutionary is imagined to be indubitably opposed to specific identities. It is to the immense credit and vision of the undivided Communist Party of India that it found a political practice that could not only accommodate but think through the problem of concrete.

In the early twentieth century, different incipient civic organisations in the princely state were used by the undivided communist party as sites where the particulars of the ethnic questions and the universal promise of the communist movement could be worked out. Jana Mangal Samity (1938), Jana Shikhaa Samity(1945) , Tripura Praja Mandal (1946), at different points in the first half of the twentieth century were products of this dynamic.  Education was a key component—Jana Shikhaa Samity foregrounded the spread of literacy among the tribal population as a sine qua non—of these experiments. One must imagine education here as a dialogic process. On the one hand, the party was educating themselves in the art of grassroot politics, negotiating ethnic identities, learning from the material experience of the movement, while on the other hand, it pushed forward in a more conventional if contentious sense: educating the ethnic population in the politics of resistance. It was both leading and following. It was a dialectic.

The organisations in different degrees criticised the Bengali domination of princely state bureaucracy.  It was working out a politics, in a limited frame, of fair distribution of access to resources (land) for the marginalised tribal populations.  From these operations emerged the Gana Mukti Parishad which led a four-year-long armed struggle against the princely court administration and the Indian state. When in 1951 the party moved away from the armed struggle abandoning the ‘(B.T) Ranadive line’, it nevertheless stood out as an exceptional moment. It had soldered ethnic identities and a Left politics of redistribution together around possible futures in independent India. This is how the Left had created its mass base among the tribal population of the state. It was long drawn, patient and meticulous. It reversed the relationship between the centre and the frontier. Here frontiers moved in and shaped the early communist party imagination. In 1953, the central committee resolutions of the communist party reiterated the importance of the Tripura experiment.

This is the version of the party that should act as the nostalgic anchor to address the 2018 electoral defeat. But the thing is that the Left that got defeated in the recent elections has moved very far away from the 1950s’ moment.

The CPI(M) came into power in 1978, was briefly defeated by a Congress and Tripura Upajati Juba Samiti Coalition but returned in 1993. 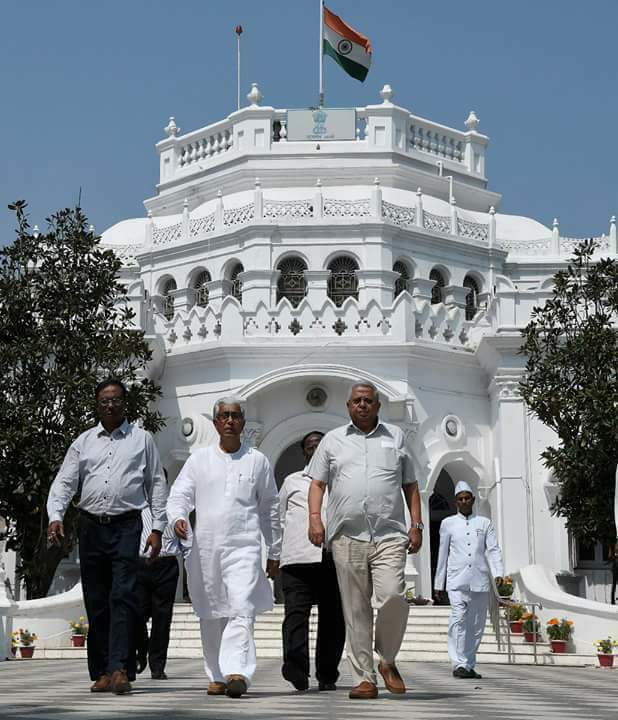 In the meantime, the model of governance of the Left, the arc of its political practice changed. From concrete experiments that bore fruit and brought a surge of tribal support, the party moved to a big development projects-centred governance model. The Gumti river hydel project commissioned in the 1970s is a classic example of this vision of the state. (This is what James Scott in a different context, has evocatively called ‘seeing like a state.’) The devastation the project caused to a large extent breached the alliance with ethnic politics that had been built in the earlier decades. The 40,000 or so tribal families affected by the river project barely received any compensation. The environmental damage was immense. By 2007, the dam hardly produced any electricity, the water levels had come down drastically, but the government was unwilling to distribute these new char lands among the tribal population. Instead, chief minister Manik Sarkar smelt a ‘conspiracy’. Considering the huge influx of Bengali settlers flooding into the state after the 1971 Bangladesh war and the apprehensions this caused within the tribal communities, one can’t help but think this to be a missed opportunity.

The question of language became another source of conflict. Kokborok, the Tripuri language was given recognition by the Left as the second official language in 1978 but the script chosen was Bengali. This would later become a point of contention for younger generations of Tripuris who were following models of Christianised communities like the Mizo and Nagas and would insist on Borok being written in the Roman script rather than Bengali. It would strengthen the perception that CPI(M) was a Bengali bhadrolok (gentleman)-dominated party with only a superficial concern for tribal welfare. The inability to envisage the problem of having a Bengali script for the Borok language showed the short-sightedness of a party now more than ever attuned acutely to electoral success and survival.

The insurgency in Tripura in the 1990s led by National Liberation Front of Tripura among others brought the arm of Armed Forces Special Powers Act, AFSPA in the state. Again, the Left followed the dogmatic Indian state consensus by taking refuge in the oppressive AFSPA and playing the All Tripura Tribal Force (ATTF) against NLFT instead of recalibrating its relationship with the tribal population at a new and fragile moment in ethnic politics. Notwithstanding the fact that NLFT articulated a chauvinist social model of making Tripura Christian, targeting the Bengali population (with its insistence on Christianity NLFT opened rifts within the tribal alliance, alienating the Reangs and Jamatiyas; the Borok language issue itself had similar effects where Reangs and Jamaityas resented the imposition of a Tripuri language on them; Interestingly the first avatar of the Indigenous Peoples Front of Tripura, IPFT, was explicitly backed by the NLFT. NLFT in 1999 had kidnapped four Sangh workers who were in all probability killed, one wonders how these moments will be managed in the BJP alliance in the future) it remains a fact that  the party in power, wittingly or not, despite its cursory commitment to tribal causes, had moved towards a system that  depended more and more on a Bengali majoritarian logic. The problem with a majoritarian logic is that, more often than not, in due course, it gravitates towards the right.

The CPI(M) closed the door on a possible alternative course of politics in the Northeast when it followed the model of development under the shadow of militarisation. This model was already under threat in the early 2000s when IPFT made significant headways in the Tripura Tribal Areas Autonomous District Council Elections.  It was mirroring what Congress governments at the Centre had been doing in the Northeast for a long time. Playing insurgent groups against each other, promising development and democracy while upholding a legal regime where the rule of law remained suspended.

The fact that the Left had been able to hold on to the electorate for this long is in fact a surprising achievement. Yes, the governance indicators were good, the numbers were excellent in terms of literacy and MNREGA but a more critical look at the numbers perhaps is in order now. How much of it reflected substantial benefits to the tribal population is open to debate. The visible loss of land, the shrinking of the tribal population to a minority over a period of time, the forced displacements and counter-insurgency measures, the implicit recourse to Bengali majoritarian logic, on the other hand, appeared to have been robust symbolic channels through which indigenous politics, even in its narrow chauvinistic form (NLFT), could articulate an anti-left position. In this election billed as the Left versus Right ,these repositories could be tapped into with an ease.

The transformation of the moment of solidarity forged in the 1950s  into a system of election-oriented administration created a political vacuum. The Rashtriya Swayamsevak Sangh has moved into that vacuum with money, muscle and men. It is setting the terms of debate for any new political agenda. It can do so because the success of Left for a while now has been based on a managerial numbers game played out in a massively militarised context. And when it comes down to pure management of numbers, men and violence, one knows how that story usually ends.