How Delayed Decisions, Poor Coordination Did Chennai In

Given just a few hours to warn residents of the impending flood, the authorities struggled to save Chennai. 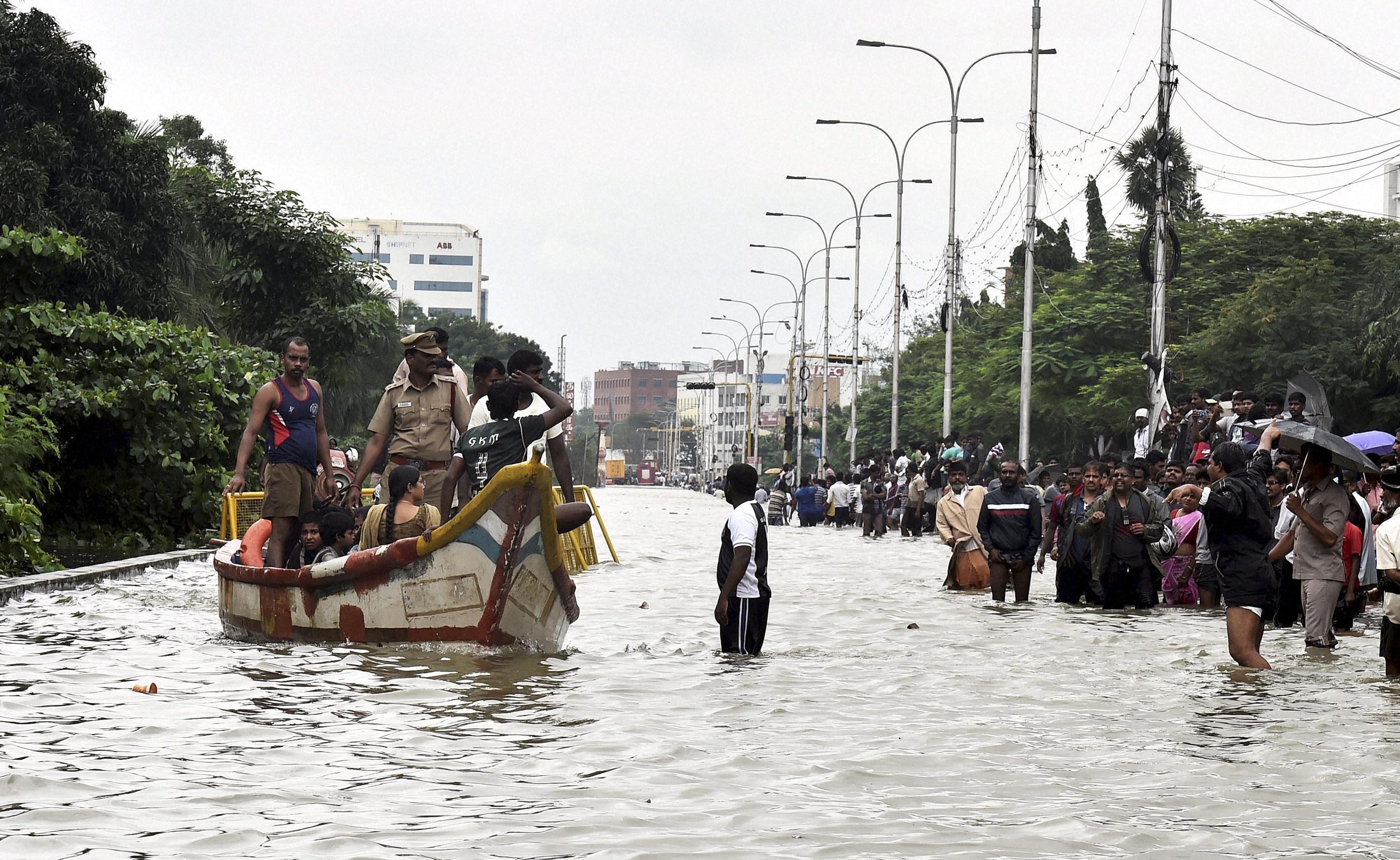 People rescue from their water-lodged houses during heavy rains in Chennai on Wednesday. Credit: PTI People bring rescued from their water-logged houses during heavy rains in Chennai on Wednesday. Credit: PTI

Chennai: At around 4 pm on the 1st of December, in the midst of heavy rainfall, businessman Ekambaram Goda’s household help informed his wife that the police had asked residents of a slum near Burma Colony to vacate their homes. “She told us that the police had said the river could rise to seven feet,” said Goda, 54, resident of Defence Colony, an expensive residential area on the banks of the Adyar river. “No one came and told us anything, so we thought it was a rumour.”

The Goda family suffered a power cut around 6 pm the same day and decided to head to bed by 8 pm. By 3 am, they woke up to water rising inside their bungalow. By 10.30 am, they were on their terrace, with 12 feet of water all around them. The Godas were rescued by Army boats 36 hours later. “No one was informed,” fumed Goda. “No one in my entire street knew or thought such a thing would happen,” he said.

Over a week after the flood of  December 2, questions are now being raised as to what caused the deluge. Sources within government told The Wire that although an alarm was sounded off to release water from the brimming Chembarambakkam reservoir on November 30 itself, the secretary of the Public Works Department awaited a green signal from the chief secretary of the state. The chief secretary in turn appears to have delayed the nod. What is mysterious is why the state’s top bureaucrat was even involved in what should have been such a routine matter.

“Especially during the monsoon, the standard operating procedure is that only the executive engineer and not even the PWD secretary can take the decision of releasing water from reservoirs,” said a source within the PWD on condition of anonymity. “There has been upward delegation where it is not required,” he said.

Once released, water from Chembarambakkam lake, 23 kilometres from Chennai, takes 3-4 hours to travel to the city. Standard operating procedure dictates that the PWD inform the Chennai district collector’s office and the Corporation of Chennai about the release of water. The collectorate then issues flood alerts or warnings to the corporation, police, fire services and the media in case evacuation is necessary. As detailed elsewhere, no information was made available to the media and the public about the potential release of a massive 29,000 cusecs of water.

The Wire spoke with senior officials of various departments to find out whether they had been informed about the release of this large volume of water into the Adyar river. Most officials wished to comment only on condition that their identity not be revealed.

Senior Chennai city police officers confirmed that the message about the release of 29,000 cusecs of water was relayed over the wireless to policemen on the ground at around 8pm on the 1st of December. “The message that came over wireless was that the water had already been released,” said one officer. “We were asked to evacuate those living along the Adyar river banks.” This meant that there was a mere four-hour window in which the police, fire services and rescue teams as well as civic authorities could go door to door and warn residents of an impending disaster.

Reports from various areas a week after the flood confirm that the police and fire services personnel did manage to reach some areas in time to pass on the warning. Residents in areas like Manapakkam and a part of Defence Colony were informed. Many did not take the warning seriously and refused to leave their homes. The clock was ticking too fast.

The Wire checked with senior officials in various departments about whether they had received information about the impending floods. Tamil Nadu Generation and Distribution Corporation (TANGEDCO), which supplies electricity to the city, was not warned to switch off power supply in areas which were likely to be hit by flooding, in order to avoid the risk of electrocution, according to officials in the know. The municipal administration and water supply department too were not notified. In most departments, officials watched the news of the flooding on television and contacted the corporation and collectorate to confirm whether there was indeed a problem.

Senior officers in the Army and Navy were unable to specify the exact time their assistance in rescue operations was requisitioned by the state government. “We have been here from the 15th of November onwards,” said a senior Navy officer who did not wish to be named. “We asked the state government if they needed our help. They agreed and we moved in,” he said. District authorities at Kanchipuram stated that they had forwarded a request for Army support on the 1st of December itself to the state government.

The National Disaster Response Force (NDRF), which had assisted in rescue operations during flooding in the middle of November, had come in on the 14th and left the state on the 18th of November. A senior officer of the NDRF said that the request for NDRF support had come in from state government at around 6 pm on December 1. Close to 2,000 NDRF personnel arrived in the city by the evening of the December 2 from other states, at least 12 hours after the flooding began.

Shockingly, the Coast Guard appears not to have been contacted at all by the state government.

“The Coast Guard gathered its resources to chip in with rescue and relief operations voluntarily with the limited resources at our disposal,” said S.P. Sharma, commander, Coast Guard Region-East. Top officers in the Coast Guard themselves contacted the Director General of Police of Tamil Nadu and the Chennai city Commissioner of Police, offering their services. A senior officer, speaking on condition of anonymity, said that they were unaware of the impending flood. “Our helicopters are stationed near the Meenambakkam airport,” said the officer. “The flood waters entered the air base, damaged our craft and we were unable to use them. We requisitioned three helicopters and an Advanced Light Aircraft from other stations like Goa and Porbandar in Gujarat,” he said.

The State Disaster Response Force (SDRF), a new small force of around 166 personnel, deployed itself in eight teams across Chennai, Cuddalore and Villupuram on the morning of November 30 itself. “We were on alert since the 14th of November itself,” said Santosh Kumar, Superintendent of Police at the Tamil Nadu Commando Force, who doubles up with the SDRF. “We deployed by ourselves on the morning of the 30th. The locations where we were to move was decided by the DGP,” he said. Kumar added that his team rescued around 4,700 people during the floods.

Once these rescue agencies were in, however, confusion prevailed. “No central control room was set up by the Tamil Nadu police,” said a senior officer in the police force. “Each agency was doing its own thing. In my area, I had no idea who all were working – NDRF, Army or Navy. We went about our own rescue operations regardless,” he said.

The Coast Guard officer too confirmed the same. “The Army, Navy, Air Force, Coast Guard all coordinated with each other informally,” said the senior officer. “There were no directions from state police. We got calls from the public and we moved to those areas based on calls received. At the ground level, our personnel coordinated with police personnel on the ground,” he added.

Neither the DGP nor the Chennai Police Commissioner responded to queries on this allegation of a severe lack of coordination and communication between various rescue agencies.

The chief secretary as well as the PWD secretary were unavailable for comment on any of the points raised.

The picture emerging in the aftermath of the devastating flood that hit Chennai is one of inefficiency, delays in taking crucial decisions and a hamstrung leadership that floundered once calamity struck. What actually went wrong – from decision making to coordinating rescue and relief – is something that the state government would need to investigate to ensure no repeat in the future.

As Chennai limps painfully back to normalcy, the affected, like Ekambaram Goda, are furious. “They should have informed us at least,” he said. The deluge would still have happened, but it might not have turned into a tragedy of monumental proportions.

Sandhya Ravishankar is a freelance journalist in Chennai.