A corpse in the next bed. Three hours for paperwork as a patient suffocates. Mani Bhushan’s video shows the reality of the pandemic in Bihar. 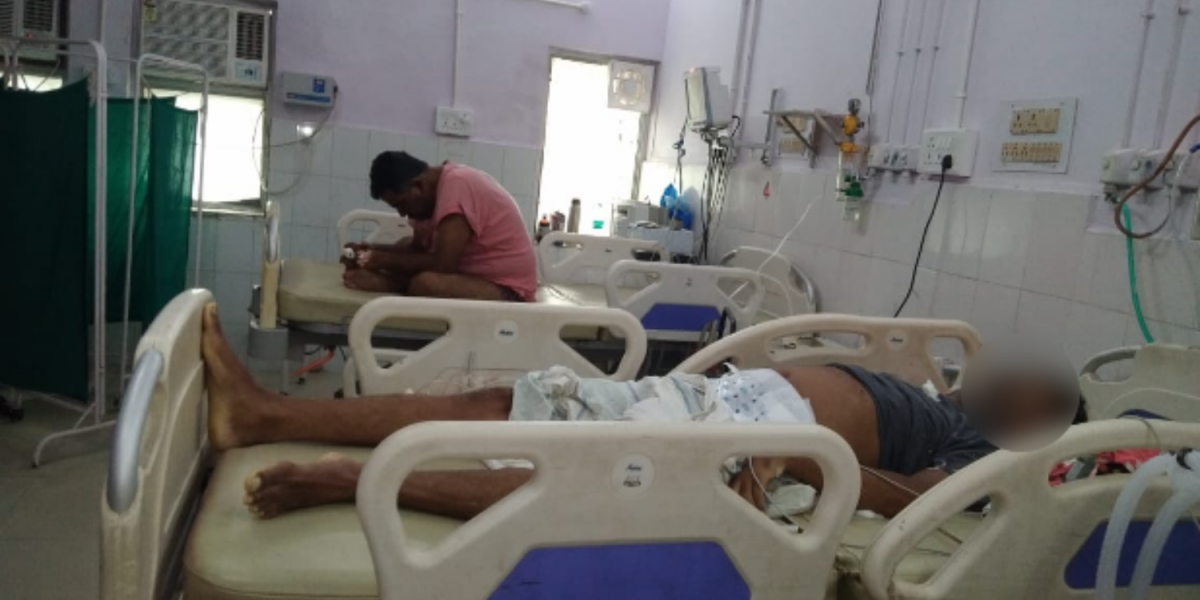 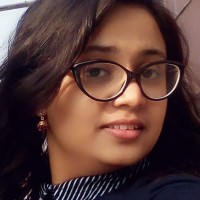 Patna: When Mani Bhushan, the son of a coronavirus patient at Nalanda Medical College and Hospital (NMCH), Patna, couldn’t take the apathy of the hospital staff towards COVID-19 patients any longer, he decided to shoot a video and upload it on the internet. The video went viral, tearing into pieces the Bihar government’s claims of efficiently handling the pandemic.

Bhushan documented scenes of COVID-19 patients lying next to corpses. He focused his camera on life-support machines that were not functioning properly, but which continued to be hooked to patients.

As the reach of the video spread on social media, shared widely by people including Tejashwi Yadav, leader of the Rashtriya Janata Dal, Bihar’s opposition party, Mangal Pandey, Bihar’s health minister, told the mainstream media that the hospital was “following all the protocols”.

However, according to Bhushan, his video showed only one aspect of the alleged mishandling of the pandemic in Bihar. What he went through merely to have his father tested for the virus showed that chief minister Nitish Kumar’s claims that Bihar is giving its all to fight the virus are words unsupported by on-ground action.

When Bhushan first suspected that his father, Awdhesh Singh, had been infected by the virus, he went to several private hospitals in Patna. “No private hospital admitted my father so I had no option but to take my father to Patna Medical College and Hospital (PMCH),” he said.

PMCH admitted Singh, but without even testing him, the hospital placed him among the COVID-19 positive patients, said Bhushan.

“I was with my father throughout and they only tested him after several requests from us and a lot of pressure,” he said. “The test results came after three days, which is the height of neglect. You want the test results to come as fast as possible, to have the maximum time possible to save the patient.”

As a COVID-19 positive patient, Mani’s father was shifted to the NMCH, a hospital dedicated to patients of the COVID-19 virus. In the ambulance on his way to the NMCH, Singh’s condition deteriorated rapidly. His pulse rate fell to 55 beats per minute.

Once at the NMCH, it took three hours to shift Singh from the emergency ward to the Respiratory Intensive Care Unit (R-ICU), which is just two minutes away.

“They took three hours for paperwork,” said Bhushan. “It was frustrating because my father needed oxygen. His condition was getting worse; he was suffocating.”

When he entered the R-ICU, Bhushan was shocked to see a dead body on the bed next to the one allotted to his father. Not only was the corpse there on Singh’s arrival, it remained there for two days longer, even after several complaints and another death in the ward.

In fact, the two corpses were removed only after the two days it took for Bhushan’s video to go viral.

It wasn’t just the dead bodies that caught the attention of those who viewed the video. The poor condition of the life-support machinery in the ward was displayed when Bhushan focused his camera on an electrocardiogram (ECG) machine attached to a patient that showed only straight lines. On an ECG machine, straight lines signify that the patient is dead. But the patient concerned was sitting upright, clearly alive.

“I thought I had seen the worst at the PMCH. But the NMCH turned out to be way more pathetic in terms of the conditions of the hospital, the facilities available and the behaviour of the staff,” said Bhushan. “The dead bodies remained there even after several complaints. Nurses refused to listen to any of our grievances and requests. They said they couldn’t do anything because they didn’t have PPE kits themselves and feared being infected by the virus. And there were no doctors on duty.”

If the condition of two of Bihar’s top-rated government hospitals is bad, the reaction of the NMCH administration to Bhushan’s allegations is worse.

When I told him that number I had dialled was listed in the Bihar government’s health department directory as belonging to the superintendent of the NMCH, he said once again that I had called the wrong number and hung up the phone. He did not answer the phone again.

There are only two logical conclusions I can draw from the behaviour of the person who answered the phone. Either the Bihar government provided false information on its official website by listing the wrong contact details for the superintendent of the NMCH, or the person who answered the phone was lying. Either way, the people of Bihar have no way to reach the superintendent of the NMCH.

Next, I tried to contact the health minister, Mangal Pandey. But Pandey disconnected the call the moment I began asking questions.

In a tweet on May 7, Pandey had claimed that 10 crore and 11 lakh [10,11,00,000] people in Bihar had been tested for the virus almost overnight. Later, even after Bhushan’s video displaying the conditions at the NMCH went viral, Pandey claimed that the hospital “follows all the protocols”.

Bihar’s deputy chief minister, Sushil Kumar Modi, also made large claims. On July 7, he said in a Facebook post that more than 9,000 samples were being tested every day. However, in the period between June 25 and July 7, the number of tests in Bihar hit the 8,000 mark only twice, according to the Bihar government’s own health department.

Though the number of COVID-19 cases rises every day in Bihar, testing the population for the virus has actually decreased, according to a NITI Aayog report, which said Bihar ranks the lowest among 19 states in terms of testing. Only 2.75 lakh tests were conducted in Bihar between March 22, when the first COVID-19 positive case in Bihar was reported, and July 4. Instead of intensifying testing in Bihar, the government went into reverse. On June 30, 8,231 tests were conducted. The number then decreased steadily to drop to 5,168 tests on July 7. When COVID-19 positive cases increased by more than 1,000 a day on July 11 and 12, the government conducted a little more than 9,000 tests on July 13. This showed a high positivity rate for the state. The number of new cases on July 13 and 14 also climbed past the 1,000 mark.

Even before the pandemic hit India, Bihar’s health system was in urgent need of repair. The state’s doctor to patient ratio is the worst in the country: just one government doctor caters to more than 28,000 patients. This means Bihar does not have the capacity to deal with a pandemic, particularly one as bad as the novel coronavirus. In July 2019, while responding to a notice from the Supreme Court about the deaths of more than 150 people in Bihar from encephalitis, the state government had said its health infrastructure was inadequate to deal with a crisis such as a breakout of acute encephalitis syndrome and submitted an affidavit stating that only 43% of the sanctioned strength of doctors, 29% of nurses and 28% of lab technicians were available in government hospitals.

This lack of medical staff, combined with a dearth of beds (11,664), ICUs (583) and ventilators (292) in the government hospitals, means Bihar’s population of nearly 10 crore faces immense problems when infections spread.

Does Bihar not have a health budget or resources? It does. Every year, it receives funds as part of the National Health Mission (NHM). But every year, it fails to utilise these funds fully. In 2019-20, the state government demanded Rs 3,300 crore from the Centre under the NHM, but spent only about 50% of the amount. Given the lack of medical staff and dearth of equipment and facilities at government hospitals, this indicates incompetence more than anything else.

Though the Union health ministry stresses boosting immunity to fight the COVID-19 virus, the state NHM has not been able to make even one out of 598 designated Health and Wellness Centre fully functional, even a year after it announced that such centres would be constructed.

Not only did the state not utilise 50% of the NHM funds, it also did not utilise the funds allocated to it under the health insurance benefit scheme of the Ayushman Bharat Mission. Though Bihar has 10.8 million eligible beneficiary families, the state could only ensure 50,369 hospital admissions during the financial year of 2017-18, with claims of merely Rs 51 crore.

This poor use of the health insurance benefit meant that the Centre could release only Rs 88.27 crore to the state under this scheme for 2018-19.

In the past few years, Bihar’s health budget has remained at about 4-5.2% of the total budget. Even this financial year, the government has allocated only 5.2% of its total budget on health, which is marginally lower than the average allocation of 5.3% for health by other states.

With nearly 50% of medical posts vacant, non utilisation of funds from the Centre and just a meagre allocation of its total budget to health sector, it seems quite clear that Bihar is not prepared to deal with any kind of health emergency.

Bihar also has a ‘first among unequals’ situation playing out during this pandemic. While the state suffers from a shortage of medical staff, chief minister Nitish Kumar, who had promised to ensure 15,000 coronavirus tests daily, quarantined himself at his residence on July 6 after a relative tested positive for the virus, with three separate teams of doctors from the PMCH in attendance.

According to opposition leader Tejashwi Yadav, when Nitish Kumar was tested for the virus, his report was released in just two hours. It was negative. Bhushan’s father had to wait for three days to learn whether he was positive for the virus or not. He tested positive.

In his novel Animal Farm, Bihar-born author George Orwell said: “All animals are equal, but some are more equal than others.”

The pandemic has personified this sentence, at least in Bihar.

Reetu Rohini is a freelance reporter who has contributed to The Wire and Article 14.