Will Modi Be Able to Provide Housing For All?

A number of internal loopholes within the Housing for All scheme seems to be denying housing to those who need it most. 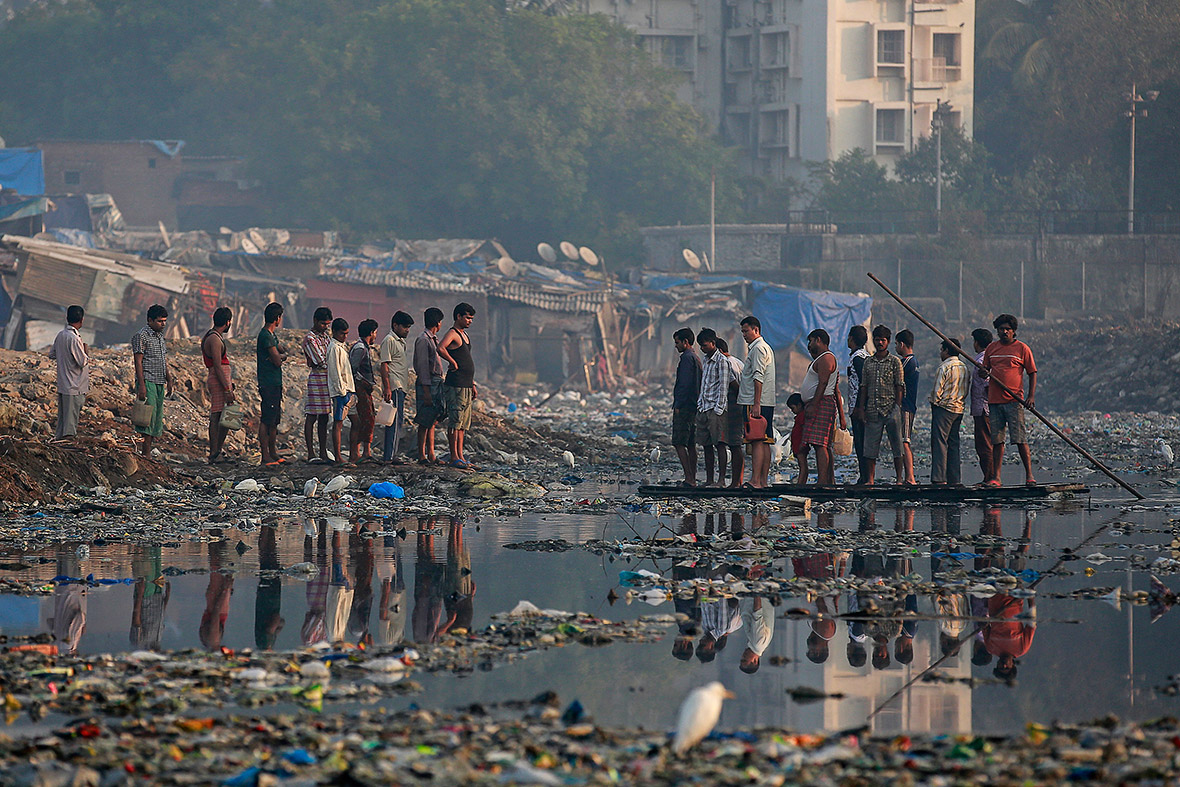 Residents pay two rupees (about 2p) to use an improvised raft to cross a sewage canal at a slum in Mumbai. Credit: Danish Siddiqui/Reuters

“We have a dream for 2022. The poorest of poor should have a house of his own. And that house must be equipped with electricity, water and other facilities. There should be hospitals and schools in the neighborhood”. This is what Prime Minister Narendra Modi said on the occasion of Ambedkar Jaynati. Noble sentiments these, but will this dream come true?

In Mumbai, in the aftermath of the municipal corporation election in February, different authorities have been demolishing more and more slums in the city; most of them remain unreported. Recently, in the city’s Andheri West area, authorities showed up with bulldozers and, without any warning, evicted hundreds of families from their homes. Many children of this community were appearing for exams at the local municipal school at the time.

In Vakola, pavement dwellers, including two city contract workers and their two-day-old infant, found their homes destroyed before the prime minister’s convoy passed through the area.

The city’s slums are homes to sweepers, maids and drivers, but also white collar workers. If you live in a high-rise apartment building or bungalow in Mumbai, chances are you depend on a small army of slum dwellers to do all the jobs you don’t want to do – or don’t have time for.

But we must ask the question: where do families living under the flyover, or in the basti next to apartment buildings go? What alternatives are there for the more than 50% of Mumbaikars who live in informal housing? And this isn’t just a Mumbai specific issue. With the rush to build smart cities, what will happen to those who live in slums in those towns and cities? Where do they fit into the larger scheme of things?

The scheme – ‘Pradhan Mantri Awas Yojana-Housing For All’ – has four provisions. The first provision provides for a house to slum dwellers through slum rehabilitation schemes to be carried out by a private developer. The goal is to re-house slum residents in multi-storey rehabilitation buildings while using the remaining land of the slum to construct residential/commercial buildings for selling flats in the open market. Second: there is an interest rate subsidy for a home loan for weaker sections; for up to 6 lakhs the interest rate will be 6.5%. Third, 35% of the housing in a particular project will be reserved for economically weaker sections (EWS), and each beneficiary will get a Rs 1.5 lakh subsidy. And fourth, the central government offers a subsidy for a beneficiary-led individual housing construction.

Let us analyse the ‘Housing for All’ Scheme with an example. According to the Minimum Wages Act, the highest salary an unskilled sweeper can make is Rs 8238.25 per month. Someone living on this salary cannot possibly benefit from the scheme.

This is because, under the first provision, only those slum dwellers will get an alternative housing who will qualify the eligibility criteria. The eligibility is decided on the basis of a cut-off-date. Only those people who can show they have been living in their current home (where the rehabilitation scheme is proposed) prior to the cut-off-date, are eligible as the beneficiaries of the scheme. However, often families who have lived in the same slum for years and decades have been victims of frequent demolitions, due to which, even if they keep rebuilding their houses on the exact same plot, a lot of paperwork which is necessary to prove eligibility, goes missing during the chaos of these demolitions. Without these documents – like water bills and electricity books – it is difficult, if not impossible, to prove legitimate residence.

This is a dilemma: to prove residence and thus eligibility, the resident needs a water/electricity bill, but to get a water/electricity bill, he needs to prove residence. This cut-off-date condition will not only render a large number of slum residents of that particular slum where the rehabilitation scheme will be carried out as ‘ineligible’ but it will also dis-house them when new buildings are constructed. Others may move into this new housing.

Under the second provision, the EWS are defined as those households that have an annual income up to Rs 3,00,000 and lower income groups (LIG) are defined as those households that have an annual income between Rs 3,00,001 up to Rs 6,00,000. The guidelines further say that, “The credit linked subsidy will be available only for loan amounts upto Rs 6 lakhs and additional loans beyond Rs 6 lakhs, if any, will be at nonsubsidized rate”. This means that the beneficiary will get a loan at lower interest rate than he or she would get normally. The maximum loan amount is 6 lakhs, though there is virtually  nothing available in the housing markets in the bigger cities. Now even homes in the far flung northern suburbs of Mumbai are out of reach for anyone in the EWS or LIG segment.

Let’s suppose the government increased the loan amount to  Rs 10 lakh, and waived the interest altogether. Even so, the EMI would be Rs 5,500 per month at minimum, for the loan to be repaid in 15 years. Add to that the maintenance costs of Rs 1,500 per month for living in an apartment building. This sum of Rs 7,000 would be impossible to pay for the unskilled sweeper getting paid a maximum possible salary of Rs 8,238.

Finally, the fourth component of the ‘Housing for All’ scheme is designed to help people repair or redevelop dilapidated housing. In order to benefit from this part of the scheme, a person has to own the plot of land on which their house is built. This rules out slum dwellers for the obvious reason that their homes are built on government (or occasionally, private) land.

Every provision of this scheme leaves loopholes that cast doubts over the scheme’s bold title: ‘Housing for All’. The scheme might cater to one section of society that has a certain income level, but it overlooks vast numbers of people in the bigger cities. In Mumbai, for example, over 60% of residents live in informal housing.

India needs a law that recognises housing rights as basic human rights. After her mission to India last year, Leilani Farah, the UN Special Rapporteur on Adequate Housing expressed the importance of such a law in her report in the 34th session of the UN Human Right Council on March 1, this year. Such a law should ensure protection of minimum shelter to the neediest person to make sure he or she lives a dignified life.

Absence of such legal provisions will continue to pose the constant threat of eviction of people living in informal settlements. Demolitions are not a sustainable solution. Boldly promising them houses without putting in place the policies to make this happen  will only mean that the Housing for All mission, will never be fulfilled.