The Centre has said it has not received "authentic claims" from the state. 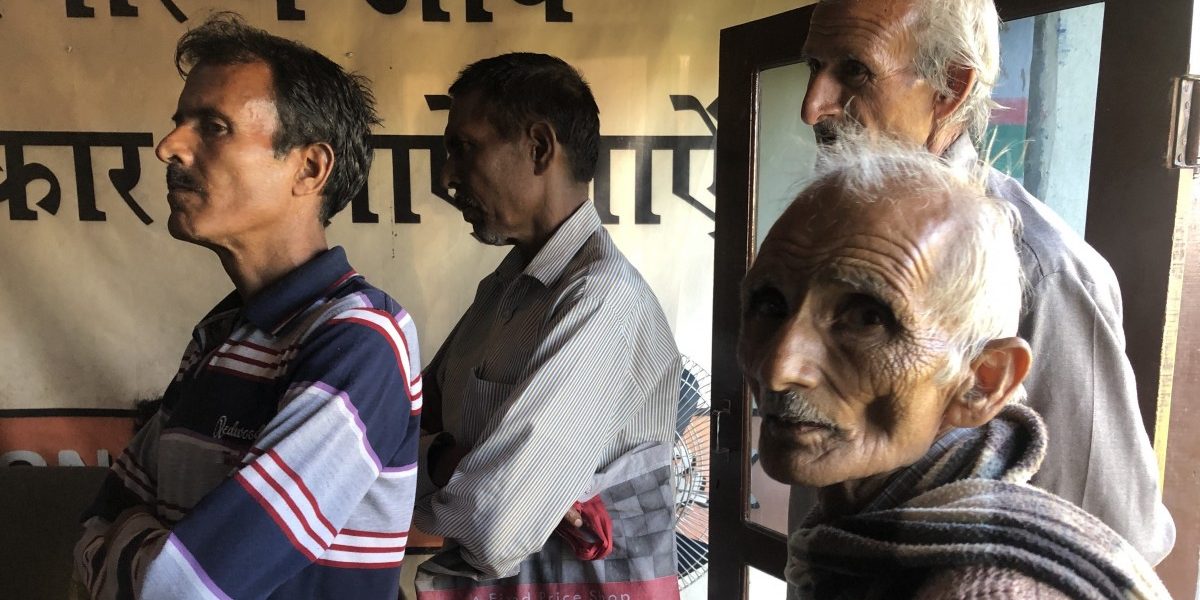 Jammu: Saying it did not receive authentic claims, the Union home ministry has shelved a Rs 200-crore package for the relief and rehabilitation of West Pakistan refugees living in the union territory of Jammu and Kashmir since 1947.

As per the Citizenship (Amendment) Act, Hindus and other minorities from Pakistan, Afghanistan and Bangladesh will have special citizenship rights in India. But West Pakistan refugees – almost entirely Hindus and Sikhs – living in Jammu and Kashmir since 1947 without property rights and voting rights in the assembly elections up until August 5, 2019 have now lost their relief package, on account of unavailable documents.

This admission was made by the Union home ministry before the Rajya Sabha’s Parliamentary Standing Committee on Home Affairs. The committee, in its 224th report on the Union home ministry’s demand for grants for the year 2020-2021, had asked the MHA why there was a decrease in the allocation of funds for the relief and rehabilitation of West Pakistan refugees.

It added, “Authentic details of beneficiaries have not been finalised by the J&K Government under the scheme namely Financial Assistance to families of West Pakistan Refugees settled in J&K. Hence, BE 2019-20 allocation of Rs 200 crore has been reduced to a token amount of Rs.1.00 crore.” This comes at a time when these refugees have got citizenship rights in Jammu and Kashmir, which had been denied to them since the year 1947, when they first arrived here from West Pakistan.

These refugees anticipated that it would be smooth sailing for them now, after the dilution of Article 370 and abrogation of Article 35A. But allocation of funds for West Pakistan refugees was drastically decreased from Rs 200 crore to Rs 1 crore. These refugees claim that they are yet to receive any relief or rehabilitation from the Central government.

The reason given was the non-receipt of “authentic claims” from the state government of Jammu and Kashmir. This state government, within three months of announcement of the package, had started the procedure of issuing ‘identity certificates’. However, even after three years, families have not received the money because of mandatory document requirements.

“Previously, the state government wanted us to produce electoral rolls from 1951 and 1957 with our names even though elections here did not happen until 1967. Now with much difficulty, after months of struggle, we managed to get that formality scrubbed off,” said Labha Ram Gandhi, chairman of the West Pakistan Refugees Action Committee (WPRAC). The West Pakistan refugees had demanded the appointment of a relief commissioner who would address these issues and ensure disbursement of the compensation as soon as possible. 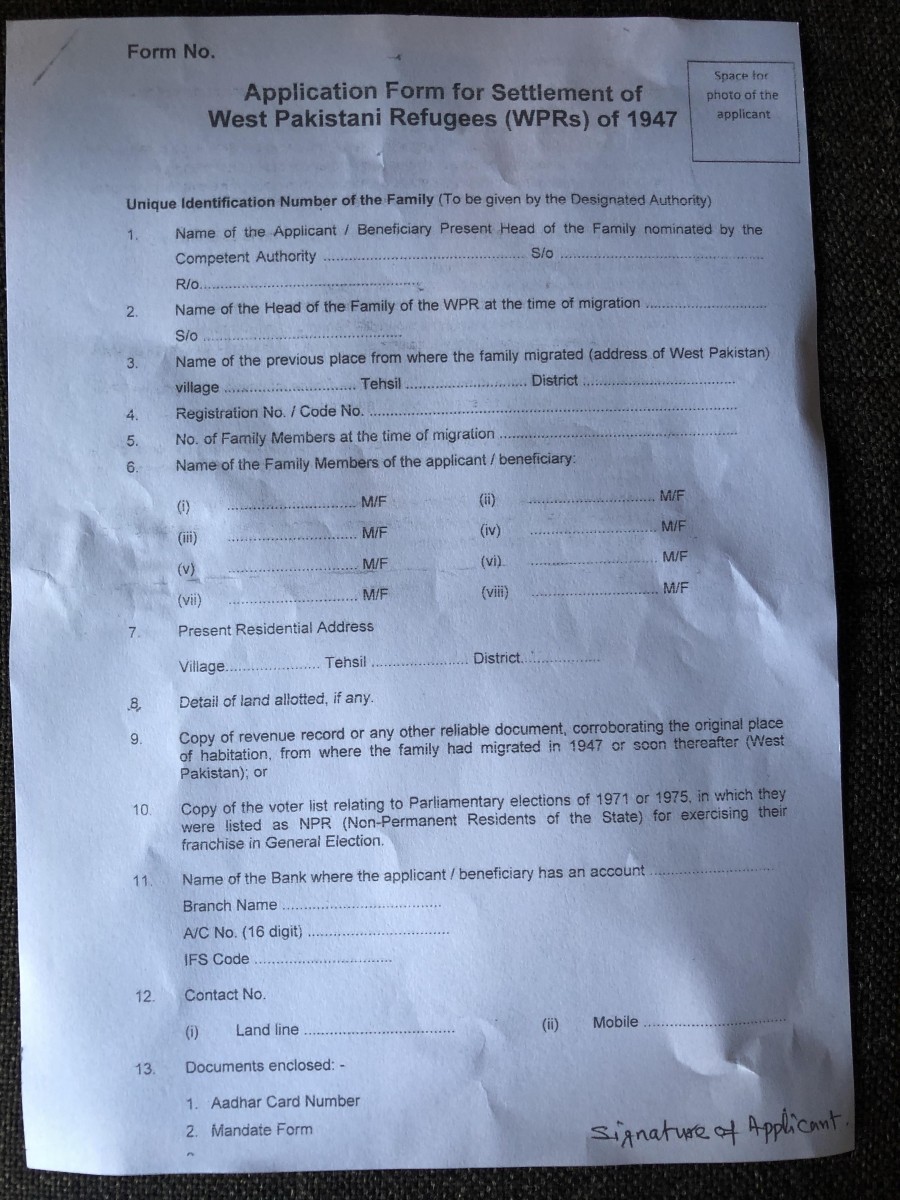 The application form for settlement of West Pakistani refugees.

But the application form for the settlement of West Pakistani refugees still mandatorily requires them to attach other documents, which are obtained with much difficulty or are impossible to acquire, such as a legal heir certificate and succession certificate, a copy of revenue record or any other reliable document corroborating the original place of habitation (from where the family had migrated in 1947 or soon thereafter).

“When these families left their homes, they were running for their lives. If they had stopped to gather documents, half of them would not have made it alive,” said Labha Ram. Another document which can be attached, as a replacement of the copy of revenue record, is a voter list relating to parliamentary elections of 1971 or 1975, in which they are listed as NPR (Non-Permanent Resident of the State) for exercising their franchise in the general elections.

“It becomes impossible for us to understand how this will help the state government differentiate between West Pakistani refugees and other people from Punjab or Odisha who have also been mentioned as NPR in the voter list,” Gandhi said.

On being asked the package being shelved, he said “I cannot believe it. I will have check with the concerned agencies. Previously, we were worried as to how we will arrange the documents required, and now the situation has gone from bad to worse.” He said that the struggle would continue till the time West Pakistani refugees do not get their due share.

As per the report of the Wadhwa Committee of 2007, constituted by the government of J&K, around 5,764 families consisting of 47,215 persons migrated from West Pakistan and got settled mainly in different areas of Jammu, Kathua and Rajouri districts of Jammu. No land was allotted to them by the state government. However, these families had occupied 45,466 kanals of land (state land worth 10,478 kanals, evacuee land including other types of land of 25,976 kanals and other land of 10,012 kanals) which was allowed to be retained by them, even though they weren’t given titles, because of their NPR status.

They were allowed to keep land up to 12 acres of khushki (unirrigated) land or eight acres of aibi (irrigated) land. As a result, 46,466 kanals of land stands retained by these refugees under Cabinet Order No. 578-C of 1954. Gandhi claims that during the last 72 years, the number of these families has gone up and there are now about one lakh people. Ninety percent of these refugees are Hindus and 10% are Sikhs.

Though no formal order has been issued, legal experts opine that West Pakistani refugees are now residents of the state in terms of the Indian constitution. West Pakistani refugees families are now eligible to avail benefits of various social welfare schemes launched by the government, and members of their families can now seek government employment in the state, besides getting admissions in various professional colleges.