The notice was reportedly sent hours before Bengal CM Mamata Banerjee announced that Alapan Bandopadhyay would retire and turn down the Centre's recall of him. New Delhi: The Union home ministry, on May 31, served a show-cause notice to former West Bengal chief secretary Alapan Bandyopadhyay for not attending a meeting chaired by the Prime Minister, under a stringent provision of the Disaster Management Act that entails imprisonment up to two years.

The notice was served on Bandyopadhyay hours before Chief Minister Mamata Banerjee announced that he would retire and not report to the Centre in response to its hasty recall of him.

Bandopadhyay had been thrust in a power tussle after the central Department of Personal Training (DoPT) controversially recalled the top officer days after it had approved a three-month extension of his tenure in view of his role in tackling the aftermath of Cyclone Yaas and the COVID-19 crisis.

The Centre’s recall of Bandyopadhyay came after the bureaucrat, along with the chief minister, did not stay for the full duration of a meeting held by Prime Minister Narendra Modi on the cyclone’s impact. While Banerjee has held that there were a number of reasons why she could not stay at the meeting, the Bharatiya Janata Party’s senior leaders have been vocal about the alleged snub.

Bandyopadhyay was due to retire on May 31. By retiring on the date, he has, in effect, turned down the extension sanctioned by the Central and state government.

A home ministry official told PTI that Bandopadhyay had been showcaused “for refusing to comply with lawful direction of the central government in violation of Section 51-B of the Disaster Management Act, 2005.”

“The officer has been asked to reply within three days to the notice,” the unnamed official told PTI.

According to Section 51 (b), “Whosoever refuses to comply with any direction given by or on behalf of the central government or the state government or the National Executive Committee or the State Executive Committee or the District Authority under this Act, shall on conviction be punishable with imprisonment for a term which may extend to one year or with fine, or with both.”

“And if such obstruction or refusal to comply with directions results in loss of lives or imminent danger thereof, shall on conviction be punishable with imprisonment for a term which may extend to two years…,” the Act says.

The Union Home Secretary is the chairman of the national executive committee under the Disaster Management Act, which is currently in force due to the COVID-19 pandemic until June 30.

The Hindu has noted in its report on the development that, “Though the DoPT is the cadre-controlling authority of Indian Administrative Service (IAS) officers, the show cause notice was served under provisions of the DM Act, which is under the purview of the Home Ministry.”

The showcause notice mentions that Bandopadhyay “abstaining himself” from a meeting chaired by the head of the National Disaster Management Authority, the Prime Minister, amounted to the violation of the Act. 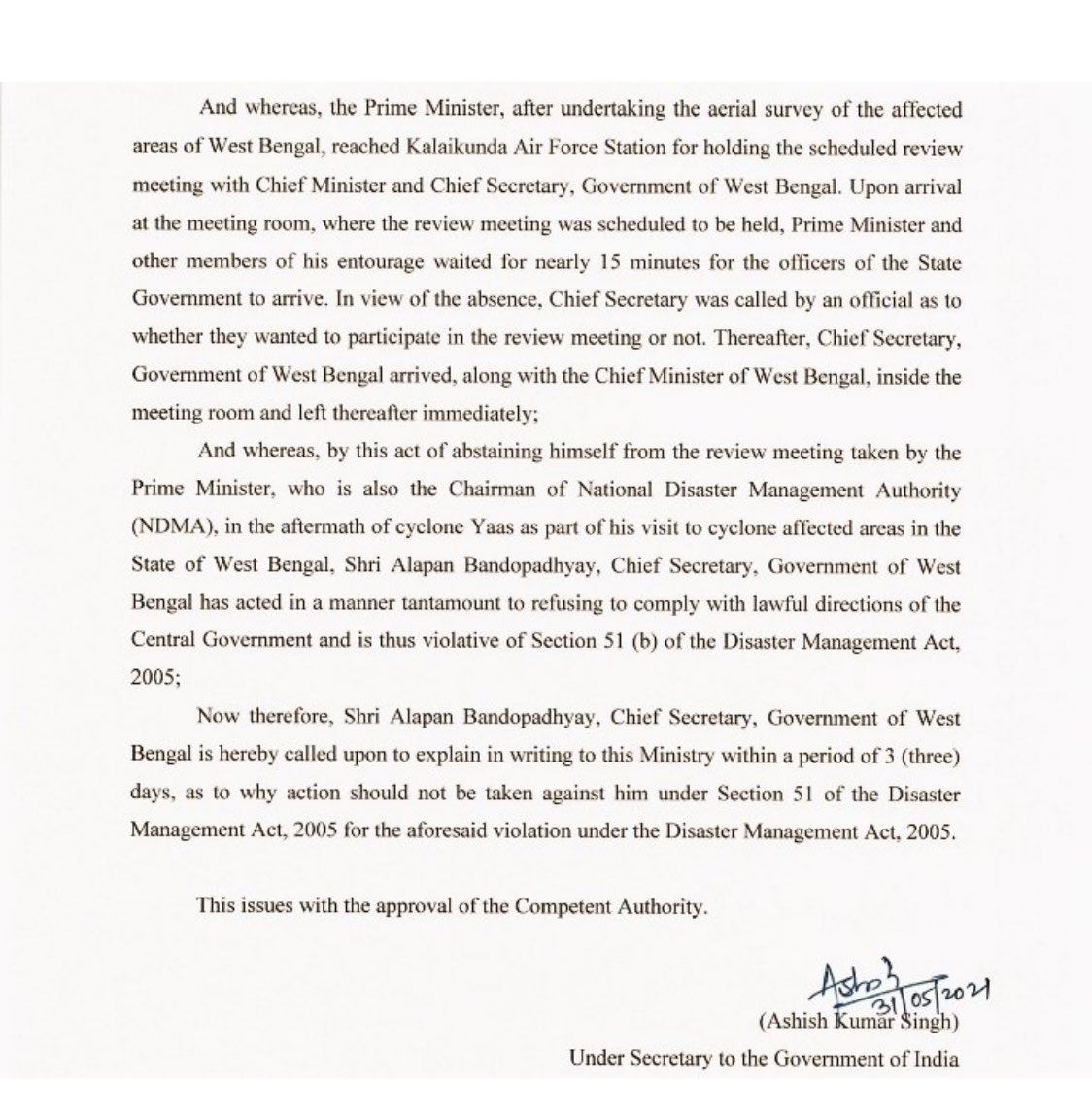 Speaking to The Wire, senior advocate at the Supreme Court Gopal Sankaranarayanan said that the show-cause notice issued to the chief secretary of the Bengal government is sketchy because it does not clarify which direction under the Disaster Management Act Bandyopadhyay is supposed to have violated.

“What was the direction given to the chief secretary which he presumably violated? The show-notice itself admits that he was there at the May 28 review meeting conducted by the Prime Minister, and he left after 15 minutes along with the chief minister. Which is the direction that he violated under the DM Act? The direction itself is not referred to,” he said.

“Did any such direction convey to the chief secretary that he has to attend the meeting, and that he has to be present there for more than 15 minutes?” he asked.

“Secondly, and more importantly”, Sankaranarayanan said, “The Prime Minister has no legal authority to give directions to the chief secretary of the state. He is merely a component of the central cabinet. He can’t give directions directly to the officers of the state government. The directions have to go through proper protocols.”

He emphasised that the chief secretary of the state is bound by law to follow instructions of the chief minister, not the Centre.

Questions regarding the invocation of the Disaster Management Act by the Centre have also surfaced in multiple discussions.

On May 28, Prime Minister conducted a review meeting to discuss the impact of Cyclone Yaas, which has not yet been declared a disaster either by the Centre or the state government.

In addition, Banerjee has said that she and her team arrived late in the meeting because of the Prime Minister’s security protocols, and that she had in fact arrived at West Medinipur’s Kalaikunda, where the meeting was scheduled, on time.

She had further said that due to the delay caused by the PM’s security personnel, she had to leave the PM’s review meeting early to attend another scheduled state government’s meeting to assess the impact of the cyclone at Digha.

However, she added that she handed over a list of demands to the Prime Minister and requested a relief package worth Rs 20,000 crore.

On Tuesday, Banerjee repeated that she and her team were delayed by Prime Minister Modi’s security protocol and said that they had been waiting for a while before they could reach the meeting spot.

“First, we went to Hingalganj, then we went to Sagar Island. Why were we late, whose fault was it? You can ask the local reporters, the administration and ATC control. We got the information that we need to wait 20 minutes there (Sagar island), because the prime minister’s helicopter will be landing. Only after the PM’s helicopter landing is complete, will we get permission to proceed. So we waited for 20 minutes. Even when we were flying, our helicopter was made to hover for around 10 minutes, maybe because of security reasons. I don’t mind that. We don’t have any objection to that as it is because of the prime minister’s security, we give priority to that. Once we reached the venue in Kalaikunda, we came to know that the prime minister had already started the meeting,” she said.

Once there, Banerjee says she and Bandopadhyay were made to wait for 10-15 minutes in a separate room.

” Vivek Sahay director, security asked the SPG to pass the message to the prime minister that the CM wants to meet him for only one minute to hand over the report. The SPG said, “Come after one hour, can’t do anything now.” Through someone we came to know that they are in the conference room. We thought of going to the conference room where the meeting was scheduled. We entered the room with the prime minister’s permission,” Banerjee said.

She added that she had informed the prime minister of her plans and her intention to leave because of bad weather.

“We informed the PM, “We have to visit Digha from here. The weather is not good. We have already visited cyclone affected areas such as Sandheshkhali, Hingalganj, Minakha, and Haroa. Then we went to Sagar, Namkhana, and Patharpratima. The weather was not favourable for flying, still we came here to meet you. So if you don’t mind sir, we want to handover the briefing regarding the cyclone, and report.” I gave the report to the prime minister. He received it. Then I asked, “Sir, with your permission may I leave?” With his permission, we left the venue,” Banerjee said.

Even before news broke of the showcause notice, The Wire and other outlets had reported on former high-ranking bureaucrats noting that such unilateral action by the Centre – to suddenly recall a bureaucrat after granting him extension was indefensible.

At least four bureaucrats went on record noting that the Centre appeared to be out of bounds in attempting to implement a sudden recall as Bandopadhyay’s and held that such a move must be preceded by consultation with the relevant state government and the bureaucrat in question.

Note: This article has been updated since publication with details and opinions on the DM Act.