During the pandemic, the NHM sent acknowledgement letters to firms for CSR donations and to individuals, for contributions. There is reason why the official format used in those letters was not used for Riniki Bhuyan Sarma's firm.

This report is a joint collaboration between The Wire and Guwahati-based news portal The Cross Current.

Read the earlier reports of the series: on ‘urgent’ orders to a firm owned by Himanta Biswa Sarma’s wife Riniki Bhuyan Sarma, the bulk of Assam’s sanitiser orders going to a firm linked to Himanta, and how a businessman close to Himanta’s family received a lucrative PPE order.

Guwahati: On June 1 The Wire and The Cross Current published a joint report on the Assam health department – led by now chief minister Himanta Biswa Sarma in 2020 – granting an ‘urgent’ supply order for PPE kits to Himanta’s wife’s firm without following a tendering or quotation process.

Hours after the report was published, the CM’s wife Riniki Bhuyan Sarma who is the owner of JCB Industries – the company which got the PPE kit order – issued a statement on Twitter claiming that the partial supply of the safety gear made by it to the state chapter of the National Health Mission (NHM) was her business entity’s ‘CSR’ activity.

‘CSR’ is ‘corporate social responsibility’ through which companies contribute to social ends.

Three official orders pulled out of the state NHM’s Inventory Management System explicitly show a reader what the official acknowledgement of a ‘donation’ or ‘CSR’ activity around PPE kits or any other pandemic-related essentials contributed to the health department of Assam looked like.

Additionally, taking help from three state government communications, made available through RTI replies to The Cross Current by the health department, this report will demonstrate how Riniki Bhuyan Sarma’s ‘CSR’ activity was not originally meant to be so.

First, take a peek at this official order below, issued by the NHM director’s office on April 24, 2020, a month after the national lockdown was declared by Prime Minister Narendra Modi. It is an acknowledgement by the NHM of the Tata Trusts’ CSR activity of supplying 25,000 N-95 masks to the state government for free.

The official order, which mentioned the quantity of N-95 masks received from the Tata Trusts, also duly recorded the ‘total amount’ and agreed ‘rate’ sections of it as zero, thus reflecting the fact that the masks were supplied to NHM for free by Tata Trusts.

If this is how the state health department – then under chief minister Himanta Biswa Sarma – issued official acknowledgment letters to a private trust for CSR activity during the pandemic, here is a peek at another such order.

The order below was issued by the NHM director’s office in acknowledgment of a CSR activity by a public sector giant.

In this official letter to Oil India Limited on July 5, 2021, issued by NHM director S. Lakshmanan, the format of acknowledgement of receiving free pandemic-related essentials was the same.

Oil India supplied free 500 oxygen concentrators to the NHM amidst the public health crisis then and the department duly reflected it by recording the ‘total amount’ and ‘rate’ sections of the acknowledgement letter as ‘zero’ – meaning the goods contributed to the department were for free. 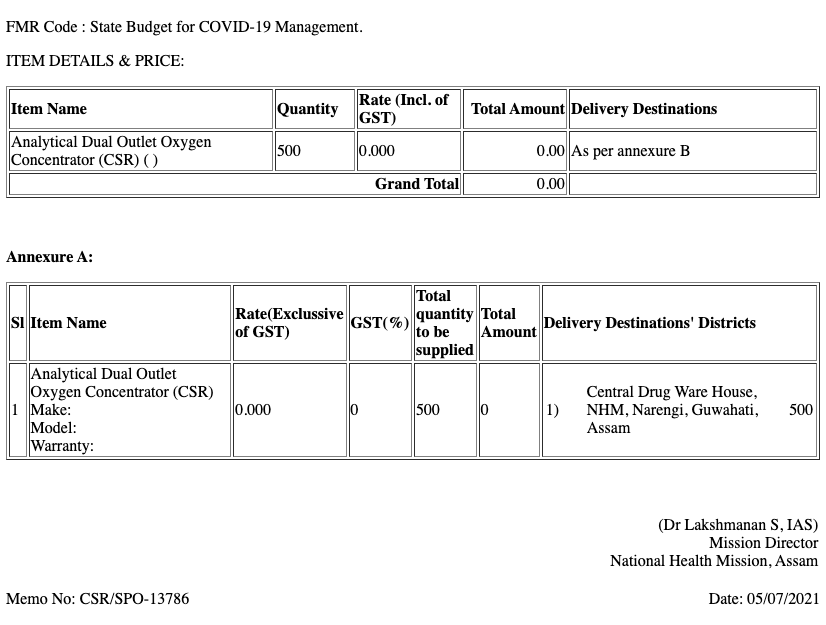 Let us also look at an individual’s donation to the NHM.

This official acknowledgment letter was issued by the NHM director to Pomi Boruah, who was then the officer on special duty to the department.

As stated clearly above in the letter, Boruah contributed 200 PPE kits for free after lockdown – on April 18, 2020. Since this was a donation, the acknowledgment order also duly recorded the ‘rate’ and ‘total amounts’ as ‘nil’.

The text of this “appreciation” letter for CSR activity – seen below – clearly conveys the fact that 1,485 PPE kits supplied by JCB Industries to the NHM had already “served the health workers as well as patients”. This indicates two things:

1. That the intent to turn in the 1,485 PPE kits it had supplied to NHM as part of its ‘urgent’ work order of March 18, 2020, as ‘CSR’ activity was an afterthought and was done before the health department issued payment for that supply.

2. That since those 1,485 PPE kits were received by NHM from JCB Industries as part of an urgent work order for 5,000 of them at the rate of Rs 990 per piece, the official format of the NHM director’s acknowledgment could not be used in this case. 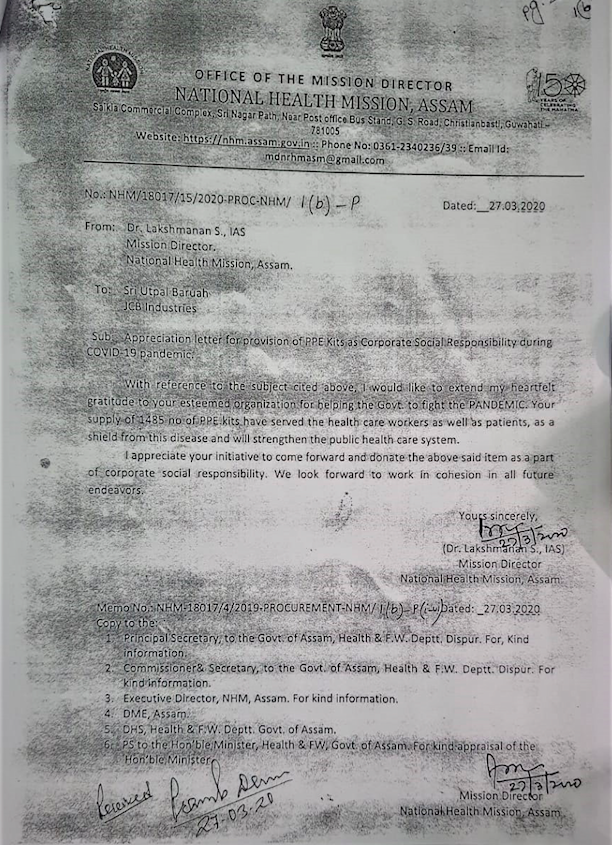 This is also the reason a cancellation order had to be issued to JCB Industries on April 6, 2020 (signed on April 4, 2020) explicitly stating its “failure in supplying the life-saving coverall protection kit in (on) time”.

The order cancellation letter also acknowledged that NHM received “only 1,485 nos [numbers] of kits out of 5000 kits” while also stating that it was a part of a “supply order placed to your company on M/S JCB Industries.” 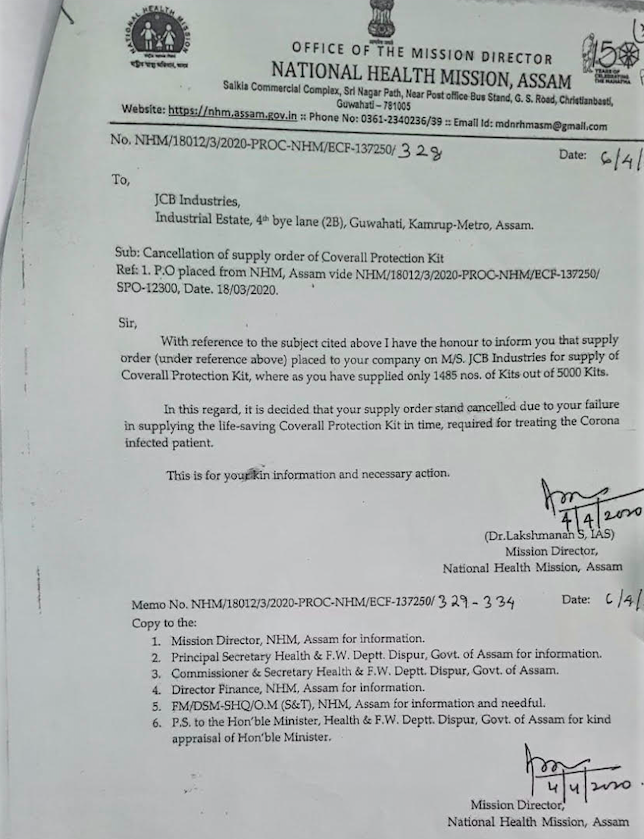 The cancellation order was to officially close the ‘urgent supply order’ issued to JCB Industries for 5,000 PPE kits at the rate of Rs 990 each on March 18, 2020.

Understandably then, in the order issued to the chief minister’s wife’s firm – unlike in the letters issued to Tata Trusts, Oil India and Pomi Boruah – Lakshmanan’s letter mentioned, as can be seen below, the rate and the total amount sections. 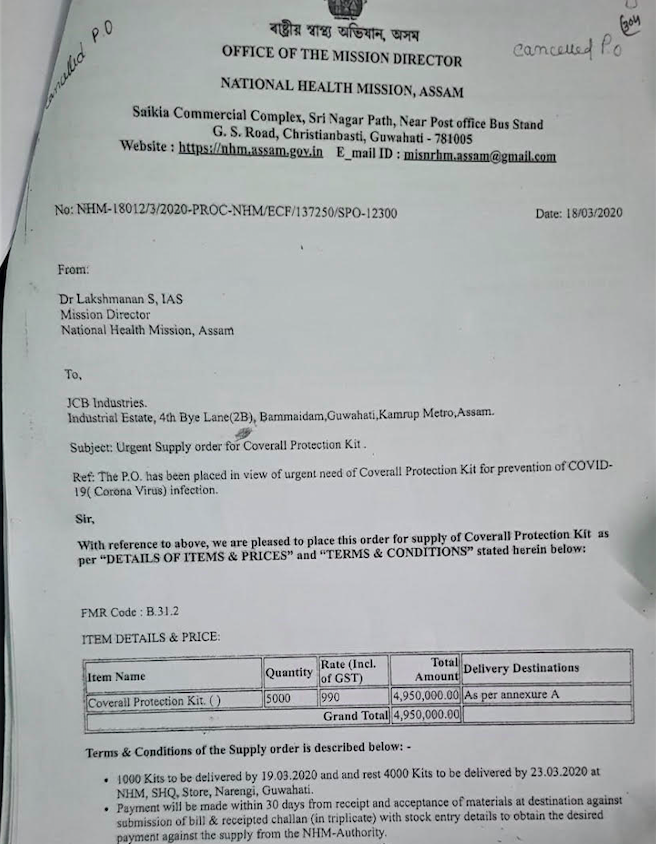 The total amount fixed for supplying those 5,000 kits to Riniki Bhuyan Sarma’s firm through preferential treatment was Rs 4,950,000 (49 lakh 50 thousand).

In the statement issued in response to The Wire and The Cross Current’s report, the chief minister’s wife said her firm didn’t “take a penny” for those 1,485 PPE kits but remained silent on wresting an ‘urgent’ supply order for the same kits prior to declaring them as her ‘CSR’ activity.

Crucially, Riniki Bhuyan Sarma not only officially expressed her firm’s intent to supply PPE kits while her husband was the minister in the department but also got preferential treatment without going through the due process of tender or quotation.

As per the government of India’s Code of Conduct for ministers (both Union and state), all state and Union ministers are to “ensure that the members of his family do not start, or participate in, business concerns, engaged in supplying goods or services to that Government (excepting in the usual course of trade or business and at standard and market rates ) or dependent primarily on grant of licenses, permits, quotas, leases, etc. from that Government; and report the matter to the Prime Minister, or the chief minister as the case  may be, if any member of his family, sets up, or joins the conduct and management of any other business.” 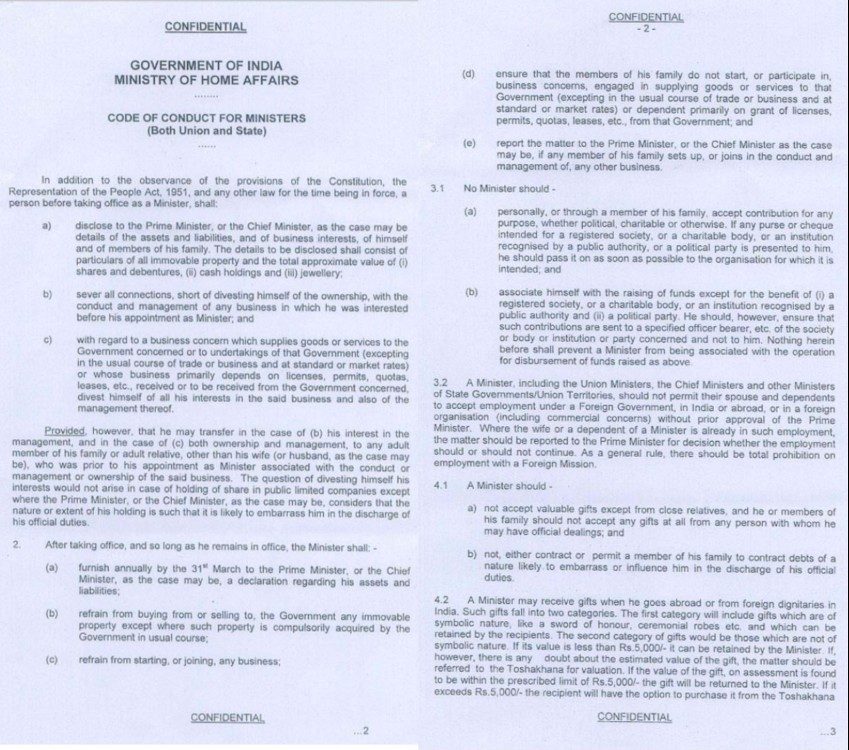 The Government of India’s Code of Conduct for ministers, both in states and at the Union.

The Code of Conduct for all ministers – at the Union and all state governments – was approved by the Union cabinet at its meeting on January 24, 1992 in the Narasimha Rao era.

The 28-page Code of Conduct for Ministers, marked ‘confidential’, were shared by the Central Public Information Officer in November 2009 with New Delhi-based RTI activist Venkatesh Nayak.