The top court was hearing a batch of petitions challenging the Karnataka high court's decision to uphold a ban on hijab. 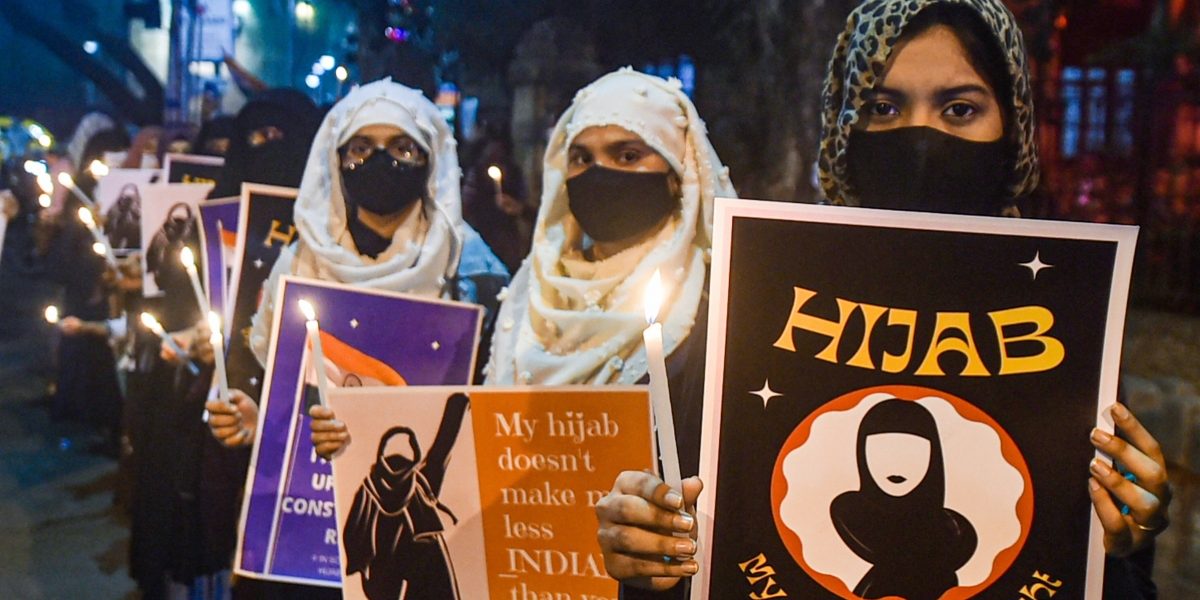 New Delhi: A person has a right to practise religion but the question is whether it can be taken to a school which has a prescribed uniform, the Supreme Court observed on Monday while hearing a batch of petitions challenging the Karnataka high court’s decision to uphold a ban on hijab.

Hearing arguments, the apex court asked whether a student can wear hijab to a school where uniform has been prescribed.

“You may have a religious right to practise whatever you want to practise. But can you practise and take that right to a school which has uniform as a part of dress you have to wear? That will be the question,” said a bench of Justices Hemant Gupta and Sudhanshu Dhulia.

The apex court posed the question to senior advocate Sanjay Hegde, who was arguing for some of the petitioners.

On the argument that the hijab ban may deny education to women, the bench noted the state is not saying it is denying any right. “What the state is saying is that you come in a uniform which is prescribed for the students,” it said.

Hegde underlined what the apex court will hold in this case would have a bearing on the education of a large section of society. He also referred to the provisions of the Karnataka Education Act, 1983.

Additional solicitor general (ASG) K.M. Nataraj said the issue is very limited and it pertains to discipline in educational institutions.

When the court asked him how discipline in a school is violated if a girl child wears hijab, the ASG said, “Somebody in the guise of his religious practice or religious right cannot say that I am entitled to do this therefore I want to violate the discipline of the school”.

Advocate general of Karnataka Prabhuling Navadgi referred to the state government’s order of February 5, 2022 by which it had banned wearing clothes that disturb equality, integrity, and public order in schools and colleges which some Muslim girls had challenged in the high court.

Navadgi argued it was not the state but educational institutions concerned that prescribed uniforms.

“This government order does not interdict any of the rights of the students,” he said during the arguments which will continue on September 7.

Senior advocate Rajeev Dhavan, who also appeared in the matter, referred to Article 145 (3) of the constitution and said it is a matter of considerable importance. The article relates to the minimum number of judges required to decide any substantial question of law as to the interpretation of the constitution.

On whether wearing hijab is an essential practice under Article 25 of the constitution, the bench said, “The issue can be modulated little bit in a different way. It may be essential, it may not be essential.”

“What we are saying is whether in a government institution you can insist on carrying your religious practice. Because the Preamble says ours is a secular country,” the bench observed.

According to LiveLaw, Dhavan argued that even in the Supreme Court, there are judges who wear tilak and pagdis. However, Justice Gupta said pagdi is a non-religious item and was worn in royal states. He said: “My grandfather used to wear it while practicing law. Don’t equate it with religion…”

Dhavan said the issue raised before the court concerns millions of women, who comply with the dress code in educational institutions but also want to wear hijab.

“What this court will rule, the whole world will listen,” he said, adding the apex court’s decision in the matter will be of momentous importance.

During the arguments, the bench observed that if the Karnataka Education Act does not permit prescribing dress code, then the question would be whether the Act prohibits dress code.

“Can the students come in minis, midis, whatever they want?” the bench asked.

Hegde said the executive power of the state cannot be in violation of fundamental rights.

The apex court had last week issued notice to the Karnataka government on these pleas.

Solicitor general Tushar Mehta, appearing for Karnataka, had said a question of law was involved in the matter and no counter may be required to be filed.

Several petitions have been filed in the apex court against the March 15 verdict of the Karnataka HC holding that wearing of hijab is not a part of the essential religious practice which can be protected under Article 25 of the constitution.

The high court had dismissed the petitions filed by a section of Muslim students from the Government Pre-University Girls College in Udupi, seeking permission to wear hijab inside the classroom.

The prescription of school uniforms is only a reasonable restriction, constitutionally permissible which the students cannot object to, the high court had said.

In one of the pleas filed in the top court, the petitioner said the high court has erred in creating a dichotomy of freedom of religion and freedom of conscience wherein the court has inferred that those who follow a religion cannot have the right to conscience.

Challenging the February 5 order of the government, the petitioners had argued before the high court that wearing the Islamic headscarf was an innocent practice of faith and an Essential Religious Practice (ERP) and not a display of religious jingoism.