Here's Why India Is Struggling to Be Truly Open Defecation Free

Why is it that even with an increase in households with improved sanitation conditions, India is not meeting its ODF expectations? In a country as diverse as India, a one dimensional solution is not going to solve an issue that is highly driven by social norms. Photo: Eric Parker/Flickr (CC BY-NC 2.0)

India built over 9.5 crore toilets across the country and was declared Open Defecation Free (ODF) in October, 2019. Three years later, a walk in the village, Bargadia in Uttar Pradesh shows a different reality.

“We have been defecating in the open for many years, it has become more of a habit now. Toilets constructed in households are mostly left unused. We tried using it but the sludge flows through drains, which are located right in front of our house. It is a 10-15 minute walk to the jungle where we find it is safe to openly defecate”, says Vandana Kumari, a resident of the village.

To understand this gap between toilet coverage and usage in India, data from the fifth National Family Health Survey is presented here. It provides information on the health and nutrition indicators of 17 states and five Union Territories in India.

Figure 1 analyses progress for states over the years by comparing data from NFHS 4 (2015-2016) and NFHS 5 (2019-2020). It shows the change in percentage of population living in households with improved sanitation. Except Sikkim, which shows a 2.4% decline, an increase in this percentage can be seen across all other states.

In average across India, improved sanitation increased by 18 percentage points. 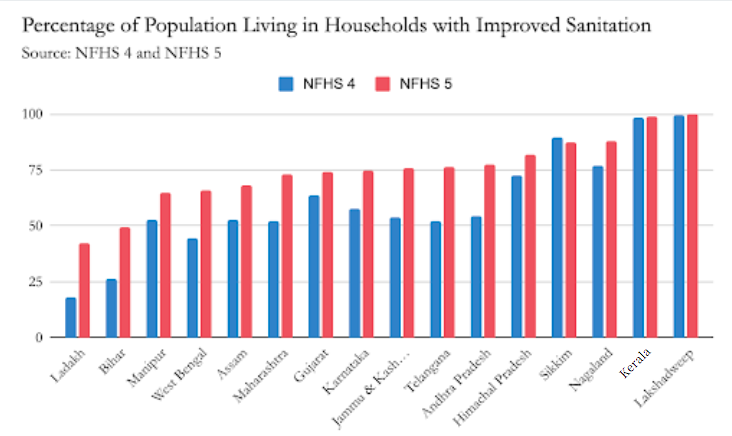 However, data from NFHS 5 shows a disconnect between the percentage of people living with sanitation facilities and the ODF status of these 22 states and Union Territories. Ladakh and Bihar are more than 50 percentage points lower than their 100% ODF status. This is followed by Manipur (35.1), West Bengal (32), Assam (31.4) and so on, as observed in Figure 2.

Lakshadweep and Kerala are the only two states which are less than 2 percentage points close to achieving the target of 100% ODF. 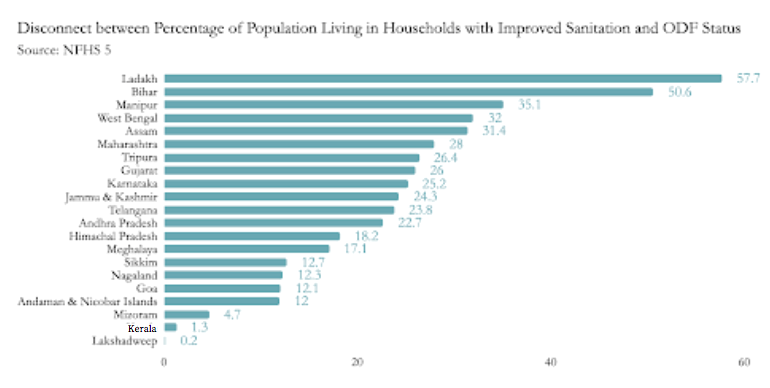 So, why is it that with an increase in households with improved sanitation conditions, India is not meeting its ODF expectations?

What explains this gap?

For many, it is preference rather than compulsion. Many do not want to live close to human waste and think that it makes their homes impure – an idea which is inconsistent with their regular notions of cleanliness and purity. Affordable latrines require cleaning to take place manually, so households want to connect their toilets to a large tank. This helps avoid the task of emptying and cleaning the tank – a task that ‘upper’ castes perceive is meant for Dalits.

Beliefs in ritual purity and untouchability have not just prevented rural India to access toilets but has also led to lack of proper maintenance of these facilities. Thus, rather than just financial constraints, issues of casteism act as barriers towards making India open defecation free.

Many scholars have analysed open defecation practices according to the Hindu caste system – a ritual avoidance of excreta. A study conducted by Dean Spears and Michael Geruso suggested that Hindus are far less likely to use toilets than Muslims in India. The difference in demand by Hindus and Muslims was seen across all levels of wealth. These findings were significant at the 5% level. Furthermore, Hindus were more likely to respond that defecating far away from home is considered pure. This also explains the Muslim mortality paradox, according to which, more Hindu children than Muslims are unable to make it to their fifth birthday. This is despite Muslims being a disadvantaged minority in India.

Another factor that explains the gap in the ODF status is the method in which different types of toilets function in rural India.

The United Nations Children’s Fund has recognised three types of toilets – single pit, twin pit and septic tank toilets. The septic tank toilets have drains that connect the toilet to the tank located nearby. The sludge flows through the drain pipes and then gets accumulated in the tanks. The usage of these septic tanks has been considered to be highly problematic as the sludge flows through drains that are mostly located near their houses. Thus, the risk of getting exposed to fecal germs and bacteria is even higher than the risk one faces by defecating openly.

The government has, meanwhile, also introduced ODF+ and ODF++, strengthening the overall ODF mandate of the Swachh Bharat Mission (SBM). The conditions for ODF+ is that an area, city, ward or work circle should be open defecation free as well as ensure that the public and community toilets are functional and well-maintained. Moving a step further, conditions to receive the ODF++ status call for efficient maintenance of the toilet facilities along with safe treatment and management of fecal sludge and sewage. Under this, no discharge of untreated fecal septage in open areas, drains and water bodies needs to be ensured.

With the current state of things, it is challenging to impose these conditions which is why only seven cities in India have received the status of being ODF++. 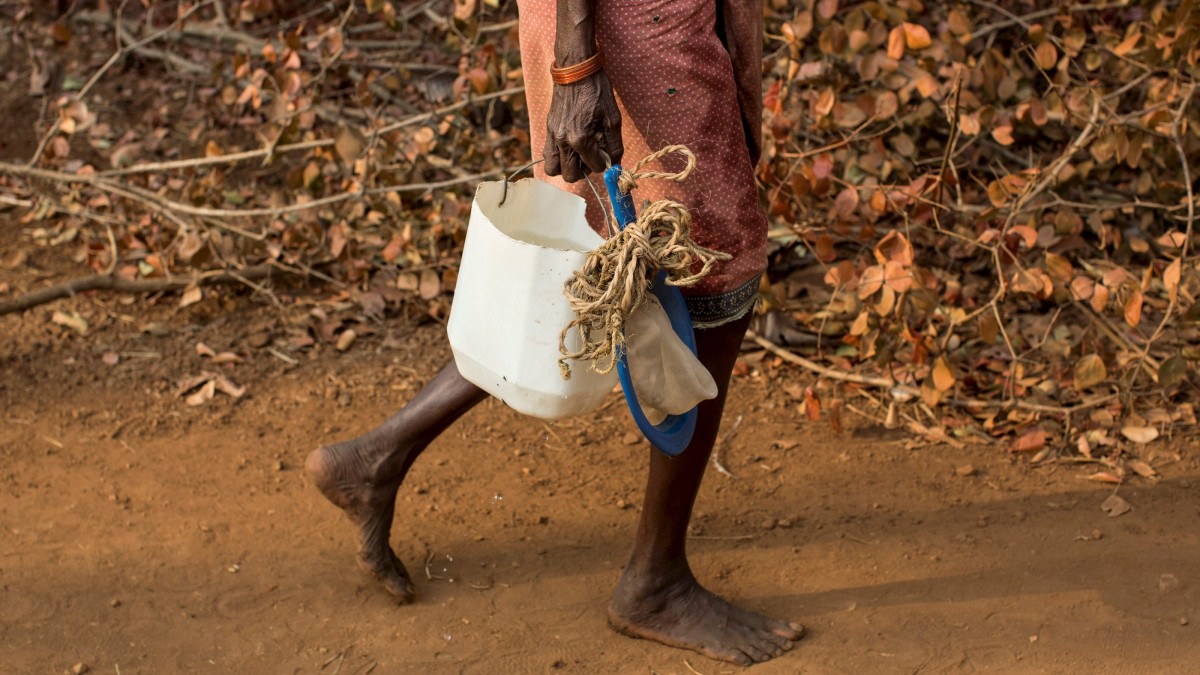 Many areas struggle to keep the ODF status intact once achieved, owing to seasonal and technological obstructions. Households struggle to maintain toilets in areas susceptible to seasonal floods as these facilities get flooded or sometimes even overflow.

The challenge of maintaining the ODF status is also seen in villages which are drought prone. Here, households receive a limited amount of water, which they choose to prioritise for other activities such as drinking and washing as opposed to using in toilets. Thus, seasonal challenges create hurdles for states to maintain the status of being open defecation free.

Child height is considered to have a strong connection to lifelong implications for health and human capital. Out of the 149 million children who are stunted worldwide, India has one third of them. Data from NFHS 5 shows that this number has further increased over the last four years. One out of every 5 children in the country has stunted growth.

Open defecation explains the enigma of child height in the country. Indian children are shorter on average than children in Sub Saharan Africa, despite Indians being richer on average.

It is interesting to note that gaps in height-for-age are not captured by differences in the incomes of the countries alone and open defecation provides an answer to this paradox. In a study conducted by Dean Spears, much or all of the average height-for-age difference in Sub Saharan Africa and India can be statistically attributed to open defecation.

Then why is it that child stunting is seen as a common phenomenon even among those who access toilet facilities? The 2005 Demographic Health Survey (DHS) suggests that even the top 2.5% of the wealthy children are shorter than the ‘healthy growth norms’.

Open defecation has become a classic example of a negative spillover. This is primarily because these children too are exposed to the fecal germs that come from others practicing open defecation. The problem then becomes worse for India due to its high population density, with 403.4 people per square kilometre.

In a country as diverse as India, a one dimensional solution is not going to solve an issue that is highly driven by social norms. Open defecation in India is largely a behavioural issue which is exacerbated by structural challenges. Its effects extend to adverse health outcomes, especially in children. Clearly, there is much scope of increasing efficiency under the Swachh Bharat Mission.

There remains an urgent need to weave in cultural parameters into policies that aim to eradicate open defecation. Simply constructing toilets is not enough anymore. The  government needs to stress more on effective communication to induce change as well as focus on the differential usage and access to these facilities.

Only 3% of the SBM budget is allocated to behavioural modification. An increased focus on behavioural change seems to be the key solution to make the objectives of the Swachh Bharat Mission more effective. Furthermore, caste and cultural biases need to be noted as key parameters that perpetuate the practice of open defecation.

Lastly, the casteist bias of requiring large tanks as opposed to pit latrines in rural areas must be taken into consideration while advancing progress of the Swachh Bharat Mission.

Ananya Sharma is a Teaching Fellow at Ashoka University, India. Her key interests lie in health and development economics.