Chandigarh: Both Punjab and Haryana have been peeved ever since the Union government on February 23 amended the rules regarding appointments to two key positions on the Bhakra Beas Management Board (BBMB).

Both the states blamed the Union government for making changes without any prior consultation and feared losing control over the key water management body, which manages the water resources.

BBMB was set up at the time of Punjab’s reorganisation in 1966. Its key function is to regulate the supply of water from Satluj, Ravi and Beas largely to Punjab and Haryana while managing various irrigation as well as power projects on these rivers. Rajasthan and Himachal Pradesh also have some share in resources managed by the BBMB.

As per convention, member (power) and member (irrigation) of the BBMB were appointed from senior engineers serving in the state of Punjab and Haryana respectively, while the chairman of the body was a neutral person from another state.

New rules, according to various stakeholders, have now allowed the appointment of member (power) and member (irrigation) to be from anywhere in the country.

Notified by the Union Ministry of Power on February 23, it states that the posts of the chairman and whole-time members shall be filled on deputation or direct recruitment basis with the approval of the Appointments Committee of Cabinet.

In an official statement, the BBMB claimed that the present composition and structure of the body remained unchanged. It also stated that the recently notified rules only specified the technical qualifications required for the functional members of the body.

“Earlier, neither the Punjab Reorganisation Act, 1966, nor BBMB Rules, 1974, specified the eligibility criteria, necessary qualification or relevant experience for appointment to the post of whole-time members in BBMB. The new rules will help ascertain the suitability of the candidate for appointment of members,” the statement added.

Ajay Pal Singh Atwal, who is the general secretary of the Punjab State Electricity Board (PSEB) Engineers Association told The Wire that the BBMB’s statement hid more than it revealed.

He said that the eligibility criteria under in new rules is such that no one from Punjab or Haryana will be able to qualify.

“For instance, one major requirement in the appointment of member-power is that one must have headed the operation and construction of big hydro-electric power projects. When there are no big hydro projects here, how will any engineer meets the criteria?” asked Ajay Pal.

He said two posts of whole-time members of the BBMB – power and irrigation – have always been filled by eligible candidates from Punjab and Haryana through nominations sent by the respective state government.

This practice, he said, ensured that the biggest stakeholder, Punjab, which has more than 50% share in the BBMB, has a say in the management to protect its interest.

He said new rules are tailor-made and would adversely affect the interests of both Punjab and Haryana.

Jasvir Dhiman, president of the PSEB Engineers Association, told The Wire that the Union government does not bear any expenditure of the BBMB. The expenditure is met by the member states. “It is sad that there was no prior consultation with either Punjab or Haryana before the latest amendment to BBMB rules,” he said. He demanded an immediate withdrawal of the notification.

‘Another attack on federalism’

Not long ago, the Union government had increased the jurisdiction of the Border Security Force (BSF) without any consultation with the Punjab government. Political parties in Punjab are comparing the latest move with that, calling it another attack on federalism by the BJP-led Union government.

Shiromani Akali Dal (SAD) president Sukhbir Singh Badal in a tweet stated that the BBMB issue points to a much larger “crisis” of how successive Union governments have treated Punjab and Punjabis. “The Akali Dal has no option but to blow the bugle for an intensive fight for federalism and save our future generations from starvation (sic),” Sukhbir wrote

In a statement issued, Aam Aadmi Party state president Bhagwant Mann said that the Narendra Modi government has “left the Congress behind” in “robbing the rights of the states”.

“It is also a direct blow to India’s federal system,” said Mann while urging Modi to review all “anti-Punjab decisions”, including the BBMB amendments, to restore the rights of Punjab.

Mann said the Union government should “refrain from taking arbitrary decisions” in the BBMB Rules and “abandon the already mundane and step motherly attitude towards Punjab and stop the loot”.

The AAP leader also blamed the Congress and SAD-BJP state governments in Punjab as “equally responsible”, accusing the leaders of these parties of not looking beyond their “selfish agendas”.

Mann said that if AAP forms the government after the assembly election results are announced on March 10, “all the issues related to the rights of Punjab would be taken up seriously” with the Union government.

The Congress too maintained that the rules have been changed to drastically reduce the chances of officials from Punjab and Haryana from getting nominated. Sunil Jakhar urged chief minister Charanjit Singh Channi to lead a delegation to meet Prime Minister Modi to oppose the new rules. 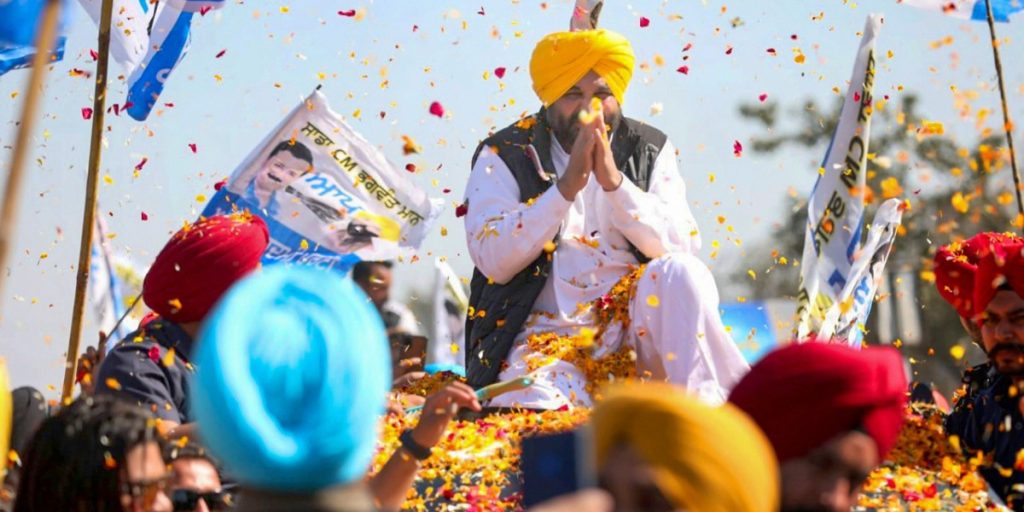 Meanwhile, senior journalist Jagtar Singh told The Wire that this issue was likely to flare up after the March 10 result of the Punjab assembly election if the Union government does not roll back the notification.

It will be the first major challenge for any party in power, even more for the AAP, said Jagtar. He said the BBMB issue has the potential to adversely affect Punjab’s control over its water bodies.

Farmers unions, Haryana too step in

Various farmers groups have also announced that they will hold a protest on March 7 on the issue. The Samyukt Samaj Morcha, a political party launched by some farmer leaders, has said that the BBMB should specify that the position of the member from Punjab will be permanent, else an agitation may be launched against it.

The opposition first began in Punjab before Haryana, which is under the BJP’s rule, too joined the chorus. CM Manohar Lal Khattar told the media on Tuesday, March 1 that the Haryana government will register its protest with the Union government on the amended BBMB rules. He said they would demand a return to the old system. In the last four days, all political parties barring the BJP in Punjab have registered their protest.

Former Haryana CM and current leader of the opposition Bhupinder Singh Hooda too flayed the move and said that it was an “attack” on the rights of Haryana.

The former CM said there has been a reduction in the posts available from the Haryana quota in the BBMB in the past as well, due to the state government’s neglect.

“The Haryana government did not say anything then, and they continue to be silent even after the new decision of the Union government. This silence of the BJP-JJP government is anti-state,” he stated.