The local civic officials said that the demolitions locally were not linked to any of the accused in the communal clashes that took place in the area on April 10. 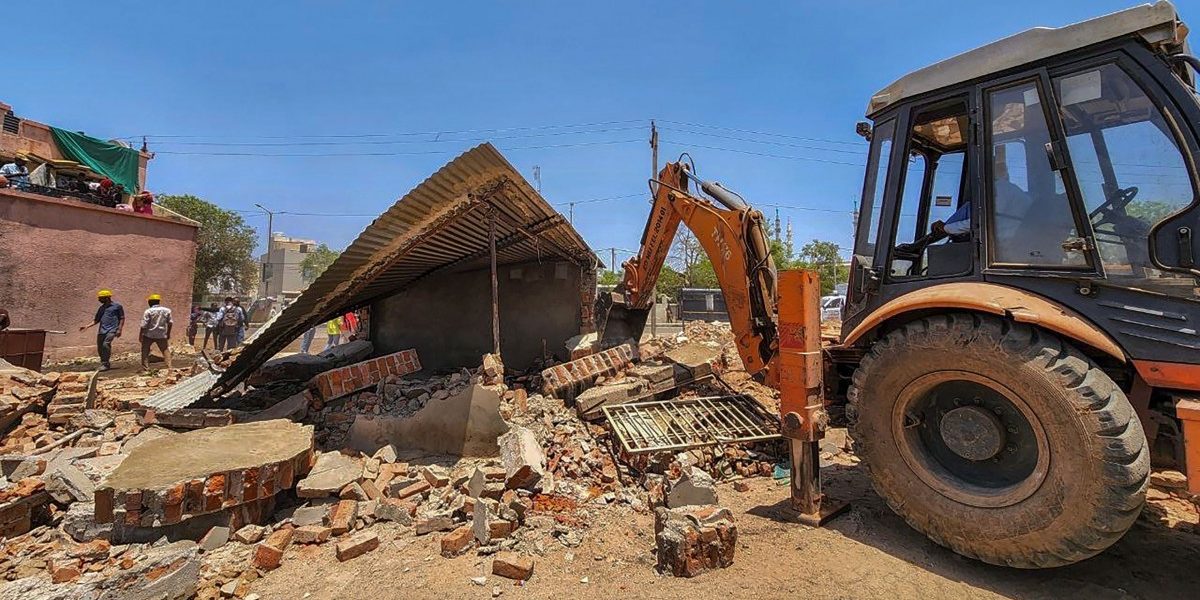 Demolition drive of illegal structures at the site, where communal clash had broken out on Ram Navami procession, in Himmatnagar, Tuesday, April 26, 2022. Photo: PTI

New Delhi: Nearly a fortnight after communal clashes broke out in Gujarat’s Himmatnagar town, the local civic administration on Tuesday, April 26, carried out an “anti-encroachment drive” in the area where riots took place during Ram Navami celebrations, on April 10.

“In today’s anti-encroachment drive, we removed three or four kiosks, two or three shanties and a two-storey shop building on TP Road in Chhaparia,” the Indian Express quoted Navneet Patel, the chief municipal officer of Himmatnagar in Sabarkantha district, as saying.

The demolition in Himmatnagar town on Tuesday was reminiscent of what had been witnessed in Jahangirpuri in Delhi, Anand in Gujarat and Khargone in Madhya Pradesh, where alleged illegal structures were removed days after communal riots broke out locally.

Taking cognisance of the demolitions, the Supreme Court had already issued a stay order on any such demolitions in Delhi, Gujarat and Madhya Pradesh, and scheduled the matter to be heard on May 2.

However, civic officials of Himmatnagar said that the demolitions were not linked to any of the accused in the communal clashes that took place in the area on April 10.

“About three metres of the 15-metre road was encroached on by the building owners who had extended the illegal construction. We had sent notices in 2020. It was a routine anti-encroachment drive and had nothing to do with the incidents that occurred on April 10. We will continue to take similar action in other areas as well,” Patel said.

The local superintendent of police (SP) Vishal Vaghela echoed the same. “On Tuesday, police bandobast was arranged after the civic body informed us of the anti-encroachment drive. It has nothing to do with the riot accused.”

The two-storey building, which was also demolished, belongs to Ashrafnagar Jamaat, a local socio-religious organisation in Himmatnagar. “The building had a cigarette shop, an electricity repair shop and a groceries shop. It is correct that the municipality had sent us notice in 2020 regarding a three-metre extension. On Monday, local officials told us about the drive. Today, we helped them remove the extended portion,” the IE report quoted Kalumiya Shaikh, a member of the jamaat, as saying.

On April 10, a communal clash broke out near the Chhaparia area in Himmatnagar town during a Ram Navami procession, when members from two communities resorted to throwing stones, leaving some people injured. Some vehicles were also set on fire during the clash. Police fired several tear gas shells to disperse the crowd, and arrested 22 persons.

On the following day, April 11, stone-pelting was reported in the Vanzaravas area of Himmatnagar after which police arrested 10 persons from the locality.

Four days later, on April 15, communal clashes took place in Khambhat town of Gujarat’s Anand during a Ram Navami procession, resulting in the death of one person. In its immediate aftermath, the district administration conducted an “anti-encroachment drive” in the Shakarpur area and demolished seven to eight kiosks. The structures allegedly belonged to those involved in communal clashes in Khambat town.

On the other hand, on April 10 in Madhya Pradesh’s Khargone, local authorities demolished at least 20 houses and shops in four localities, a day after communal clashes erupted during a Ram Navami procession in the town.