The suspension bridge was reopened for the public just five days ago after seven months of repair work by a private firm, but had not received the municipality's "fitness certificate", PTI quoted an official as saying. 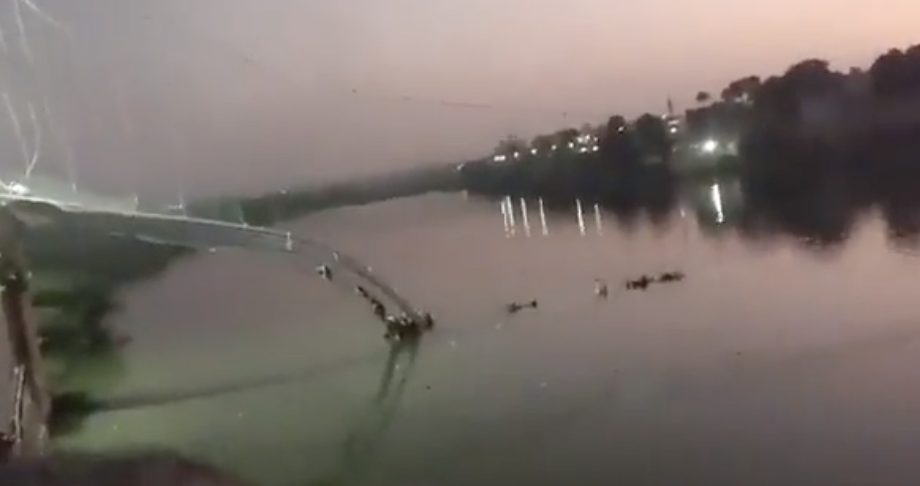 New Delhi: At least 141 people are learned to have fallen into the Machchhu river and died in Gujarat’s Morbi city after a recently renovated suspension bridge collapsed on the evening of Sunday, October 30.

The suspension bridge was reopened for the public just five days ago after seven months of repair work by a private firm, but had not received the municipality’s “fitness certificate”, PTI quoted an official as saying.

“The bridge was given to Oreva company for operation and maintenance for 15 years. In March this year, it was closed for the public for renovation. It reopened after renovation on the Gujarati New Year day celebrated on October 26,” said Chief Officer of Morbi Municipality Sandeepsinh Zala.

“It was opened to the public after the completion of the renovation work. But the local municipality had not yet issued any fitness certificate (after the renovation work),” he said. An “engineering marvel” built at the turn of the 19th century, the suspension bridge was said to reflect “the progressive and scientific nature of the rulers of Morbi,” as per its description on the district collectorate website.

Sanghavi told reporters that the state government has formed a five-member committee to probe the collapse.

An FIR was lodged in the bridge collapse under sections 304 (culpable homicide not amounting to murder), 308 (intentional act causing death) and 114 (abettor present when offence committed), against whoever is found responsible, Sanghavi said.

The bridge, which is almost 100 years old, collapsed as it could not bear the weight of the people standing on it, authorities said.

“Due to the bridge collapse, several people fell into the river. A rescue operation is underway. There are reports that several people have suffered injuries. They are being rushed to hospitals,” local MLA and state minister Brijesh Merja said.

After the collapse, all that remained of the bridge was part of the metal carriageway hanging down from one end into the dark water, its thick cables snapped in places.

Some clambered up the broken structure to try to make their way to the river banks, while others swam to safety. A number of children were among the victims.

Prateek Vasava, who swam to the river bank after falling from the bridge, told 24 Hours Gujarati-language news channel that he witnessed several children drop into the river.

“I wanted to pull some of them along with me but they had drowned or got swept away,” he said.

The bridge had collapsed in just a few seconds, he said.

The 230-metre bridge was built during British rule in the 19th century.

The Prime Minister’s Office announced an ex-gratia of Rs 2 lakh for the next of kin of those who have died. Those injured will be given Rs 50,000.

Chief Minister Bhupendra Patel has announced a compensation of Rs 4 lakh to the kin of the deceased and Rs 50,000 for the injured.

Fifty navy and 30 air force personnel were called in to help along with a national disaster management team to trace missing people, the government said in a statement. A five-member team was appointed to conduct an investigation into the disaster.

Opposition party leaders alleged that the government had not conducted a thorough technical assessment and load bearing capacity before it was opened to the public.

The incident also comes ahead of elections in Gujarat, which are expected to be held by the year-end with the current term of the Modi’s ruling party’s term ending in February, 2023.