Politicians and civil society members alike have criticised the Modi government for "memory erasure tactics" and having "no respect for tradition". 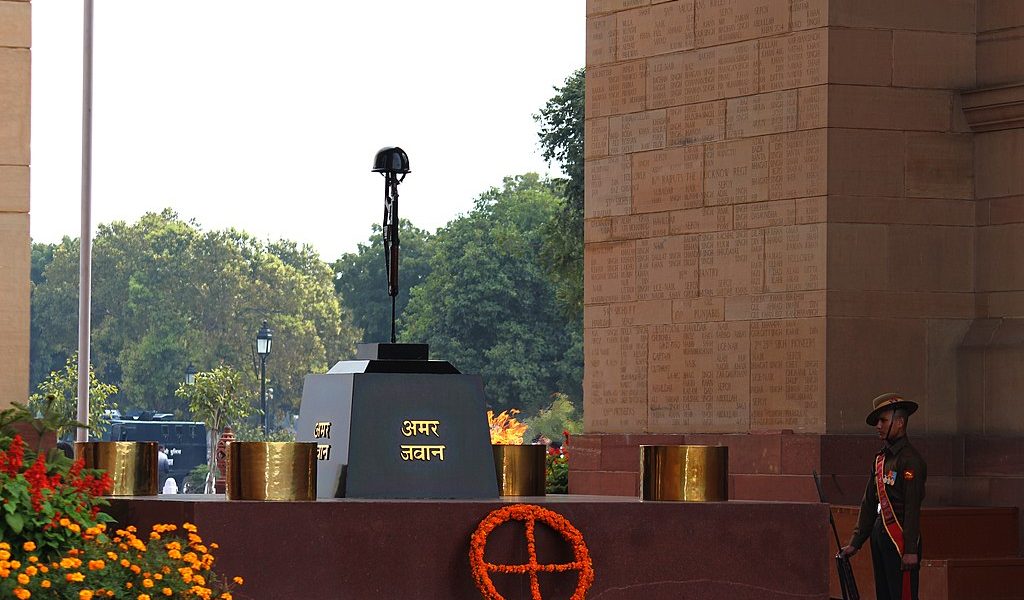 New Delhi: On Thursday, January 20, military officials confirmed that the flame of the Amar Jawan Jyoti at India Gate will be extinguished on Friday after having burned steadily for 50 years and will be “merged” with the flame at the National War Memorial some 400 metres away.

The flame of the Amar Jawan Jyoti was inaugurated at Indian Gate in 1972 by then Prime Minister Indira Gandhi to pay tribute to the soldiers who had lost their lives in the 1971 war with Pakistan. In the 50 years since, the flame has never been extinguished.

Apart from the flame, the Amar Jawan Jyoti also consists of a marble pedestal on which a cenotaph sits to honour the fallen soldiers along with a rifle and a helmet.

At a ceremony to be held on Friday afternoon, a part of the flame will be taken over to the National War Memorial and merged with the flame there after which the flame at the Amar Jawan Jyoti will be extinguished. The ceremony is set to take place at 3:30 pm and will be presided over by Integrated Defence Staff chief, Air Marshal Balabadhra Radha Krishna, NDTV reported.

The National War Memorial was inaugurated by Prime Minister Narendra Modi on February 25, 2019 and ever since it was set up, political and military leaders of the country lay wreaths in remembrance at the new site rather than at the Amar Jawan Jyoti. The official rationale offered for the present decision is that the maintenance of two separate flames is difficult and merging the flames would make upkeep easier.

The announcement led to public outrage and criticism from leaders of several opposition parties. Leaders and spokespersons of the ruling BJP attempted to get ahead of the situation by issuing “clarifications”.

BJP national spokesperson and chairman of the India Tourism Development Corporation (ITDC) Sambit Patra took to Twitter to address the “misinformation” surrounding the government’s decision. In a series of tweets, Patra noted that it was an “odd thing” that none of the names of the martyred soldiers are present at the Amar Jawan Jyoti and that, since the names of all fallen soldiers from the 1971 war as well as other wars that India has fought are present at the war memorial, it would be true “shraddhanjali” to have the flame there instead.

It is ironic that people who did not make a National War Memorial for 7 decades are now making a hue and cry when a permanent and fitting tribute is being made to our martyrs. 4/4

Taking a shot at previous governments, Patra called it “ironic” that “the people who did not make a national war memorial for seven decades” are now objecting to a “permanent and fitting tribute” to the nation’s martyred soldiers.

Another national spokesperson of the ruling party Sanju Verma posted a clarification that was almost identical to Patra’s first tweet:

Here is the truth👇

Flame of Amar Jawan Jyoti is not being extinguished;It is only being merged with flame at National War Memorial,NWM

India Gate is a memorial to fallen heroes of First World War pic.twitter.com/QJmZIERGtW

These efforts, however, did not stop criticism flying in from many corners. Several opposition leaders posted their disapproval of the government’s decision on Twitter.

Congress leader Rahul Gandhi called the extinguishing of the flame “a matter of great sadness”.

Hitting out at the government, Gandhi’s tweet also said, “Some people cannot understand patriotism and sacrifice…” and that the Congress would re-light the flame.

Congress leader and Lok Sabha MP from Thiruvananthapuram Shashi Tharoor criticised the government for having “no respect for democratic tradition and established convention”, asking “So everything must be re-invented post-2014?”

This government has no respect for democratic tradition & established convention, whether in parliament or out of it. The sanctity acquired after fifty years of the Amar Jawan Jyoti is being lightly snuffed out:https://t.co/d918XjfntF So everything must be reinvented post-2014?!

Leader of the Opposition in the Rajya Sabha and general-secretary of the All India Congress Committee (AICC) Mallikarjun Kharge hit out at the ideological underpinnings of the Rashtriya Swayamsevak Sangh, tweeting an extract from Golwalkar’s Bunch of Thoughts and claiming that the Hindu group “…doesn’t consider martyrdom as ideal but a fatal flaw.”

The RSS in principle doesn’t consider martyrdom as ideal but a fatal flaw. Here, excerpts from Golwalkar’s “Bunch of Thoughts”, which has now been taken down from their website.

This explains why the Modi Govt is extinguishing Amar Jawan Jyoti today, after half a century. pic.twitter.com/FvY34NZSwy

The theme of the government attempting to erase India’s past was seen across the criticism levied by many other politicians as well.

Shiv Sena MP in the Rajya Sabha Priyanka Chaturvedi asked on Twitter, “How many more ideas and monuments we hold dear need to be reworked to make way for a ‘New India’?” while RJD MP Manoj Kumar Jha called out the government for its “memory erasure tactics”.

Eternal Flame will be Extinguished Flame for sometime. How many more ideas & monuments we hold dear need to be reworked to make way for a ‘New India’?

PS : Spare me gyaan on merging it with another flame at War Memorial. Why can’t we keep both?

It is understandable that the present regime may not have a sense of attachment/belonging with the ‘glories of the past’ but it is beyond comprehension when you resort to such ‘memory erasure’ tactics..It is neither good politics nor good optics. Jai Hind #AmarJawanJyoti

The opposition to the government’s move was not limited to rival politicians and political opponents, with several members of the public also voicing their discontent on Twitter.

At the same time, however, individuals in support of the government defended the move as well, furthering the official narrative by saying that the flame was not being extinguished but simply moved and accusing those opposing the move of spreading propaganda.

Let us see some basic facts through this thread 1/n