No Country for the Underprivileged: Govt’s Infrastructure Push Has Urban Poor Fighting for Homes

A recent report shows that forced evictions in Indian cities have led to massive homelessness in 2017 even as the government’s record of resettling the poor and providing affordable housing remains abysmal. 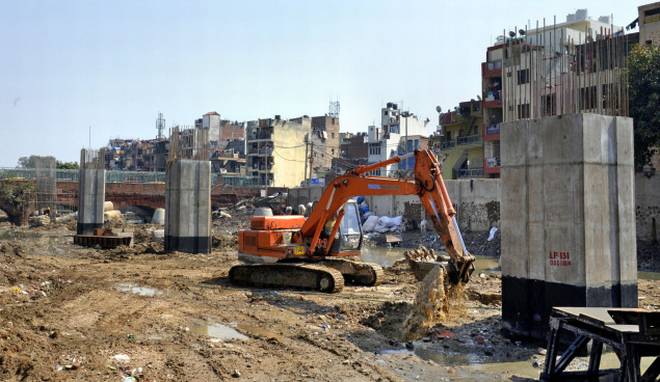 Work on the Barapullah Flyover in progress near the INA Market. Credit: PTIFile Photo

New Delhi: A new study reveals that infrastructure development drives carried out by governments may have had a drastic impact on a large section of urban poor. Forced evictions as a result of city beautification and slum clearance drives, as well as various development projects like the Smart Cities, have led to the displacement of at least 260,000 persons from their homes in 2017, reported the housing and land rights network (HLRN), a non-governmental organisation based in New Delhi.

The study clarifies that the estimate is at best conservative as it has taken only 213 reported cases and the actual number could be much more as demolition drives by government bodies significantly increased last year.

At the same time, the rehabilitation of these people have been far from ideal, says HLRN, which believes that evictions without proper resettlements have precipitated massive homelessness in Indian cities.

“Preliminary findings of a story by HLRN to examine the relationship between forced evictions and long-term homelessness in Delhi (alone) revealed that about 60% of homeless persons interviewed said that there were homeless and living on the streets because their homes had been demolished by the state, without the provision of any resettlement,” the report says.

It adds that most incidents of forced evictions occurred in various cities where infrastructure projects flourished. However, the evictions, the report says, were done in an arbitrary manner and reflected gross violations of human rights and international laws.

“In almost all cases known to HLRN…the authorities responsible for the evictions and demolition of homes did not adhere to due process or human rights standards and laws. In most instances, affected communities were not provided any notice or adequate time to remove their belongings from their homes. The documented eviction and demolition drives not only destroyed housing but also cash savings and personal belongings of the residents, including vital documents, jewellery, and school books and uniforms. Furthermore, in many of the reported cases, authorities did not have a legal basis for the eviction, nor did they provide a justifiable reason to people before forcing them out of their homes and razing them to the ground,” the report documents.

Shivani Chaudhry, executive director of HLRN, said, “Many of these demolitions were done in peak winters or during the early hours of the day without any notice. Prayers of residents were ignored by authorities despite the fact that UN guidelines and several court orders have restrained them to carry out demolition drives during inclement weather.”

HLRN also found that the minimum safeguards of acts like the Urban Land Ceiling Act, the Delhi Development Act, 1957, Slum Areas (Improvement and Clearance) Act, 1956, the Public Premises (Eviction of Unauthorised Occupants) Act, 1971, and the Street Vendors (Protection of Livelihood and Regulation of Street Vending) act, 2014, were not followed.

Multiple international obligations that India is party to, like the International Covenant on Economic, Social, and Cultural Rights, the Convention on the Rights of the Child and so on, were breached by authorities in implementing eviction drives. The use of force during demolition drives is one of the most common ways to deal with the poor, the report says.

What is an ironical situation, the report finds that at least 6,937 homes were destroyed to implement housing schemes for the poor. “In Hyderabad, about 2,800 families lost their homes under the Telangana government’s ‘Two-Bedroom Housing Programme’ that aims to provide permanent housing to the urban poor. The state government, however, forcefully demolished existing homes of affected persons, rendering them homeless without any guarantee of when they will be provided the promised two-bedroom houses,” the report says, while adding that similar demolition drives were carried out in Vadodara, Indore, Delhi under the ‘auspices of the Pradhan Mantri Awas Yojana (PMAY)/Housing for All – 2022 scheme’.

In comparison, the government affordable housing programmes have not taken off well even as the demolition drives continue unabated. “While the government has sanctioned Rs 37.4 lakh affordable houses under PMAY – Urban, as of 1 January, 2018, only a little over 300,000 houses had been built, of which only 267,000 had been occupied. Under PMAY – Gramin (rural) of the 58 lakh houses sanctioned till January, 2018, only a little over 16 lakh have been built,” the document says.

“The government should bear in mind that housing for poor cannot be separated from their livelihoods. Most of the poor are being shifted to the peripheries of the city in the name of rehabilitation and resettlement. While the urban rich and middle classes want the poor to clean their homes, drive their cars, and provide different services, they want the city space to be entirely their own. The nature of forced evictions over the last few years shows that the governments hears only the rich and middle classes while the poor continue to struggle and serve,” said Harsh Mander, eminent human rights activist, while releasing the report.