The former prime minister will continue to get Z plus security protection by one of the Central Armed Police Forces. 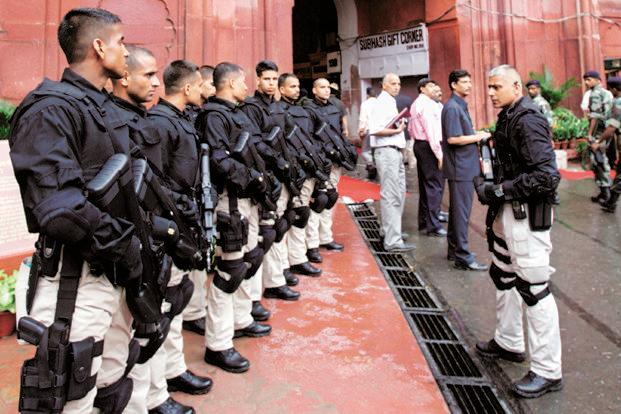 A file photo of SPG commandos at Red Fort during Independence Day celebrations in Delhi. Apart from being physically fit and mentally sharp, SPG recruits need to be younger than 35 years and have an unblemished service record. Photo: Reuters

New Delhi: The Special Protection Group (SPG) protection given to former prime minister Manmohan Singh has been withdrawn following a review by multiple security agencies but he will continue to get Z plus security, officials said on Monday.

The government’s decision had been conveyed to Singh, who was India’s prime minister from 2004 and 2014, and the SPG contingent will be withdrawn from his New Delhi residence after one of the CAPFs takes over the responsibility, a home ministry official said.

“The current security cover review is a periodical and professional exercise based on threat perception that is purely based on professional assessment by security agencies. Dr. Manmohan Singh continues to have Z+ security cover,” a home ministry spokesperson said.

The decision to withdraw the SPG security, the country’s highest grade of protection, was taken after a three-month review involving the Cabinet Secretariat and the Ministry of Home Affairs with inputs from various intelligence agencies, officials said.

With the removal of Singh’s SPG cover, the top notch security cover will now be given only to Prime Minister Narendra Modi and the Gandhi family — Congress president Sonia Gandhi and her children, Rahul and Priyanka.

According to procedures laid down by the SPG Act, 1988, Singh was entitled to SPG cover for one year after he demitted office in 2014.

His SPG security cover was renewed annually after a review of the threats faced by him and his wife Gursharan Kaur.

Singh’s daughters, who were also given SPG cover, gave up the protection voluntarily in 2014.

The SPG was set up in 1985 after the assassination of prime minister Indira Gandhi. Parliament passed the SPG Act in 1988, dedicating the group to protecting the prime minister. At the time, the Act did not include former prime ministers. When V P Singh came to power in 1989, his government withdrew SPG protection given to his predecessor Rajiv Gandhi.

After Rajiv Gandhi’s assassination in 1991, the SPG Act was amended to offer SPG protection to all former prime ministers and their families for at least 10 years.

The Atal Bihari Vajpayee government conducted a review of the SPG’s functioning, and decided to withdraw the SPG protection given to former prime ministers P V Narasimha Rao, H D Deve Gowda and I K Gujral.

In 2003, the Vajpayee government again amended the SPG Act to bring the period of automatic protection down from 10 years to “a period of one year from the date on which the former prime minister ceased to hold office” and beyond one year based on the level of threat as decided by the general government.