While on the surface Jet's future still hangs in the balance with its main shareholder Etihad at loggerheads over the final terms of any deal, behind-the-scenes support from the government means there is likely to be a bailout. 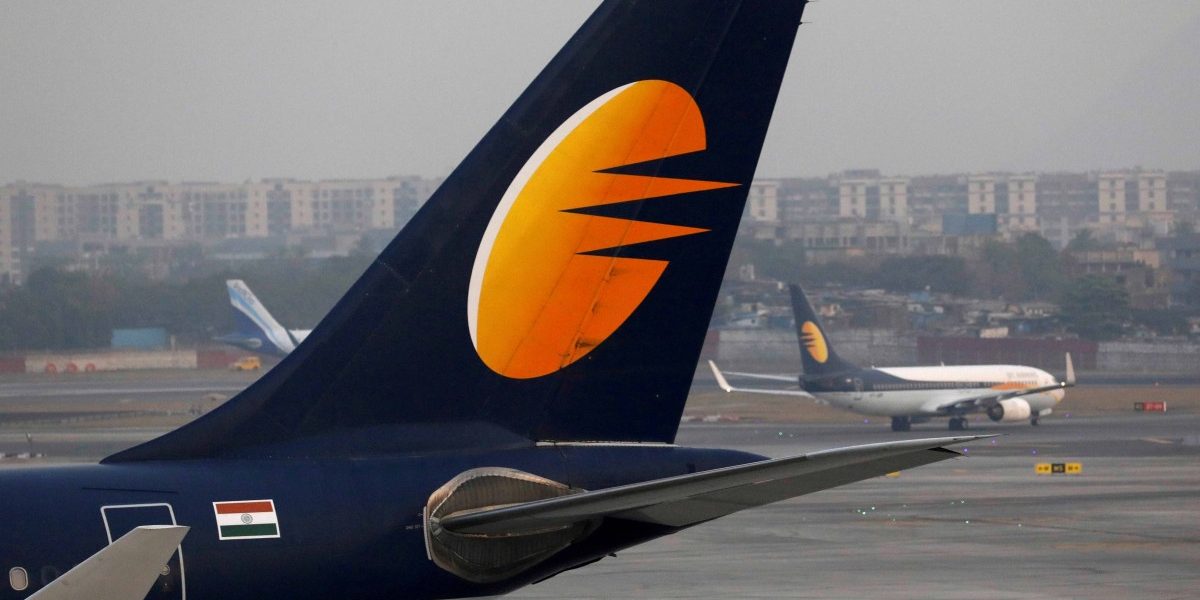 A Jet Airways plane is parked as another moves to the runway at the Chhatrapati Shivaji International airport in Mumbai, February 14, 2018. Credit: Reuters/Danish Siddiqui/File Photo

The finance ministry has in the past year sought regular updates from the banks, led by State Bank of India (SBI), on Jet‘s financial health, the people said. In recent months, the banks have provided weekly updates about a revival plan and also sought government advice, the people added.

“Top officials at the finance ministry seek regular updates on the issue,” said an official at one of Jet‘s lenders, who did not want to be identified as discussions are private.

Details of the discussion between the finance ministry and bankers on bailing out Jet have not been previously reported.

New Delhi has urged state-run banks to convert debt into equity and take a stake in Jet in a rare move in India to use taxpayer money to save a struggling private-sector company from bankruptcy. The two people plus one more source, however, said this would be “transitory” and lenders could sell the stakes once Jet revives.

The government has also nudged its 49%-owned National Investment and Infrastructure Fund (NIIF) – created to invest in stalled and new infrastructure projects – to buy a stake in Jet, a separate government source said.

Saddled with more than one billion dollars of debt, Jet is struggling to stay aloft. It has delayed payments to banks, suppliers, employees and aircraft lessors – some of which have begun terminating lease deals.

The world’s biggest democracy is gearing up for an election next month and its booming aviation sector, which employs close to a million people, has been one of the job-creation success stories that Modi can point to as he seeks a second term.

It is crucial for India that Jet revives as the fall of its second-largest airline could have “disastrous consequences for the investment climate” in the sector, a top government official told Reuters.

Also read: What Needs to be Done to Keep Jet Airways in the Skies?

The official is concerned that if Jet collapses it could drive up airfare in a fast-growing market, wiping out efforts to bring low-cost air travel to India’s hinterland.

A chaotic end could also make it more difficult for the government to sell a stake in Air India, at least in the short run. Last year, it failed to sell part of its stake in the indebted carrier which currently relies on taxpayer money.

If the government’s plan for Jet succeeds, then state-run banks including SBI and Punjab National Bank (PNB) as well as NIIF would together own at least a third of the airline until they find a new buyer.

India’s finance ministry, SBI, PNB and Jet Airways did not respond to requests for comment.

Most companies in Jet‘s financial condition would be placed by creditors into India’s new bankruptcy process, two bankers said. However, memories of the chaos sparked by Kingfisher Airlines’ demise in 2012 have prompted the government to seek a more sober road to rescue, they said.

Putting what is essentially a services provider like Jet through the bankruptcy process would diminish its value because it owns no major assets, unlike a manufacturing company, as most of its planes are leased, said another government official.

If it is pushed into bankruptcy and lessors start pulling even more planes out of service, there would be nothing left for any potential investors, the official said. Already 41 planes have been grounded by lessors in the past three months, leading to flight cancellations.

While on the surface Jet‘s future still hangs in the balance with its main shareholder Etihad at loggerheads over the final terms of any deal, behind-the-scenes support from the government means there is likely to be a bailout.

But there are no easy options, one of the sources said, adding that the lenders do not have the expertise to run an airline so they have to decide what to do once they convert their debt into equity.

New Delhi is also backing a proposal for Jet‘s founder and chairman Naresh Goyal to step down if it means saving the airline, another official said.

“Saving Jet is not equivalent to saving Goyal,” the official said.

Jet, with its fleet of 119 planes, once controlled a sixth of India’s domestic aviation market. The 25-year-old airline is also one of only two full-service carriers that flies to international destinations. The other is Air India.

The government ideally wants four to six major airlines to ensure fares are competitive and passengers have greater choice, according to the top government source.

India plans to build 100 new airports costing about $60 billion which would need a steady stream of flights to sustain them, and that is possible only if there are enough airlines, a separate official said.

“The investment in these airports will solely depend on operators willing to have regular flights at affordable prices and one operator going bankrupt does not help,” he said.