In Tourist Haven Goa, Tourists and ‘Outsiders’ Are No Longer Welcome

Panaji: A British couple holidaying in Goa recently put out a distress message on Facebook, asking for help in getting food and other essentials. “The only shop I saw in Arambol was tiny with a huge queue…didn’t look like they had much left and me and my partner were threatened by a local (not police) so didn’t want to queue after that anyway!” Corina Bethany Rose Cronfield’s post said.

AC Milan goalkeeper Asmir Begovic took to Twitter on Sunday to say that the 67-year-old mother of his close friend and agent was stuck in Goa along with hundreds of other British citizens. “With India in total lockdown, it is becoming hard for them to source food and water,” he wrote.

Some 1,500 foreigners are currently stranded in Goa during the coronavirus-induced lockdown, superintendent of police, foreigner regional registration office (FRRO) Bosco George told The Wire. Those who’ve been cleared for evacuation by their embassies – 250 French and 40 Czech nationals among them – will be escorted to the airport, he said.

With 240 CISF (Central Industrial Security Force) personnel out on the streets of Goa since Sunday liberally using their batons on people (a video of two young men being hit with lathis and forced to hop on their haunches on a street in Panaji has gone viral), they’ll need all the help they can get.

Used to a red carpet welcome wherever they went, tourists and ‘outsiders’ have been at the receiving end of a hostile local population that has gone into self-preservation mode over the coronavirus pandemic. On Divar Island, villagers forced a guest house owner to evict all foreign tourists over fears they were carriers of the virus.

The Goa police have been making rounds of beachside homestays and small resorts, asking owners to corral their foreign guests within the premises because of the lockdown. “How will they eat and get access to food and water?” one such hotelier asked. They hadn’t even considered that detail, the police replied. 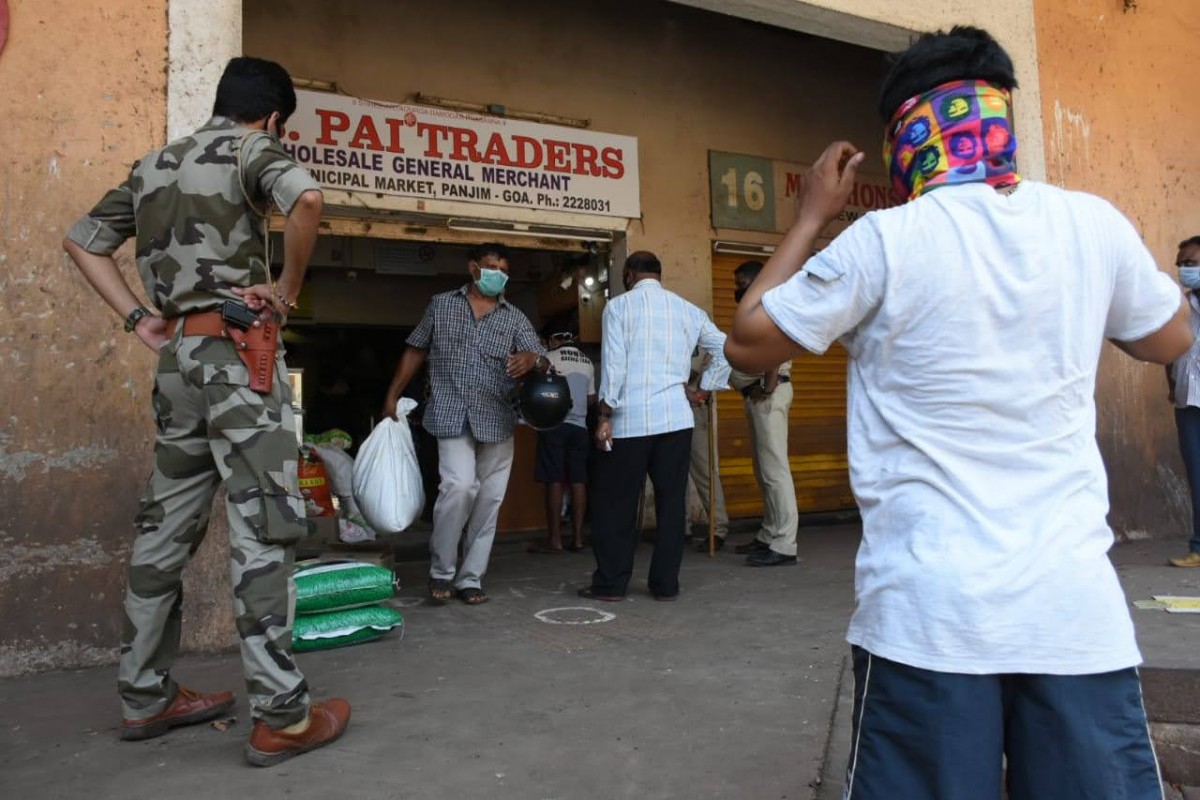 An essentials good shop in Goa. Photo: The Wire

But it isn’t only foreign tourists who are being subjected to an overbearing level of official stupidity and acute parochial xenophobia that has gripped Goa since the coronavirus lockdown. There has been utter panic triggered by the fear mongering set off mostly by BJP bhakts and Goa chief minister Pramod Sawant himself, who continue to favour an all-out clampdown for this state of over 1.5 million residents.

Goa is currently treating five COVID-19 positive cases. While four of them returned from travel abroad, the fifth picked up the infection from his brother.

In several villages, vigilante groups are putting up physical barricades to prevent ‘outsiders’ from going in, and those inside from going out to buy essentials.

In Porvorim, the urban sprawl which houses the government secretariat, housing colonies are shuttering in residents with padlocks on gates, in the belief this will keep the infection at bay. “We had to call the cops to force the president of our society to unlock our gate,” a friend said to me.

“A fear psychosis has set in with people in villages insulating themselves within their panchayats with barricades,” says Goa’s health minister Vishvajit Rane. Trying to reach supplies to family stranded in Sonal village within his constituency, the delivery was stopped at a makeshift wooden barricade manned 24×7 by young vigilantes, Rane discovered.

A senior police official found a similar blockade has been put up by parishioners in his village Siridao too. “Everyone’s gone into self-preservation mode over fears that the infection will spread with outsiders,” he says.

The photograph of the over-enthusiastic Cat Boys of Bastora guarding their village against the entry of non-residents says it all. 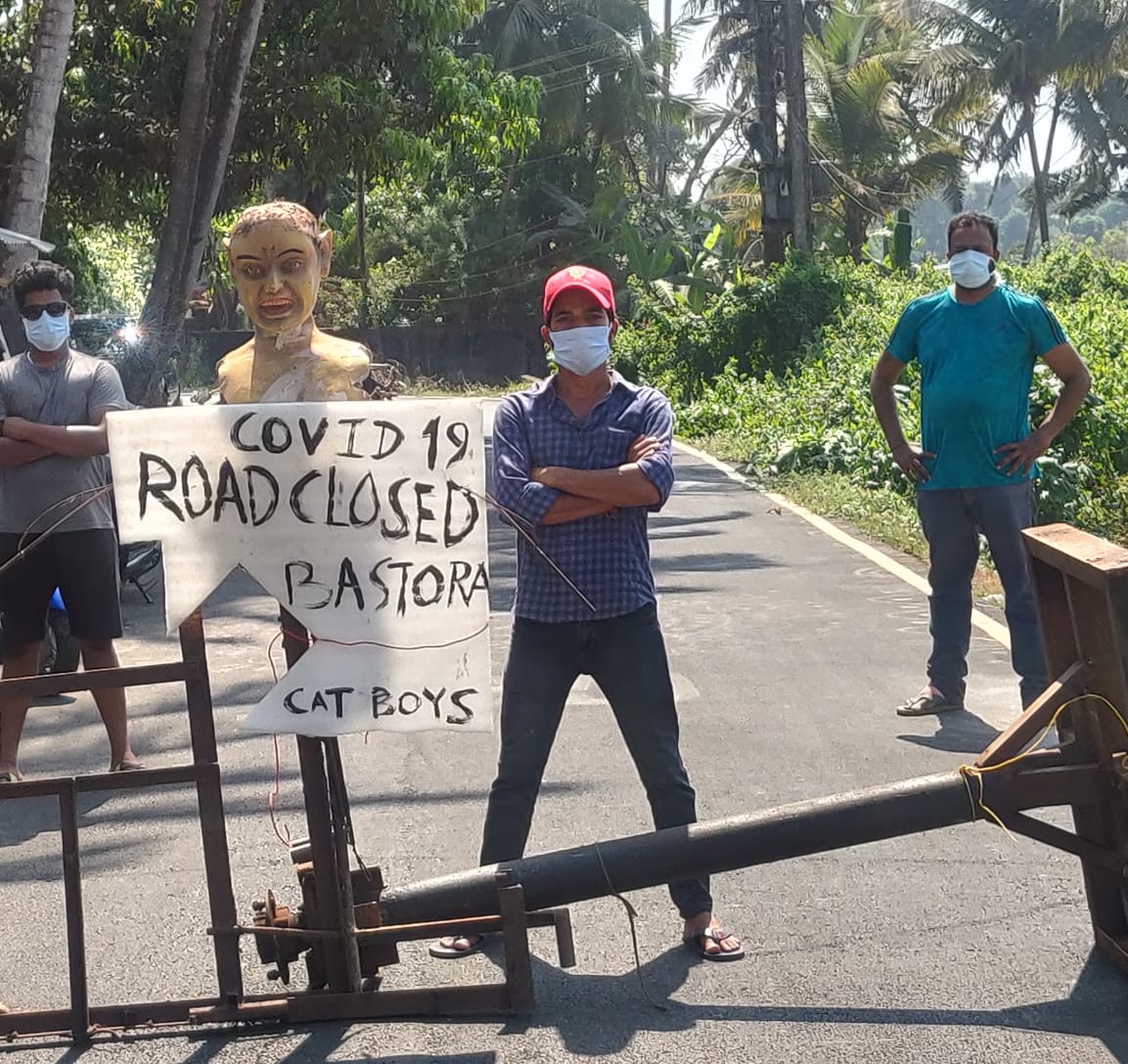 From his drastic total lockdown to his daily scolding of the public and constant flip-flops, Sawant’s dismal handling of the crisis has only made the pain of the shutdown worse for Goans starved of food supplies.

While the rest of the country was allowed access to provision stores, the Goa government barred its citizens from stepping out of homes even for basic supplies like bread, milk and vegetables. Claiming all supplies would be home delivered – a system that sunk before it took off – Sawant shut down the state’s excellent local bread supply, blockaded the borders (most of Goa’s food supplies come from Karnataka) and sat back to tie himself in knots at his daily press briefings. In one he said Goans wanted to rush to the markets to drool over the new mango crop. In another he scolded us for being more concerned with food than the threat of the coronavirus pandemic.

Goa lifted the total clampdown only on Thursday, after some citizens petitioned the high court. But with the supply lines snapped, it could take days for a workable home delivery system to be up and running. On day nine of the shutdown (Goa has been locked down since March 22 without a break) no deliveries except bread and milk have come to the area where we live, compelling the elderly to depend on younger neighbours to venture out to scrounge for supplies from shops wary of the police forcing their shutters down.

“The manner in which the government has handled this is deplorable,” said one resident, Mario Braganza. Yet ministers here continue to send out mixed messages, despite the Central government’s enhanced relaxation on supplies.

“No shop will remain open. After witnessing heavy rush of people at grocery shops during the relaxation period, the government took a decision to shut all the shops and make home deliveries of essential commodities,” civil supplies minister Govind Gaude told local reporters Saturday. He said “people are more bothered about grocery items than a collective fight against COVID-19.” 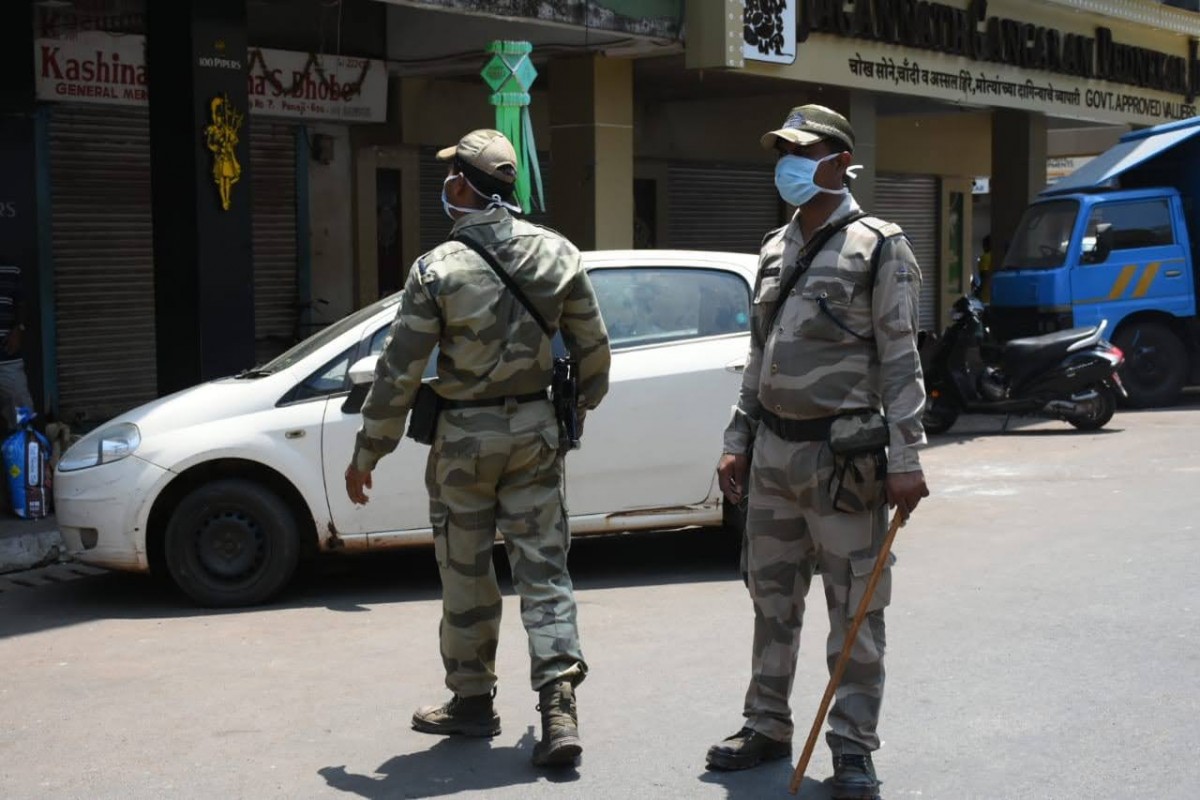 CISF personnel patrol a Panaji street during the lockdown. Photo: The Wire

Fanned by fictitious claims that 50% of doctors at the Goa Medical College (the centre of Goa’s COVID-19 response team) had been quarantined, the hysteria over the infection is doing little to help Goa’s challenge. Threatened with arrest for posting the fake news, Shekahar Salkar, Goa spokesperson of the Indian Medical Association and a long-time BJP member, has since apologised for making the brazen allegation on a video he deliberately sent out to hundreds of people that went viral.

Even as I write this article, I receive another distress message from a friend that says, “There’s a group of foreigners who cannot get access to food/ fruits/vegetables in Palolem and Agonda in Canacona (South Goa). Please guide whom they can contact.”

Though tourism is the mainstay of Goa’s economy, tourists seem to be the last consideration on the beleaguered chief minister’s mind. Goa could be staring at losses exceeding Rs 1,000 crore from the industry’s shutdown, says Travel and Tourism Association of Goa head Savio Messias. Nearly 70,000 have been affected by the closure. For now though, there’s neither a red carpet welcome nor humane treatment for foreigners in this destination.