After emerging as the single largest party in the 2017 assembly elections, winning 17 out of 40 seats, a total of 15 Congress MLAs had defected to the BJP in the years that followed. In this light, the party seeks to reassure their voters that history won't repeat itself. 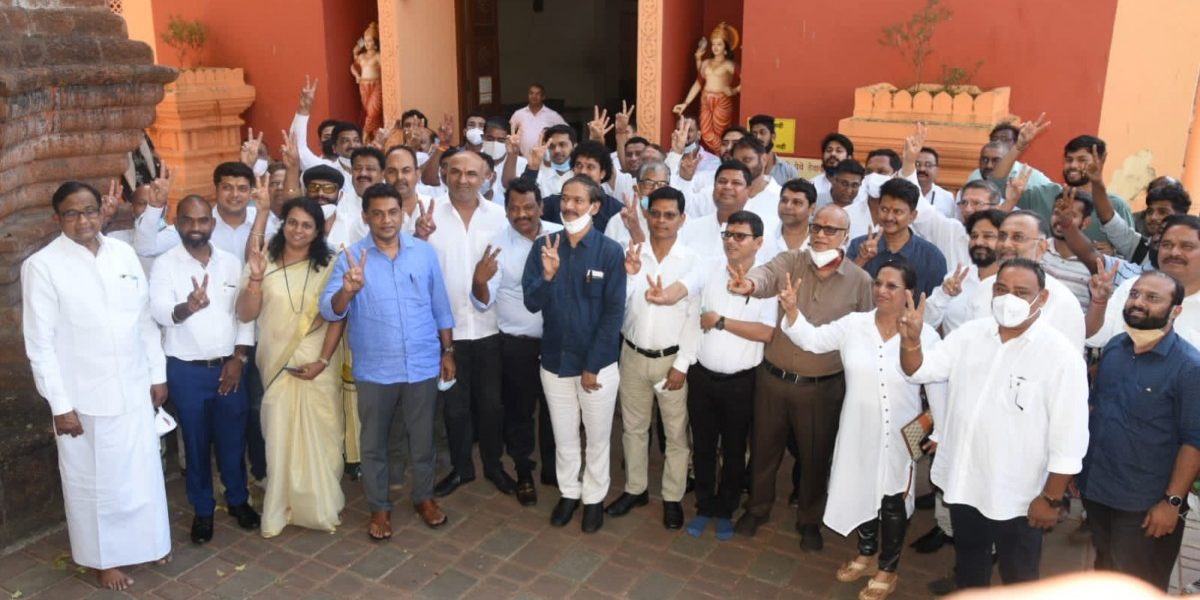 36 Congress candidates, along with senior leaders in the state, take a pledge of loyalty at the Mahalaxmi temple in Panaji. Photo: Twitter/INCGoa.

New Delhi: On Saturday, January 22, 36 Congress candidates for the Goa assembly election pledged their loyalty to the party at three religious institutions; a temple, a church and a mosque, ahead of the February assembly polls in the state, the Indian Express reported.

This pledge serves to assuage doubts in voters’ minds that voting for Congress candidates is tantamount to voting for the BJP, following the mass defection of 10 Congress legislators to the BJP in July, 2019, just ahead of the Monsoon session of the assembly that year.

At the Mahalaxmi temple in the state capital Panaji, the 36 candidates pledged that they would “remain loyal to the Congress party that has given us tickets” and that they would “remain with the party in all circumstances,” the newspaper reported. A similar oath was administered unto them by a priest at the Bambolim Cross church and later, the 34 male candidates repeated their vows at the Hamza Shah Dargah in Betim.

Congress candidates from across Goa visit Mahalaxmi Temple, Bambolim Cross & Hamza Shah Darga and took a pledge of loyalty towards the people of Goa & the party. #PledgeOfLoyalty pic.twitter.com/dtfIFUyuwn

Speaking about the pledges, the newspaper quoted Kamat as saying, “Goans are known for communal harmony,” and that they were “… very serious about this (loyalty to the Congress) and will not allow any party to poach our MLAs.”

“We are God fearing people. We have full faith in the Almighty. Hence, today we have taken a pledge that we will not defect,” Kamat is quoted as saying.

Also read: Ground Report: Goa Wants Change, But Isn’t Sure Who to Vote For

After having emerged from the 2017 assembly polls in Goa as the single largest party, winning 17 of the 40 seats, 15 MLAs had subsequently defected to the BJP, ten of whom did so at the same time, led by then leader of the opposition in the assembly Chandrakant Kavlekar, as mentioned above.

The Congress had already taken steps against defections in July last year when Kamat, the leader of the opposition in the assembly, had said that he would move a private members resolution seeking changes to the anti-defection law as it stood then.

At that time, Chodankar had said that no Congress MLA would defect henceforth, also saying, ““We have changed our selection process. We will field 75-80% young faces in the coming election,” according to the Hindustan Times.

After the pledges on Saturday afternoon, Kamat noted that the sole blame for the defections does not rest with Congress and that the BJP was equally responsible since they actively poached the MLAs.

“BJP gave them offers and hence they switched parties. We want to assure the people of Goa that it will not happen again,” Kamat, who will contest from Margao, said.

In January this year, Michael Lobo, a minister in the BJP state government and the MLA from the Calangute seat as well as Maem MLA Pravin Zantye resigned from the BJP. Lobo subsequently joined the Congress.

After Saturday, Lobo reportedly said, “There are people who say they are Congress voters but have questions in their mind whether the candidates will stay with the Congress after winning? That is why we decided to take this pledge. It is important.”