The union finance minister also noted that the Centre and states would have to work together. 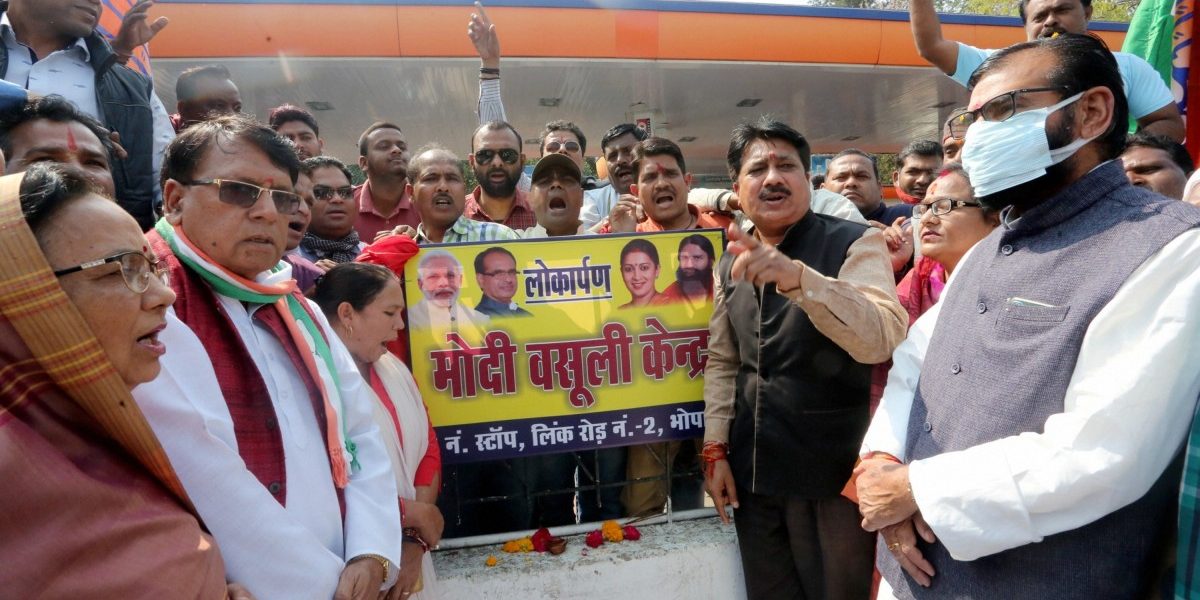 New Delhi: As petrol and diesel prices continue to soar across India, several political leaders have spoke out about the issue over the weekend.

While Union finance minister Nirmala Sitharaman said the Centre and states have to “work together” to bring the retail prices under control, opposition leaders hit out at the Bharatiya Janata Party for failing to bring down the high excise duties levied by the Centre.

As much as 60% of the retail price of petrol, which shot above Rs 100-mark in some places in Rajasthan and Madhya Pradesh and is at an all-time high elsewhere in the country, is made up of Central and state taxes. Taxes make up for about 56% of the record-high diesel rates.

Union oil minister Dharmendra Pradhan, who has been under fire for the surging prices, on Sunday tried to explain why prices had gone so high. There were two reasons for this, he said: “The international market has reduced fuel production and manufacturing countries are producing less fuel to gain more profit. This is making the consumer countries suffer.”

“We have continuously been urging the Organisation of the Petroleum Exporting Countries (OPEC) and OPEC plus countries that it should not happen. We hope there will be a change,” he continued.

Union finance minister Nirmala Sitharaman on Saturday said the Centre and state governments will have to together work out a mechanism to bring retail rates to reasonable levels, and that the issue posed a “dharm sankat (divine predicament)”.

Sitharaman, who had increased central excise duty on petrol and diesel by a record margin last year to mop up gains arising from international oil prices plunging to two-decade low, remained non-committal on cutting taxes to give relief to consumers.

“This is a very vexatious issue. An issue in which no answer except reducing the price (of fuel) will convince anyone. I know I am treading on an area and whatever I may say, to bring in the reality into picture, will only sound like I am obfuscating.”

“I am avoiding my answer. I am shifting the blame,” she said addressing a gathering at an event organised by the Chennai Citizens’ Forum here.

Watch: Petrol and Diesel Price Surge: What’s Behind It and Why

She went on to explain the tax structure and how production cuts by oil cartel OPEC and its allies had led to a rally in the international oil prices, leading to a hike in retail rates in India.

She, however, said the answer may lie in bringing petrol and diesel under the Goods and Services Tax (GST) regime, which will end the cascading impact of taxes and bring uniformity.

Currently, the central government levies a fixed rate of excise duty while states levy different rates of VAT. Under GST, the two would merge and bring uniformity, solving the problem of fuel rates being higher in states with higher VAT.

“What I am saying is that this is a vexatious issue and no minister can ever convince anybody because Indians being Indians and I am one of them, (will not be convinced),” she said. “It is a matter of fact that both Centre and States will have to talk.”

Stating that the states levy ad valorem rates of sales tax or VAT which help them get more revenue whenever prices go up, she said it won’t serve any purpose if the Centre were to take the moral high ground and bring down excise duty to zero. “I can do that (cut taxes) if I have a certain guarantee that my revenue foregone will not be an opportunity for somebody else to get into this space and gain that,” she said.

Accusing the government of “profiteering” off “people’s misery”, Congress chief Sonia Gandhi on Sunday wrote to Prime Minister Narendra Modi over “spiralling” fuel prices, urging him to follow raj dharma and reduce the prices by partially rolling back the excise duty.

In a three-page letter to Modi, she said the government has been “unreasonably overzealous” in levying excessive excise duty on petrol and diesel and asserted that this was “nothing short of extortion” to cover up “economic mismanagement”.

The truth is that as GDP “nosedives”, the prices of gas, diesel and petrol continue to rise unchecked, the Congress chief said.

Gandhi also said governments are elected to ease the burden of people and at the very least, not work directly contrary to their interests.

“I write to you to convey every citizen’s anguish and deep distress regarding the spiralling fuel and gas prices. On one hand, India is witnessing systematic erosion of jobs, wages and household income. The middle class and those at the margins of our society are struggling. These challenges have been compounded by runaway inflation and an unprecedented rise in price of almost all household items and essential commodities,” the Congress chief said.

“Sadly, in these distressing times, the government has chosen to profiteer off people’s misery and suffering,” Gandhi said.

Stressing that fuel prices are at an “historic and unsustainable” high, Gandhi said petrol has breached the Rs 100 per litre mark in many parts of the country and the surging price of diesel has added to the escalating woes of millions of farmers.

“What baffles most citizens, is that these prices have been increased despite moderate prices of international crude oil. To put it in context, the crude oil price is nearly half of what it was during the UPA government’s tenure. Therefore, your government’s act of raising prices (continuously for 12 days till February 20th) is little less than a brazen act of profiteering,” she said.

What is equally distressing is that despite being in power for almost seven years now, the government continues to blame previous regimes for its own economic mismanagement, she said in her letter to Modi. To set the record straight, domestic crude oil production has fallen to an 18-year low in 2020, Gandhi said.

“I fail to understand how any government can justify such thoughtless and insensitive measures directly at the cost of our people. Your government has increased excise duty on diesel by 820% and on Petrol by 258% over and collected upwards of Rs. 21 lakh crore in the last six and a half years,” Gandhi said.

This “unaccounted-for” windfall is yet to be passed to the people for whose benefit it was ostensibly collected, the Congress chief said.

Gandhi said it was cruel on the government’s part to refuse to reduce fuel prices even when global crude oil had crashed to $20 per barrel last year. The whole principle of deregulation and dynamic pricing is predicated on the principle that reductions in crude oil prices will proportionately benefit the end consumers, she asserted.

“The fact that your government fails to do so implies a deliberate and conscious decision to deny the common man his legitimate due,” she said.

Samajwadi Party chief Akhilesh Yadav on Sunday said what did not take place in 70 years, the ruling party has done in one year.

In a statement, Akhilesh said, “In the tenure of the BJP government, prices of petrol and diesel have soared so much that people living in the border areas of Gorakhpur – the home district of Chief Minister Yogi Adityanath – are forced to go to Nepal to get fuel. Why is the BJP igniting the fire of inflation, after taking votes from the people in the name of reducing it?” he asked.

Those who are doing a taandav of destruction in the name of development have thrown the public into the fire of inflation, unemployment and corruption, he said, adding that the public has made up its mind to give a “permanent holiday” to the BJP.

Bahujan Samaj Party chief Mayawati on Sunday expressed concern over increase in the prices of petrol, diesel and cooking gas, and urged the government to take cognisance of it and find a solution.

In a Hindi tweet, Mayawati said, “The prices of essential items like petrol, diesel and cooking gas (LPG) are increasing in an uncontrolled manner after government control over the prices were removed. It has created problems everywhere, and lives of the people are affected. The government should take cognisance of the seriousness of the situation and find a solution.”

Also read: With Petrol Prices up to Rs 100/Litre in Some States, How Much of it Is Tax?

“The increase in additional taxes, especially on petrol and diesel, by the Centre and states is resulting in sky-rocketing prices, and the burden is increasing almost everyday on crores of poor and unemployed people. Has the Constitution ensured such a welfare state principle?” she said in another tweet.

Congress leaders Rahul Gandhi and Priyanka Gandhi Vadra on Saturday took a swipe at the BJP government over rising inflation and the hike in petrol and diesel prices.

“Development of inflation,” he said in a tweet in Hindi, and attached a picture of the problems suffered by common people due to rising prices of petrol and diesel.

AICC general secretary Priyanka Gandhi Vadra said the BJP government should name the day petrol and diesel prices do not rise as “achha din” (good day) as all other days are ‘expensive’.

“The BJP government should rename that day of the week as ‘Good Day’ when diesel and petrol do not increase. Because, due to rising inflation, the rest of the days are ‘expensive days’ for common people,” she said in a tweet in Hindi.

Priyanka’s husband businessman Robert Vadra too joined the chorus, and took out a symbolic protest by riding his cycle to work in central Delhi.

Delhi: Robert Vadra rides bicycle from Khan Market to his office in protest against the rising fuel prices pic.twitter.com/kNtbDrRKQq