While hearing a petition filed by NGO Common Cause, the government told the Supreme Court that the process to appoint a Lokpal has begun and that a crucial meeting will take place on March 1. 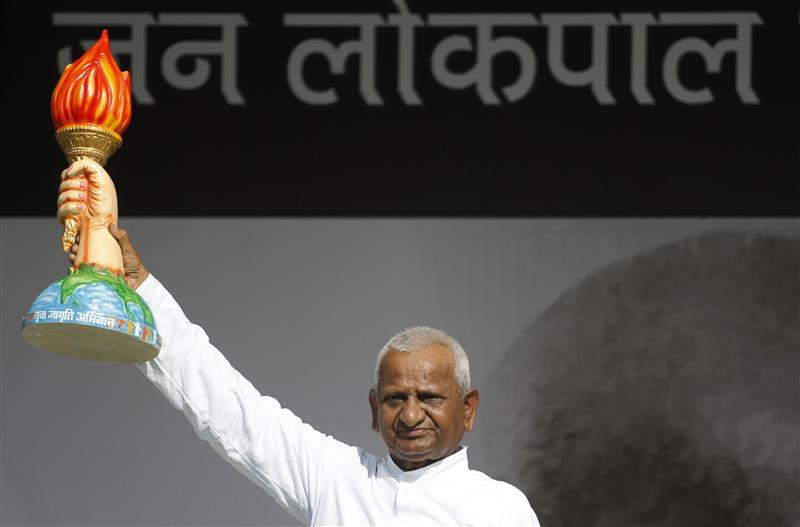 Veteran Indian social activist Anna Hazare displays a mock torch to his supporters on the fourth day of his fasting at Ramlila grounds in New Delhi August 20, 2011. At least 20,000 people gathered on Saturday to support an anti-corruption social activist who has galvanized much of India against the government with his hunger strike, amid signs from Prime Minister Manmohan Singh of compromise to end the impasse. Hazare, a 74-year-old self-styled Gandhian activist lay on a stage on his fourth day of fasting at an open ground in the capital, a hunger strike he says which will continue until the government passes tougher anti-graft legislation. The sign reads 'Jan Lokpal', the anti-graft bill. Photo: Reuters/Parivartan Sharma (INDIA - Tags: CIVIL UNREST POLITICS)

New Delhi: The long wait that India has undergone in anticipation of a Lokpal may soon be coming to an end. The Centre told the Supreme Court on Friday that a meeting has been convened between Prime Minister Narendra Modi, Chief Justice of India Dipak Misra, the Lok Sabha Speaker and leader of the largest party in opposition to discuss the appointment of a Lokpal on March 1.

The court was hearing a public interest litigation (PIL) filed in 2014 by advocate Prashant Bhushan-led NGO Common Cause, which challenged the constitutionality of the search committee rules for the appointment of Lokpal.

After sitting on Lokpal law w/o appointing Lokpal for 4 years & even 10 months after SC ordered govt to appoint Lokpal, govt says it will hold first meeting on 1st March, only after SC contempt threat. As scamsters like NiMo loot & scoot, PM says, he is chowkidar, Why Lokpal?! https://t.co/Ut9K5AuZr0

The bench, while taking into account the submission of Attorney General K.K. Venugopal, posted the matter for hearing on March 6 and asked the secretary of the Department of Personnel and Training (DoPT) to file an affidavit about the “steps taken and proposed”.

The Supreme Court has time and again hauled up the government for the delay in appointing an anti-corruption authority as it has been five years since the Lokpal and Lokayuktas Act was passed in 2013 after a nationwide campaign led by activist Anna Hazare that included Arvind Kejriwal and Prashant Bhushan nearly brought the nation to a standstill.

The government has stalled such an appointment since then as the rules for the selection committee require that the Leader of Opposition be a member.

But since the Modi government came to power in 2014, the Congress was unable to grasp enough seats to take that position. A party needs to win at least 10% of seats in the 545-member Lok Sabha to qualify.

To appoint a Leader of Opposition, the government then said said, would require a change in the law.

“If the Lokpal was such a priority for the BJP when asking for votes during the 2014 elections, then why stand on ceremony and insist on unwritten convention rather than rely on a written Act of parliament in determining who the LOP is? Furthermore, if Modi has zero tolerance towards corruption, then why the three year delay in bringing out this simple one line amendment? If Aadhaar can be hurriedly rushed through parliament, masquerading as a Money Bill or if the Land Acquisition Act can be pushed through an ordinance, then why has the LOP definition in the Lokpal Act not been amended yet?” argued Prashant Bhushan in a piece for The Wire in 2017.