India's overstretched railway network is in urgent need of rehabilitation if it is to keep up with its passenger volume and improve safety standards.

RPT (with added details) - Muzaffarnagar: Coaches of the Puri-Haridwar Utkal Express train after it derailed in Khatauli near Muzaffarnagar on Saturday. Coaches of the train have derailed and at least 15 to 20 people injured as per initial reports. PTI Photo(PTI8_19_2017_000099B) 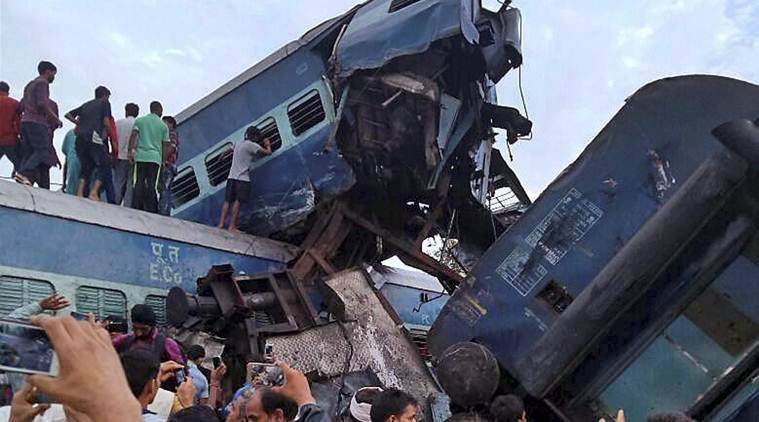 Coaches of the Puri-Haridwar Utkal Express train after it derailed in Khatauli near Muzaffarnagar. Credit: PTI

After three derailments in less than a month, the standard of routine track maintenance on India’s rail network is under the spotlight once again. Of the three derailments, one occurred after heavy rains and landslides washed away the railway track in Thane district in Maharashtra. In this mishap, the Indian Railways itself was a victim of natural disaster.

The derailment of the Kaifiat Express at Auraiya, Uttar Pradesh, happened when a dumper truck trespassed onto the track at midnight and hit the locomotive of a passenger train. Though everyone feels concerned about the 70 passengers who were injured, it must be admitted that the railways too deserve some sympathy for the random behaviour of irresponsible trespassers.

However, the derailment of the Kalinga Utkal Express at Khatauli appears to raise multiple alarms. The fears are about track renewal standards and track maintenance practices followed by the Railways, and the stubborn refusal to accept the need for upgrading track standards despite heavy increase in freight and passenger throughput since the last national-scale track rehabilitation initiated by the Atal Bihari Vajpayee government in 2002-03.

In a statement to the media, a railways spokesperson said that the prima facie cause of the Utkal Express derailment appeared to be a partially finished emergency track. The train crew were not aware of the track repair work, possibly because no traffic block (possession of track to rectify defects or faults noticed on the track) was granted for the repair work on that day. Since there was no speed restriction imposed on the track stretch where defects were being attended to, the train was running at normal permitted speeds and got derailed.

Several questions suddenly arose due to the unusual nature of the cause of the derailment. Doubts were expressed about the abilities of the railways’ track possession management (TPM) when attending to track defects. Is there a disconnect between operational performance achievement targets and track maintenance protocols as well as rolling stock safety and performance standards? Has the engineering member on the railway board abdicated his control over TPM for emergency repairs on track? Or is it being unauthorisedly controlled by some other board member who is not being held accountable? Does the same anarchy percolate down to zonal and divisional levels where railway managers are encouraged to emulate the work culture of the commercially-greedy train operating companies of Britain and adopt a bellicose attitude towards track possession for safety repairs? Are the traffic blocks being routinely refused by the divisional railway managers (DRMs) and general managers (GMs) and forcing track engineers to delay or defer attending track defects?

Also read: What Explains the High Number of Railway Accidents?

A ‘zero tolerance on punctuality loss’ is needed to assure passenger satisfaction and also to keep up the brand image of the railways. But should this be achieved by denying traffic blocks for urgently demanded track work and endangering the lives of passengers? DRMs and GMs are already under pressure to achieve their freight and passenger traffic targets and earnings management. One can understand their anxiety about not having enough social and bulk goods to carry. Even though the Indian economy is poised to grow at 7-7.5%, it, as of now, does not have much domestic coal or minerals to offer to the railways. However, the railways’ commercial fortunes are tied to these bulk goods. In the passenger business too, if we look at the passenger kilometres in the last five years, what is available for sale and what is actually sold have not seen much growth.

In a business environment driven by heightened commercial expectations and railways intercity transport brand image, the DRMs are tempted to often take risks by not reporting such defects and unsafe track conditions. The restrictions on gaining access to tracks for emergency repair works, due to denial of maintenance blocks, can drive track engineers to risky adventures. And there is reason to suspect that it was one such adventure that was enacted at Khatauli.

The harsh punishments that the railway administration might invoke to deal with human failures associated with rail disasters, could help in controlling mishaps to some extent. More urgently, the Indian raliways needs to worry about systemic issues.

The frequency of mishaps tied to broken rails and other track defects is an unmistakable symptom of a highly stressed-out track network that needs more than just track renewals. It actually demands need-based upgradations of track standards too.

India inherited rail tracks laid by the colonial government, mostly for military logistics purposes and as such, the track standards had generally been kept to a bare minimum. The truth is, that as much as 50,000 km of the present 66,000-km rail route was built by the colonial government as per standards meant for colonial natives. Not much has changed except converting the metre gauge into broad gauge, with hardly any track standard upgrades suitable to carry higher axle load freight vehicles and faster trains.

In India, Jawaharlal Nehru introduced the modernisation of trains. Subsequent prime ministers did not dwell much on the rail industry development or technology acquisition or modernisation till Vajpayee decided to make substantial investments in the renewal and rehabilitation of India’s fatigued track system and aged bridge structures on a national scale. The massive renewal and rehabilitation, planned and successfully implemented in 30 months between 2002-2005, is now more than a decade old. 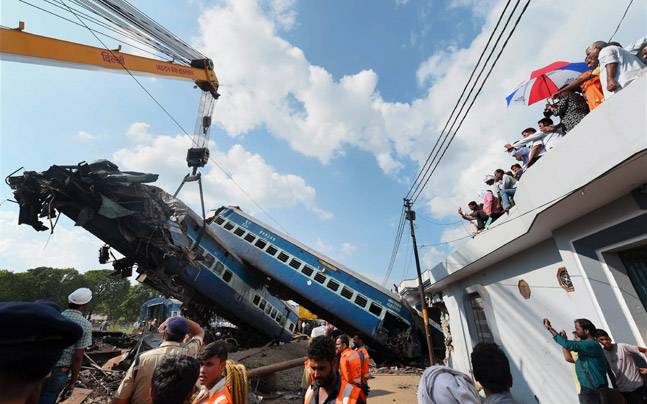 With a substantial increase in freight and passenger throughput, the track network urgently needs a massive dose of rehabilitation layered with need-based upgradation of track standards, if we want to prevent any further deterioration in track conditions. There was some talk about the rehabilitation of tracks for some time but the kind of high impact improvements visible in 2003-05 and beyond are missing now. Let there be no mistake, all that can be done on the existing permanent way, through rehabilitation with existing track standards, can only improve safety. It may also help in achieving marginally higher track speeds. However, such moderate investments in improving track standards can only result in incremental improvements, which will have limitations. In other words, it might not help much in running faster passenger trains with speed potential above 160 kmph and 25 tonne axle loads freight trains together on the same track system. Mixing 25 T-axle-load freight trains with passenger trains above 160 kmph can be open invitation to disasters.

The consequences of the tragic Khatauli accident have not been good for the country in general and the railways in particular. Non-compliance with even routine maintenance processes are causing accidents, particularly due to human failure, at almost all levels. Somewhere in the midst of this are two serious issues.

Are the methods of excessive monitoring of punctuality drives, clubbed with cleanliness drives, passenger amenities drives and every possible social media drive, spreading the system’s physical resources too thin? The second is the manner in which safety is monitored. Emphasis seems to be on spruced up repair statistics. Defects in track are identified. But is the pressure to report expeditious repairs leading to misreporting? Field inspections and accountability at appropriate levels are the only way out. If track repairs need time and resources, it must be stated upfront. The same must apply to rolling stock. I had earlier commented on the tendency of railway coaches to jack-knife in such incidents. The same has been repeated. Little appears to have been done on fundamental changes in coupling arrangements and coach designs.

Bold initiatives to enable passengers to directly complain or take grievances, 24×7, were a roaring success. However, has this not pushed the understaffed establishment a bit too much, to instantaneously respond to hundreds of passenger complaints daily and consequently distracted the attention of officials from their safety-related core duties? Has the railway board made ministers aware that the Indian Railways is not adequately staffed to man safety category jobs? Many senior railwaymen do misguide their railway ministers by loose talk that Railways are an overstaffed organisation. Loose talk that rests on complete absence of meaningful analytics of the performance statistics.

The Indian railways transports 1,100 million tonnes of freight – which is huge. In addition to freight, it handles 8,300 million passengers annually, which is the largest in the world. It takes a lot of staff to manage the world’s largest rail passenger volumes. There is one railway employee per 17 passengers. In the Western Railway, which is the busiest zone, the number of passengers handled by an average employee per day is as high as 40.

Lessons from the world

Let us look at any country in the world. Only India dares mix the world’s fourth largest freight volume with the world’s largest passenger volume on the same network by over-stretching its capacity utilisation. The more we allow this misadventure to linger, the more we are exposing customers to avoidable risks. The government has done it’s best to provide resources for completing the two legs of dedicated freight corridors (DFCs) for accelerated completion. The DFC project, which was launched in 2006, is now overdue for commissioning. DFCs will facilitate separation of rail freight business from passenger business and will provide a lot relief to the railway network .

Considering the limitations involved in running speedy intercity passenger trains on a completely “at-grade track network” such as India’s, where roads and highways intersect railways on an average of every two kilometres of route length is also going to be risky. More and more state highways, and rural and urban roads are being built every year in India. It means more roads will keep intersecting tracks .

To ensure safety, upgrading track standards would certainly help. However, it is also true that a substantial portion of the colonial-era railway system cannot take track upgrades beyond a limit. Therefore, the only alternative for India is to follow Prime Minister Narendra Modi’s vision of a ‘diamond corridor’, which was included in the BJP’s 2014 election manifesto. The railway ministry, which was given the task of developing the high-speed rail (HSR) corridor, reneged from the prime minister’s vision to float a parallel programme to operate 180-200 kmph semi-HSR on the existing at-grade embankments, which will be a disaster. Running such fast trains over at-grade track will kill more people. The modernisation of the railways with improved safety can be achieved only through the ‘diamond corridor’ if we want to connect more than 60 very big cities with the about one million passenger population and another 100 big cities with passenger population between 300,000 to one million, with a view to converting these cities into high growth centres. Regional airports and airlines alone cannot provide the kind of multiple intercity connectivity that a single HSR train is capable of providing. From the way in which the successful Rail Vikas Shivir was organised last year with the prime minister’s participation, it appears that a perfectly achievable vision for a modernised and absolutely safe rail network is the prime minister’s alone.

R. Sivadasan is a retired Financial Commissioner (Railways) and an ex officio Secretary to Government of India.