Days after J&K parties announced an alliance that would fight for the restoration of special status, Abdullah was summoned for his alleged role in the Jammu and Kashmir Cricket Association scam. 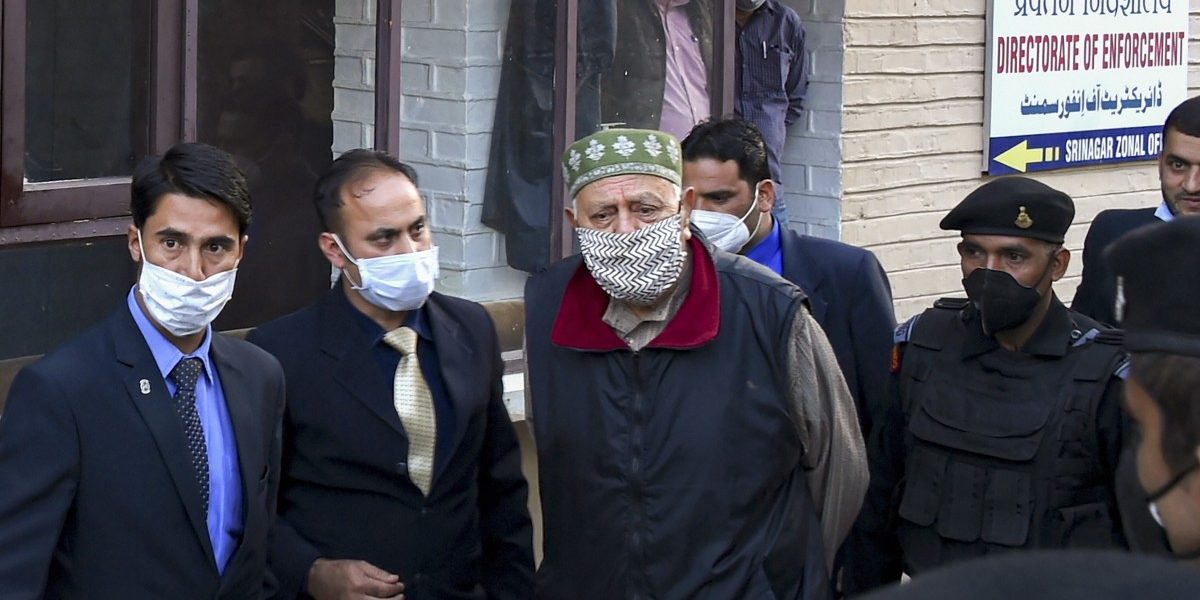 Srinagar: As the Enforcement Directorate on Monday questioned National Conference president Farooq Abdullah, political parties rallied behind the senior leader. His questioning, they said, was “political vendetta” by the Centre against the recently formed alliance by Jammu and Kashmir parties to fight the “unconstitutional” removal of the erstwhile state’s special status.

Abdullah was summoned by the central agency to its regional office in Srinagar at around 11:30 am and questioned for more than five hours, for his alleged role in the Jammu and Kashmir Cricket Association (JKCA) scam.

His questioning comes days after he chaired a meeting of political parties that are signatories to the Gupkar Declaration and announced the formation of the ‘People’s Alliance for Gupkar Declaration’ to fight for the restoration of J&K’s special status.

By the time Abdullah walked out of the ED office in the evening, a major political row had already broke out, with J&K parties targeting the BJP-led government at the Centre.

“The move is part of vindictive politics practiced by the central government to kill the dissent and disagreement across the country and in present case to silence the genuine demand for reversal of unilateral and unconstitutional decisions of 5th August 2019 and restoration of 4th August 2019 position,” said alliance members in a joint statement.

Hitting out at the Centre, the parties said “such tactics” would not dampen the will of the people of J&K and Ladakh to have their constitutional status restored. “The central government, unnerved by the unity amongst people across all regions and communities to pursue the goal of the Gupkar Declaration and support extended to it by political parties and civil society groups at national level is resorting to a game of witch-hunt and suppressions,” the statement said.

The parties asked the Centre to “realise the dangers” in the “process of witch-hunting and intimidation and desist from such vindictive designs”.

The party will be responding to this ED summons shortly. This is nothing less then political vendetta coming days after the formation of the People’s Alliance for Gupkar Declaration. To set the record straight no raids are being conducted at Dr Sahib’s residence.

The Gupkar Declaration was a unanimous resolution passed by all mainstream political parties, with the exception of the BJP, at Abdullah’s residence on August 4 last year, the day before the Centre diluted Article 370.

As per the declaration, the parties had resolved they would stand “united and defend identity, autonomy and the special status of the JK against all attacks and onslaughts whatsoever”. Abdullah had on August 15 this year called an all-party meeting to discuss the situation in Kashmir, but the administration did not allow the meeting to take place. On August 22, the signatories of the declaration surprised the government by issuing a joint statement describing the dilution of Article 370 as unconstitutional and a challenge to the basic identity of the people of J&K.

Last week, the Gupkar signatories after announcing the alliance vowed to fight for the restoration of Article 370 and resolution of the Kashmir dispute.

The National Conference asserted that BJP was using central agencies to target Abdullah after failing to fight him politically. “It is clearly the result of the unity that he has been able to forge among mainstream parties in J&K. This is the price one faces when opposed to BJP’s ideology and divisive politics. Recent history is witness to how BJP has been employing coercive measures through various departments to target opposition leaders across the country,” the party said.

In a joint statement, several National Conference leaders said New Delhi was “employing government machinery and malevolent tactics to subdue” Abdullah’s effort to forge unity among mainstream political parties. “This government is doing everything it can to silence the combined voice of people of J&K, which Dr Sahib has been able to forge,” said the party leaders.

ED’s sudden summon to Farooq sahab displays the extent of GOIs nervousness about mainstream parties in J&K fighting as one unit. Also reeks of political vendetta & wont in the least blunt our collective resolve to fight for our rights. https://t.co/jasXiiZqH7

What a sorry state of affairs. Dr Farooq sahib summoned by ED. Reeks of vendetta. Contrary to what they want to coercively achieve this will certainly have the opposite impact.

What is the JKCA ‘scam?’

The scam surfaced in 2012 when the police registered an FIR against former treasurer of the Jammu and Kashmir Cricket Association (JKCA), Ahsan Mirza and the body’s former general secretary, Saleem Khan. They were charged with allegedly diverting Rs 43 crore, received from the BCCI, to three different accounts opened in the name of the JKCA in the Jammu and Kashmir Bank. The funds were allegedly diverted to these “bogus accounts and subsequently siphoned off”. Abdullah was the JKCA president at the time.

In 2015, Jammu and Kashmir high court transferred the case to the Central Bureau of Investigation for a probe while indicting J&K police for failing to carry out an investigation. Subsequently, the ED also filed an FIR in the case.

The last time Abdullah was summoned by the ED was in July 2019, days before the government of India’s August 5 move to abrogate J&K’s special status Kashmir under Article 370 and bifurcate the erstwhile state into two Union territories.

Abdullah had reportedly received the ED summons on October 16. The agency, quoted by news agency PTI, said Abdullah’s statement will be recorded under Prevention of Money Laundering Act (PMLA).

‘Not worried, political battle will continue’

Coming out of the ED office after his questioning, Abdullah said he was not worried. “They have their job to do; I have my job to do. The questioning has been going on for many years, it is nothing new. I am not going to say anything. The court will decide what is to be done. I am not worried,” Abdullah told media persons.