The circular issued by the Department of Education of Delhi, which is being shared widely by members of the BJP, nowhere mentions that the scheme to reimburse the school fees of minority students applies only to Muslims.

A circular issued by the Directorate of Education of Delhi regarding the reimbursement of tuition fees to minority students of classes 1 – 12 is being widely shared on social media with the claim that the Kejriwal-led Aam Aadmi Party (AAP) government in Delhi is trying to appease Muslims through such policies.

It is being alleged that the order is only applicable to Muslims.

The Bharatiya Janata Party’s (BJP) Delhi spokesperson and media in-charge, Harish Khurana, tweeted a screenshot of this circular saying that it is not wrong to accuse Kejriwal of indulging in Muslim appeasement, saying this circular is an example.

Another BJP spokesperson, Vikram Bidhuri, tweeted a screengrab of this circular asking whether being a Hindu is a crime. He further alleged that after the salary of maulvis (Muslim priests), the Kejriwal government will refund two-year fees of Muslim children studying in private schools.

Alt News performed a keyword search and found a copy of the order on the website of the education department. Nowhere does the order state that the reimbursement of tuition fees is only applicable to Muslim minority students. 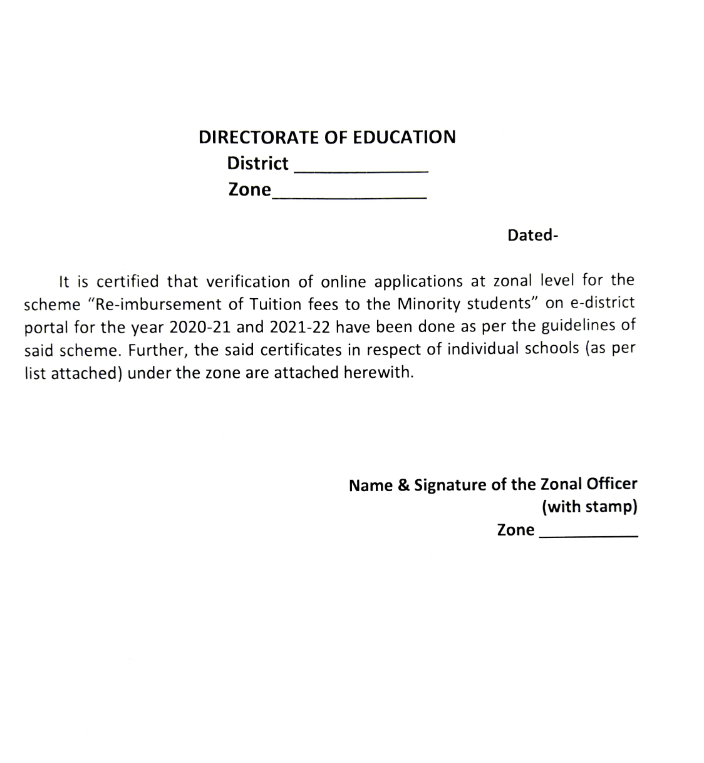 Copy of a verification certificate on the education department’s website. Photo: Alt News. 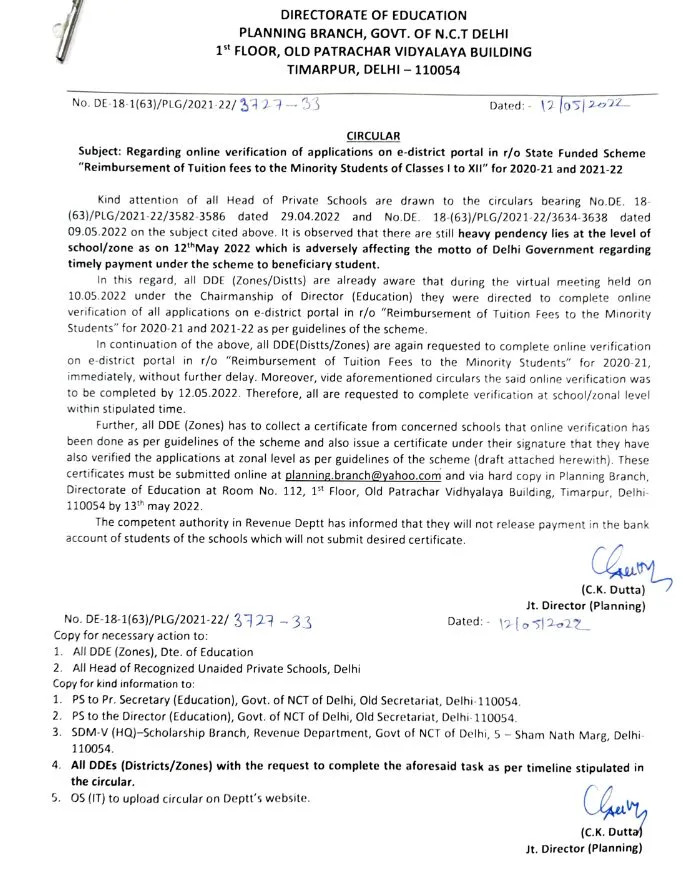 A copy of the circular in question on the education department’s website. Photo: Alt News.

According to various news reports, the Delhi government has issued instructions to refund the tuition fees of eligible minority students of all private schools in Delhi. The Directorate of Education of Delhi, in its instructions, has asked education officers to ensure the completion of the tuition fee refund process for minority students for the years 2020-21 and 2021-22. None of the news reports mention that the policy is applicable to students of a particular religion only.

Evidently, the reimbursement of fees is applicable to all these minority groups present in the national capital. 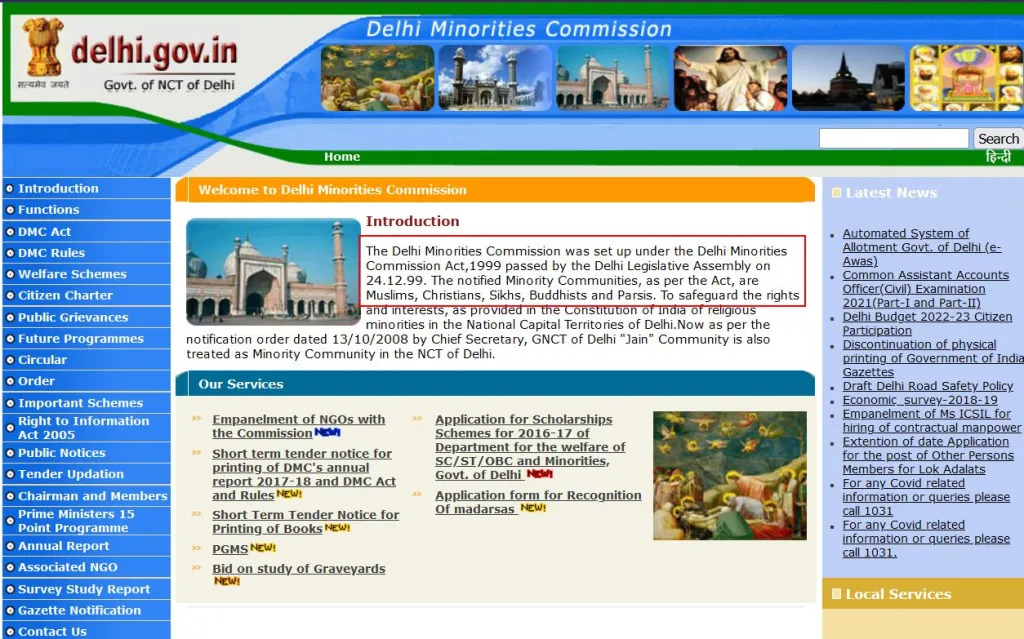 Screenshot from the website of the Delhi Minorities Commission. Photo: Alt News.

Alt News also found the perquisites for applying for this scheme. As per the official website of the Department for the Welfare of SC/ST/OBC, students with a family income below Rs 2 lakh per annum can apply for reimbursement of fees. It is applicable to SC/ST/OBC and other minorities.

Other details include the fact that students of classes 1-5 coming from SC, ST, OBC and minority communities are eligible to get the refund of tuition and other mandatory fees. The marks of these students will not matter. But in the case of students from classes 6-12, tuition and other compulsory fees will be refunded only to those students who have secured 50% or more marks in the previous class and their attendance is not less than 80%. 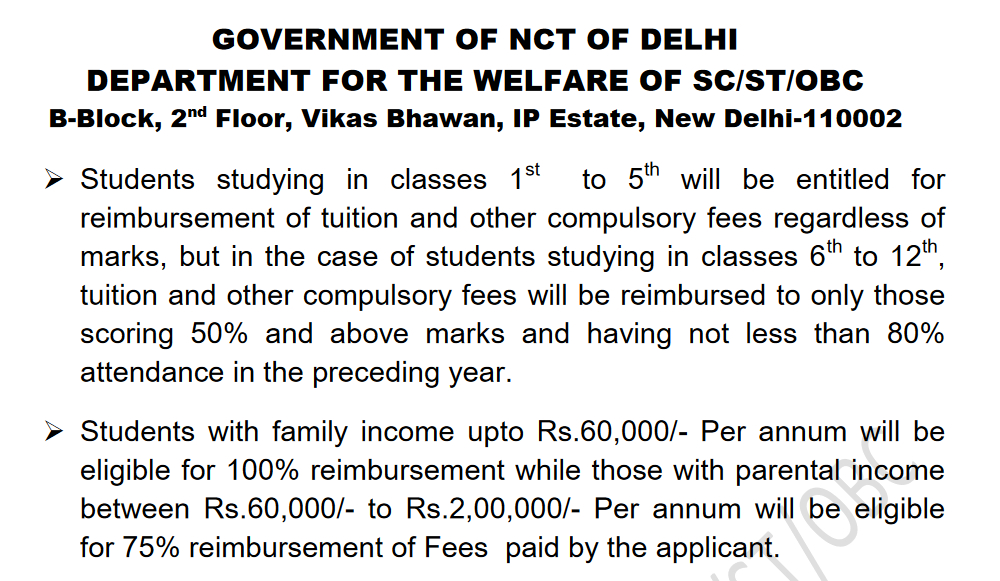 Prerequisites for applying for the scheme on the website of the Department for Welfare of SC/ST/OBC (1/2). Photo: Alt News. 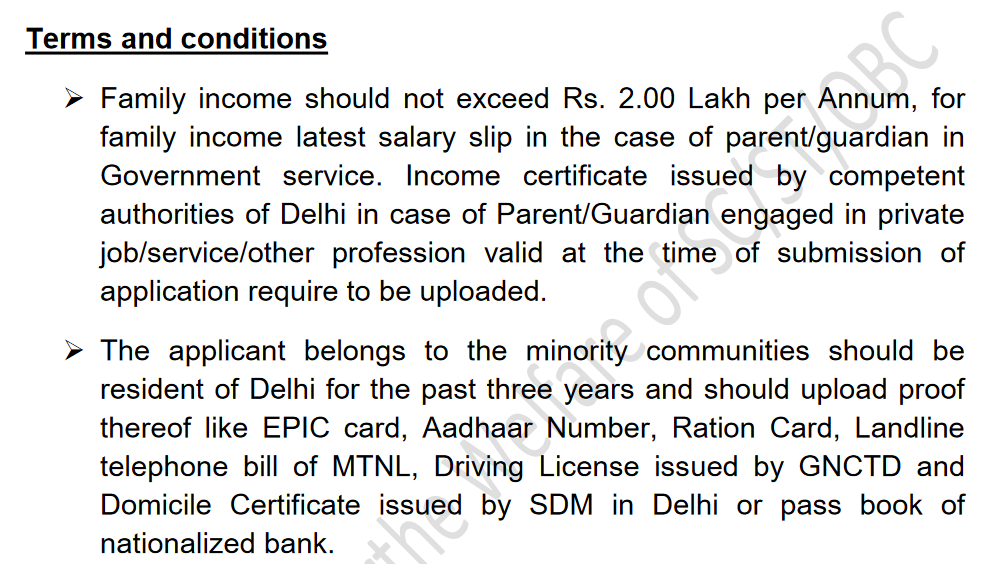 Prerequisites for applying for the scheme on the website of the Department for Welfare of SC/ST/OBC (2/2). Photo: Alt News.

To sum it up, the reimbursement of tuition fees is applicable to all recognised minority students in classes 1-12 in Delhi.