The drop in exports of leather products comes as a setback for PM Modi who has sought to create millions of jobs by more than doubling the leather industry's revenues. 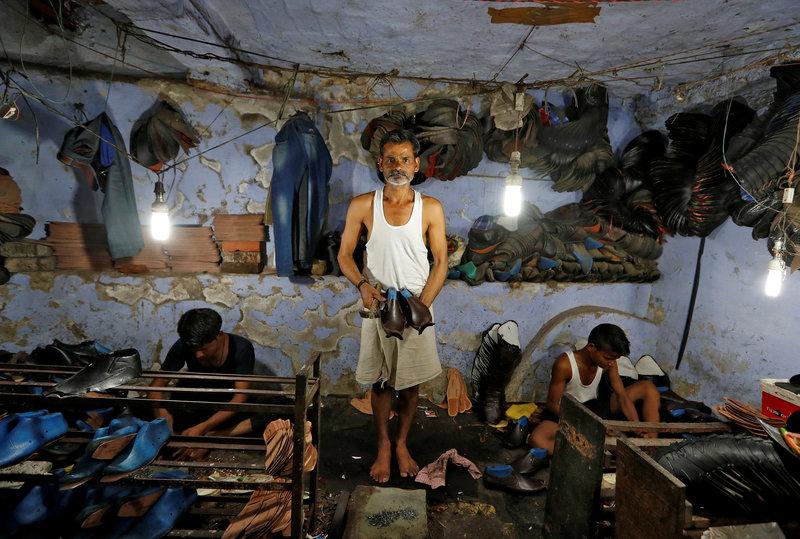 A shoemaker poses for a picture in an underground workshop in Agra, India, June 9, 2017. Credit: Reuters

A government crackdown on Muslim-dominated abattoirs and the trade of cattle dragged down India’s exports of leather shoes by more than 13% in June, as leading global brands turned to China, Bangladesh, Indonesia and Pakistan to secure supplies.

The drop in exports of shoes and leather garments comes as a setback for Prime Minister Narendra Modi, who has sought to create millions of jobs by more than doubling the leather industry’s revenues to $27 billion by 2020.

Emboldened by the victory of Modi’s Bharatiya Janata Party (BJP) in the 2014 general election, Hindu hard-liners, who consider cows sacred, became more assertive in their calls for a clamp-down on both the meat and leather industries, run by Muslims, who make up 14% of India’s 1.3 billion people.

“The writing was already on the wall,” Nazir Ahmed, CEO of shoemaker Park Exports, told Reuters by phone from Agra, a shoe-making hub and home to the Taj Mahal. “We have killed the goose that laid the golden egg.”

India, the world’s second-biggest supplier of shoes and leather garments, exports nearly half its leather goods, with overseas sales estimated at $5.7 billion in the 2016/17 fiscal year to March, down 3.2% from a year earlier. Footwear exports fell more than 4% in April-June, to $674 million.

In March, after being appointed chief minister of UP, India’s most populous state and a major leather exporter, Yogi Adityanath, a firebrand Hindu monk, ordered a closure of abattoirs operating without licenses.

Slaughterhouse owners complain that much of India’s meat and leather trade takes place in the informal sector, and it’s hard to get licences, especially for smaller units.

In May, citing cruelty to animals, the federal government banned the trade of cattle for slaughter, and restricted livestock sales only for agricultural purposes such as ploughing and dairy production.

But the country’s top court overturned that order, citing the hardship the ban had caused.

That has not brought relief as repeated attacks on trucks carrying cattle still rankle the leather trade.

“The supreme court has allowed the resumption of trade for cattle, but the ground reality is that cow vigilante groups continue to be active and no one wants to risk his life by transporting cattle,” Ahmed said.

Deterred by a clutch of measures that squeezed the supply of leather, a key raw material, brands like H&M, Inditex-owned Zara and Clarks, cut back their orders to India, said M. Rafeeque Ahmed, a leading shoe exporter from the southern city of Chennai and former president of the Federation of Indian Export Organisations.

“We lost orders because our buyers were skeptical of our ability to meet their requirements. Instead, most buyers moved to rival suppliers in Asia and southeast Asia,” he said.

A spokesman for India’s trade ministry declined to comment.

The industry is also grappling with a Goods and Services Tax(GST), introduced in July, which has pushed up production costs by 6-7% exporters said.

The crackdown also hurt day-workers employed at shoe and garment making units and hit leather supplies, forcing manufacturers to import hides from the US, Australia, and some European nations, raising the cost of production and squeezing margins.

Many tanneries, as a result, have run out of leather.

“My business has come to a standstill because I don’t have any inventory at all. Most large shoemakers are importing hides now,” said a tannery owner, who asked not to be named so as to avoid retaliation from cow vigilante groups.

Nearly a third of the roughly 3 million-strong workforce, mostly lowly-paid casual workers employed in the leather sector, have lost their jobs in the past six months, according to six shoemakers and two tannery owners interviewed by Reuters for this article.

Since most Indian states have outlawed cow slaughter, the supply of leather largely comes from the legal slaughter of buffaloes whose skins are used in many leather goods.

“Everyone must abide by the rule on cow slaughter and respect sentiments, but by choking the supply of other animal hides, we have nearly killed a thriving industry,” said Ahmed of Park Exports.