Explainer: Why 12 RS MPs Were Suspended and Why Opposition Feels This Is Unconstitutional

The opposition is united against the Chair’s decision to suspend MPs for the winter session on the basis of their actions in the previous session. 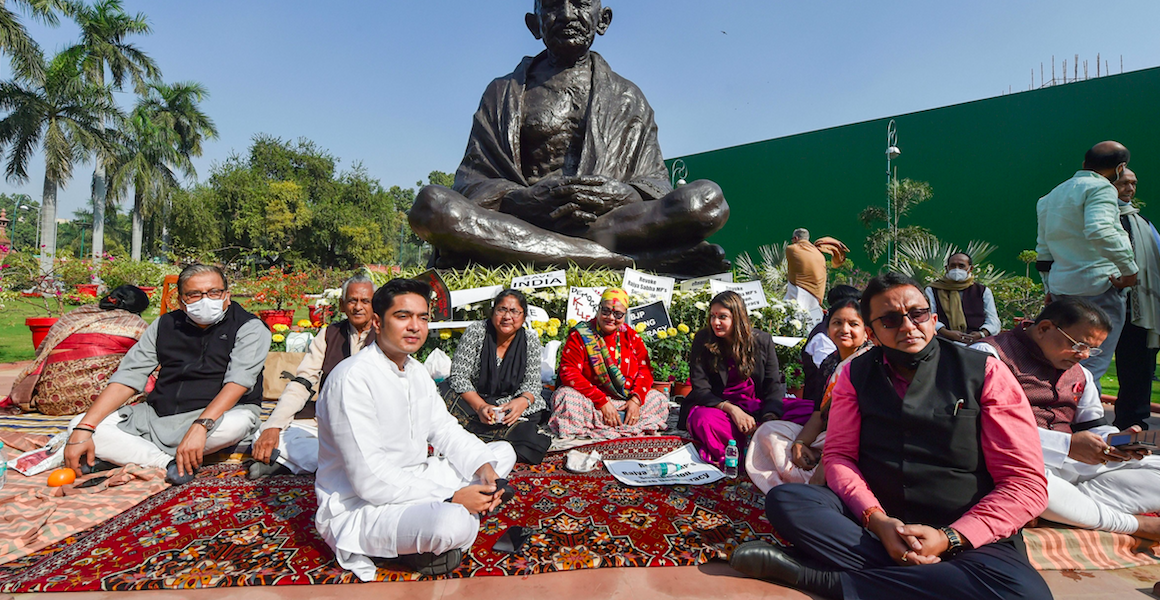 AAP MP Sanjay Singh and RJD MP Manoj Kumar Jha join suspended Rajya Sabha MPs who have been staging a protest dharna near the statue of Mahatma Gandhi demanding revocation of their suspension, during the Winter Session of Parliament, in New Delhi, Tuesday, December 7, 2021. Photo: PTI

New Delhi: Around 120 opposition Rajya Sabha MPs have decided to join the sit-in protest in the parliament complex against the suspension of 12 members of the Upper House from the ongoing winter session.

Opinion among constitutional experts is, meanwhile, divided on whether Chairman Venkaiah Naidu was right in suspending them.

It was on November 29, the first day of the winter session that Naidu suspended the 12 MPs, from five political parties, for the rest of the session, for what Naidu claimed was “unruly conduct” on the last day of the monsoon session on August 11. Marshals were called after opposition members stormed the Well of the House during the passage of the General Insurance Business (Nationalisation) Amendment Bill, 2021.

The Chairman adjourned the house and the Rajya Sabha Parliamentary Bulletin that day listed 33 members for obstructing proceedings.

The order stated that they were being suspended for “unprecedented acts of misconduct”, “unruly and violent behaviour” and “intentional attacks on security personnel”. 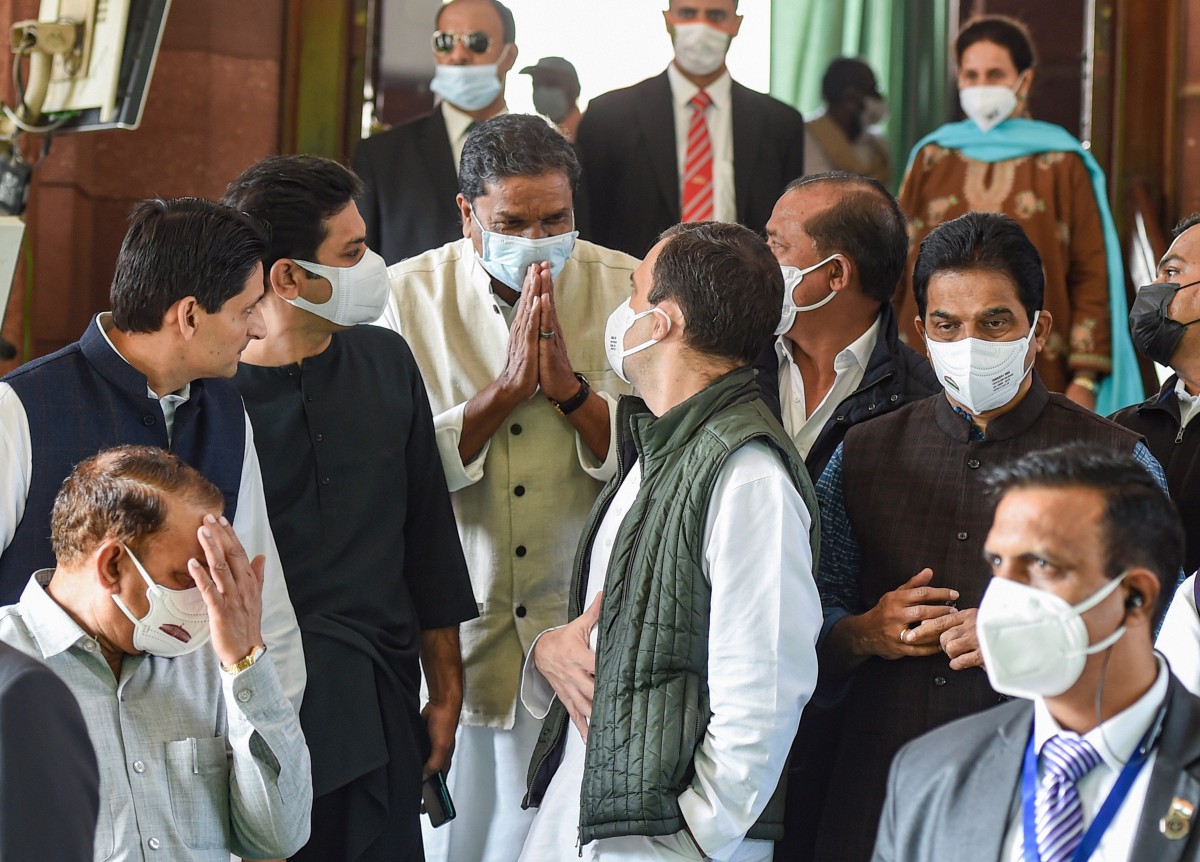 “The government was compelled to place this proposal of suspension before the House. If these 12 MPs apologise to the Speaker and the House for their misbehaviour even now, then the government is ready to consider their proposal positively with an open heart,” he said.

However, the opposition has contested that the decision, which was announced after the Bill to repeal the farm laws was passed in Rajya Sabha, was aimed at providing a brute majority to the ruling party in the Upper House.

A ‘Joint Statement by Leaders of Opposition Parties of Rajya Sabha termed the suspension as “unwarranted and undemocratic” and “in violation of all the Rules of Procedure of Rajya Sabha pertaining to suspension of members”.

They said the motion to suspend the members “in regard to the unfortunate incident that occurred in the previous session is unprecedented and violates the Rules of Procedure and Conduct of Business of the Council of States (Rajya Sabha).”

Subsequently, the Leader of Opposition in Rajya Sabha, Congress leader Mallikarjun Kharge, also wrote to the Chairman stating that the suspension did not follow the procedure prescribed in Rule 256. He also insisted that though the Rajya Sabha is a continuous institution, the winter session was a new session since the monsoon session was prorogued and this marked an end to it.

Incidentally, Rule 256 of the Rules of Procedure and Conduct of Business in the Council of States deals with the procedure required for the suspension of a member.

Rule 256(1) states that the chairman of the house “if he deems it necessary, [may] name a member who disregards the authority of the Chair or abuses the rules of the Council by persistently and wilfully obstructing the business” of the house.

Likewise, Rule 256(2) lays down that after the member is named, a motion can be moved for their suspension for a maximum period of the “remainder of the session”.

The Opposition leaders have claimed that the Chairman never called out the names of the members as required under Rule 256(1), and that this negates the suspension motion which was passed under Rule 256.

Plus, the President had prorogued the Rajya Sabha on August 31, thus marking an end to the monsoon session – therefore the MPs could not be punished now, in the winter session, for actions in the previous session, they have said. 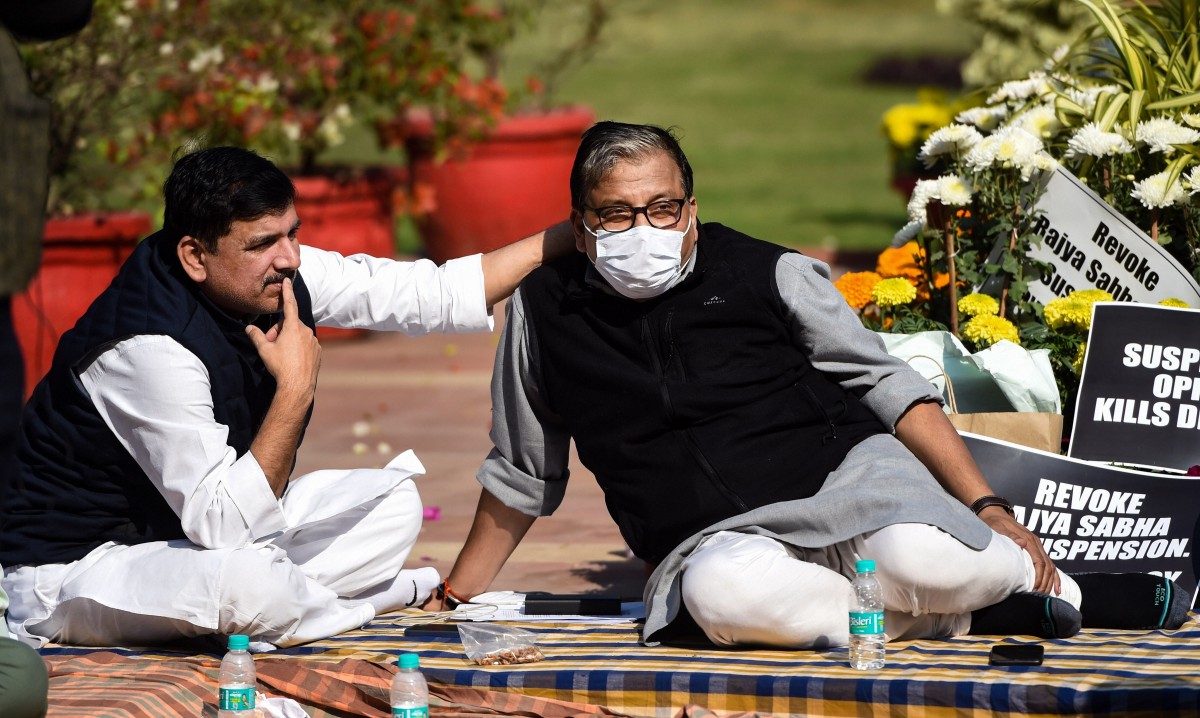 Former secretary-general of Lok Sabha, P.D.T. Achary, was quoted by Scroll.in as saying: “These are all part of the same transaction: naming the member, motion [for suspension] and suspension. It has to take place then and there.”

He said that because the chair had adjourned the house after disruptions in the Rajya Sabha on August 11, “under these rules, the chair should have named those members and then the motion should have come that they should have been suspended,” and this is something which was “not done”.

He also insisted that while Naidu is now stressing that the Rajya Sabha is a “continuing institution” which is never dissolved, the action against the MPs cannot be justified now.

“[For] something which happened in the last session, you cannot take action against them in the next session. There is no rule which permits this. Action must have been taken then and there.”

As for the issue going into the next session, Kashyap said, “it has been happening all the time”.

He said in the matter of Congress president Sonia Gandhi, who faced a privilege notice before the party came to power in 2004, the matter had gone not only to the next session but to the next House (after Lok Sabha elections). In this case “violation of parliamentary privilege and contempt of the house, she was suspended from the house. Later, not only in the next session but in the next house [after Lok Sabha election] when she came in the majority, her suspension was retrospectively taken back. The word used was, ‘rescinded’, which meant as if it [suspension] never happened”.

He said this was “common in Indian parliamentary practices, because such matters are referred to a committee which examines them. It takes time during which the presiding officer seeks the views of relevant parties. The session comes to an end by the time the report is ready.”

Likewise, former Lok Sabha secretary and constitution expert S.K. Sharma said: “The House can punish its members or outsiders for bringing disrepute to the legislature. The power of the house includes the power to suspend a member from attending the sitting for a day or for the remainder of the session.”

Sharma said, “If the committee finds that violation was serious enough to be given a punishment as a deterrent for other members, the house or the chairperson announces the decision.” On the decision coming in the next session, he defended the action saying, “this is the same house, the same chairman and also the presiding officer is the same, only the session is different. The report has come and punishment announced.”