This report is a joint collaboration between The Wire and Guwahati-based news portal The Cross Current. Read the previous reports of the series, on ‘urgent’ orders to a firm owned by Himanta Biswa Sarma’s wife Riniki Bhuyan Sarma, here and the bulk of Assam’s sanitiser orders going to a firm linked to Sarma, here.

Guwahati: A clutch of RTI replies from the Assam government show that a firm owned by a former business associate of state chief minister Himanta Biswa Sarma’s wife was also among the top recipient of the pandemic-related procurement orders by the state health ministry during his tenure.

Earlier, The Wire and The Cross Current reported that the BJP-led Assam state government also gave preferential treatment to firms owned by Ghanshyam Dhanuka, a close business partner of the Sarma family, and to JCB Industries owned by Sarma’s wife Riniki Bhuyan Sarma.

RTI replies from the state National Health Mission (NHM) to The Cross Current on March 10, 2022 have shown that Agile Associates, a firm owned by Guwahati-based businessman Rajib Bora, had bagged one of the most lucrative contracts from the state government to procure personal protective equipment (PPE) kits after the national lockdown was imposed on March 25, 2020.

As per an annexure of pandemic related supplies attached to the RTI replies, Agile Associates delivered 10,000 PPE kits to the NHM on April 10, 2020, at Rs 2,200 per piece. Only two companies sold kits at a higher price.

Similarly, prior to the lockdown announcement, the Sarma-led health ministry had issued urgent supply orders for PPE kits at a much higher rate – Rs 990 per kit – to his wife’s firm JCB Industries and his family’s business associate Ghanshyam Dhanuka’s firm Meditime Healthcare even though the NHM could procure PPE kits at Rs 600 each from another firm on March 18, 2020 itself. 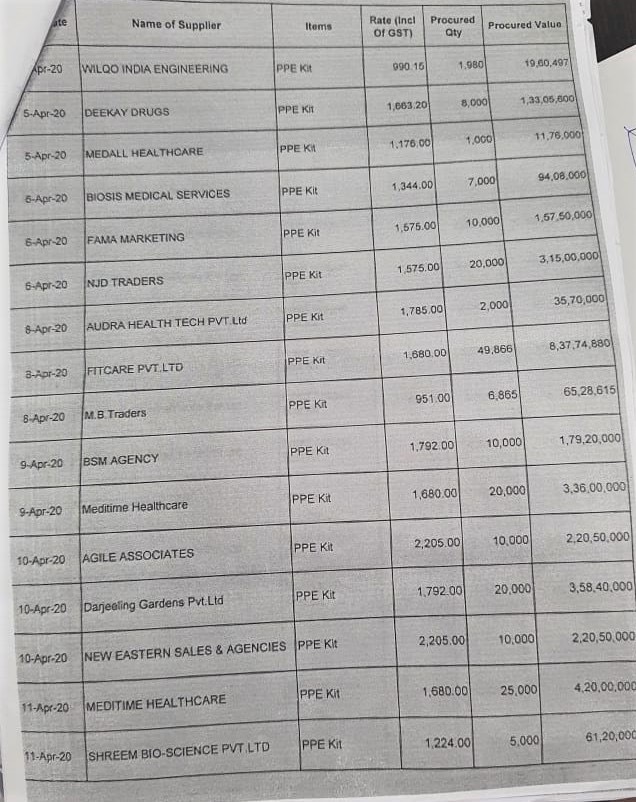 Agile Associates’ owner Rajib Bora is also the current director of another company – Digitech Media and Entertainment Pvt Ltd. Sarma’s wife Riniki Bhuyan Sarma was a founding co-director of that company with Bora’s wife Anjana Bora until 2009, according to Ministry of Corporate Affairs documents supplied to The Cross Current. After Bhuyan’s exit in 2009, Rajib Bora became its director along with his wife.

Interestingly, some investors in Digitech – based out of Kolkata – are common to RBS Realtors (now Vasistha Realtors) in which Sarma’s son Nandil Biswa Sarma is currently a majority shareholder and Ghanshyam Dhanuka’s father Ashok Dhanuka is a director. The investors of Digitech appear to have put their money in Padamavati Traders (India) Pvt Ltd also, a company in which both Ghanshyam and Ashok Dhanuka are currently directors. Prior to the Dhanukas, Sarma’s wife and father, late Kailash Nath Sarma, were that company’s directors.

More details on it later in the report.

Six different rates on the same day for PPE kits

As per the RTI replies, the price at which the Boras’ Agile Associates was asked to supply PPE kits was one among six different rates that the NHM had procured the safety gear on April 3, 2020. It included procurement of PPE kits at two rates even from Haryana based SDS Electronics Private Limited – at Rs 2,730 for urgent supply of 8,000 PPE kits, and at Rs 2,100 each for 6,000 kits. Assam was then facing a severe shortage of PPE kits, Sarma – the health minister at the time – told the local media, which could have forced the government to agree to any terms/conditions and asking rate by the suppliers.

While the official records reveal that the price range of the pre-lockdown orders for PPE kits varied between Rs 600 and Rs 1960 per piece, it shot up to as much as Rs 2,670 per kit (to SDS Electronics) in the days following the announcement of the national lockdown on March 24, 2020.

The annexure attached to the RTI replies reflects that in the pre-lockdown period between March 18 and March 23, 2020, the lowest rate was quoted by Assam-based NE Surgical Industries (it supplied 1,790 kits at the rate of Rs 600 per piece as per NHM record on March 18, 2020), while the highest rate was paid to Bangalore-based TBS Telematic and Biomedical Services Pvt. Ltd – at Rs 1,960 per piece to buy 1,000 PPE kits. That work order was approved by NHM on March 23, 2020.

According to the government of India’s GST portal, the NE Surgical Industries which could supply PPE kits to the Assam health department at the lowest rate – the same day when Sarma’s wife’s company JCB Industries was issued an urgent work order at the rate of Rs 990 per piece – is owned by Guwahati-based businessman Rajendra Kumar Deorah. The official documents till January 4, 2022, showed that NE Surgical Industries didn’t feature as a supplier of COVID-19 related procurement thereafter.

However, as per the GST portal, yet another firm run by Deorah – Itas G Pharma – did supply PPE Kits to the NHM at a much higher rate than its sister company’s rate of Rs 600 in the post-lockdown period. On April 2, 2020, Itas received a supply order from the NHM for 15,000 PPE kits at the same asking rate as that of Dhanuka’s Meditime Healthcare – Rs 1,680 per piece.

Similar inconsistencies in the prices of PPE kits supplied to the NHM can be spotted in a number of RTI responses received by The Cross Current.

Although Agile Associates was hired by the state health department under Sarma for pandemic related supplies, local media reports show that in 2017, yet another company owned by Bora – Brahmaputra Television Network – was blacklisted by the BJP-led regime under Sarbananda Sonowal for its alleged involvement in an advertisement scam that caused a loss of Rs 33 crore to the Directorate of Information and Public Relations (DIPR).

News reports had said that Rajib and Anjana Bora, the owners of Brahmaputra Television Network, were summoned by Sonowal’s Special Vigilance Cell for the firm’s alleged involvement in the former Congress government’s ‘Vision Assam Mission Assam’ campaign, launched just prior to the 2016 assembly elections to promote the Tarun Gogoi regime’s achievements. The campaign was allegedly outsourced to various agencies at inflated prices, causing losses to the government.

The couple got anticipatory bail from the Supreme Court in November 2017.

In September 2020, the supplementary chargesheet in the case had named the Boras as accused in the case.

The fact that Agile Associates managed to secure medical contracts from the Sonowal government despite the tainted record of its owners caught public attention. The Guwahati-based civil society group, Assam Public Works (APW) raised an allegation of misappropriation of public funds during the pandemic against the company.

As stated in an earlier report by The Wire, Rajib Bora filed a defamation case on July 24, 2020 at the court of the civil judge Rajeev Kumar Deka, Kamrup (Metro) against APW founder Abjijit Sarma and the editor of a local channel, Pratibimba Live. The court, while continuing to hear the case, clamped a temporary injunction directing the defendants to “restrain from making any further alleged defamatory statement concerning the purchase of PPE kits and also to restrain opposite party 2 (Pratibimba Live) from broadcasting any defamatory news in respect of subject matter of the suit via any media as on July 23, 200 till next”.

As stated above, the Bora family’s close business association with Sarma’s wife Riniki Bhuyan Sarma goes back to 2008 – when Anjana Bora and the chief minister’s wife (then the state health minister) started a company, Digitech Media and Entertainment Pvt. Ltd as co-directors.

Documents procured from the Ministry of Corporate Affairs showed that Sarma’s wife was ejected from the company in 2009 and was replaced by Rajib Bora.

Significantly, the information provided by the ministry has also revealed a common thread. The Bora family’s Digitech, RBS Realtors (now Vasistha Realtors Pvt Ltd), in which the chief minister Sarma’s son has majority shareholdings, and Padamavati Traders (India) Pvt Ltd, where the chief minister’s father and wife were once directors and Ghanshyam Dhanuka and his father Ashok Dhanuka are the current directors, have common, Kolkata-based investors.

What is noteworthy is that Ashok Dhanuka had taken over the director’s position at RBS Realtors after the chief minister’s wife Riniki Bhuyan Sarma resigned from the director’s chair on June 6, 2009, as shown in an earlier investigative report by The Wire and The Cross Current.

According to Himanta Biswa Sarma’s election affidavit, filed before the 2016 assembly polls, Riniki was shown to have borrowed Rs 10 lakh from Padamavati Traders.

Sieving through the documents it comes across that these three companies have at least one common Kolkata-based investor –Echolac Vinimay Pvt Ltd.

The Wire visited the Kolkata address of Echolac Vinimay Pvt Ltd and also the addresses of the Elegance Trade and Holdings Pvt Ltd – provided by them to the Ministry of Corporate Affairs – but failed to locate any signboard or semblance of an office at any of the sites.

What The Wire found in these two addresses were dingy rooms with the doors wide open with mostly garment traders frequenting them. The first floor of the building that is stated to house Echolac’s office in the government documents also has a one room temple. 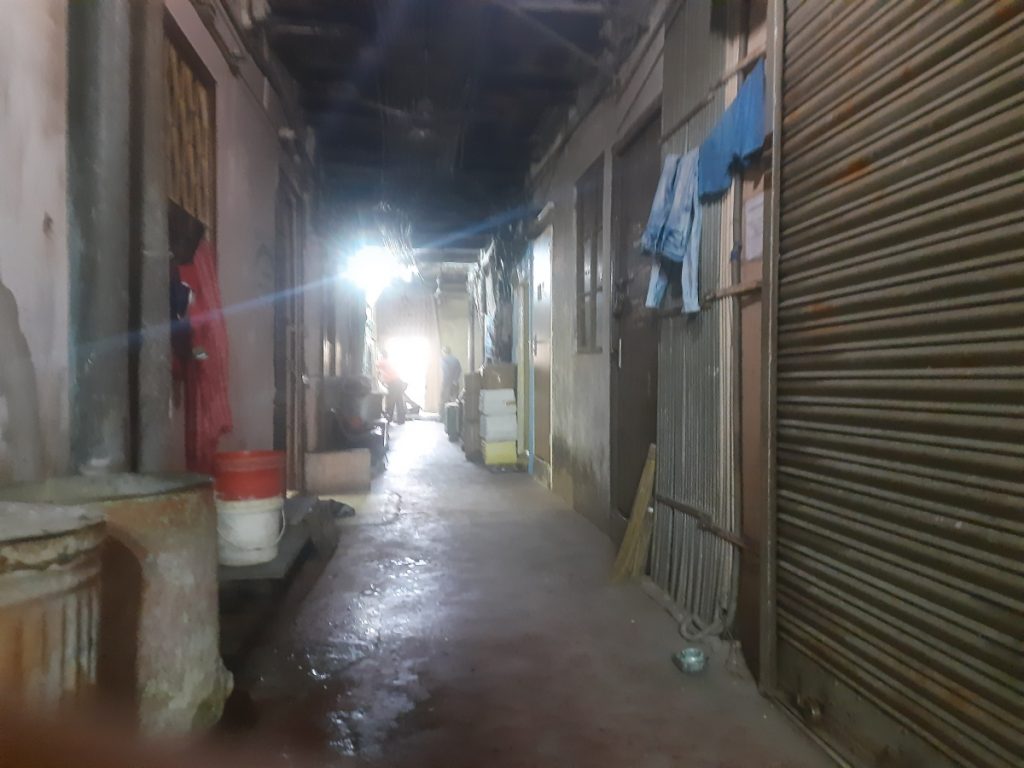 As per the ministry’s documents, a total of Rs 6.11 crore was pumped in by the Kolkata-based investors in these three commercial entities run by the Bora, Dhanuka and Sarma families between 2007 and 2009.

(Additional reporting and photos by Snigdhendu Bhattacharya in Kolkata.)