Centre Allows COVID Vaccines for Anyone Above 18, But Price Will Be Set by Private Players

Vaccine manufacturers will now be empowered to release up to 50% of their supply to state governments, who can procure vaccines directly from manufacturers. 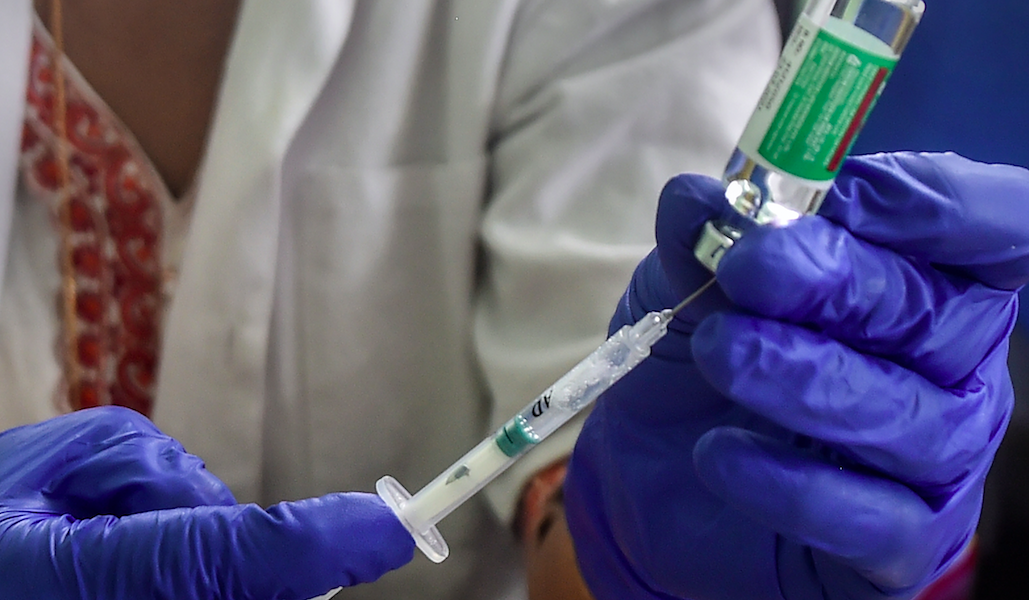 A medic prepares to administer the dose of COVID-19 vaccine to a beneficiary, amid surge in corona virus cases across the country, in Kolkata, Monday, April 19, 2021. Photo: PTI

New Delhi: Following a meeting chaired by Prime Minister Narendra Modi, days into a significant surge in COVID-19 cases in the country, the Centre has announced that everyone above the age of 18 will be eligible to receive COVID-19 vaccine shots from May 1.

The earlier age limit was 45. But the new policy comes with a price: vaccine manufacturers and private vaccination providers will get to set their own price for half their output. And the government has not specified a cap.

This is what the health ministry’s press release says:

“Manufacturers would transparently make an advance declaration of the price for 50% supply that would be available to State Govts. and in open market, before 1st May 2021. Based on this price, State governments, private hospitals, industrial establishments etc would be able to procure vaccine doses from the manufacturers. Private Hospitals would have to procure their supplies of Covid-19 vaccine exclusively from the 50% supply earmarked for other than Govt. of India channel. Private Vaccination providers shall transparently declare their self-set vaccination price. The eligibility through this channel would be opened up to all adults, i.e. everyone above the age of 18.”

The Centre has also said that the procurement, eligibility and administration of vaccines is being made flexible in Phase 3 of India’s vaccination drive.

Vaccine manufacturers will now be empowered to release up to 50% of their supply to state governments and in the open market at a pre-declared price, the government has announced.

States, too, have crucially now been asked to “procure additional vaccine doses directly from the manufacturers”.

The advance declaration of the price for the 50% supply that would be available to the state governments and in the open market has to be made before May 1, 2021, the official statement by the Union Health Ministry said.

Private hospitals would have to procure their supplies of COVID-19 vaccine exclusively from the 50 per cent supply earmarked for entities other than those coming through the central government channel.

“The private vaccination providers would need to transparently declare their self-set vaccination price and the eligibility through this channel would be opened up to all adults, that is everyone above the age of 18,” the statement added.

In addition to a public interest litigation at the Supreme Court, which pleaded for the minimum age for vaccines to be lowered, several state governments helmed by parties in the opposition to the Bharatiya Janata Party have in the past few days written to the Centre and the prime minister, asking for the vaccination drive to be broadened.

A day ago, on April 18, former Prime Minister Manmohan Singh wrote to Prime Minister Narendra Modi on the COVID-19 crisis, stressing that ramping up vaccination was the key to battling the pandemic.

Several experts, including epidemiologist Bhramar Mukherjee, who also spoke to The Wire, had noted that India needed to act on vaccination while COVID-19 cases were in the “valley”, i.e. before the surge in case numbers.

In the meantime, India’s vaccine rollout process also received setbacks in the form of shortages, leading centres across the country to stop vaccinating people.

“The total production capacity of the manufacturers of Covishield and Covaxin, the two local players, is roughly 24 lakh vaccines a day. The current demand is 37 lakh vaccines a day,” The Wire had noted in an analysis on April 10. Coupled with commitments to the global vaccination facility, COVAX, India also continues to face increasing demand for shots.

In the latest decision by the Centre, manufacturers have further been “incentivised to further scale up production, attract new national and international players,” the Centre announced.

The Centre’s vaccination drive, it noted, will continue as before. Within it, free shots will be provided for “essential and priority populations as defined earlier”, including healthcare workers, frontline workers and people above 45 years of age.

All vaccinations will be under the Liberalised and Accelerated Phase 3 Strategy of the National COVID-19 Vaccination programme and will have to follow all protocol such as being captured on CoWIN platform, linked to AEFI reporting and all other prescribed norms, the government has said. Stocks and price per vaccination applicable in all vaccination centres will also have to be reported real-time.

The division of vaccine supply – 50% to the Centre and 50% to other channels would be applicable uniformly across for all vaccines manufactured in the country.

“The government of India from its share will allocate vaccines to states and UTs based on the criteria of extent of infection (number of active COVID cases) and performance (speed of administration). Wastage of vaccine will also be considered in this criteria and will affect the criteria negatively. Based on the above criteria, state-wise quota would be decided and communicated to the states adequately in advance,” the statement stated.

Second dose of all existing priority groups – healthcare workers, frontline workers and population above 45 years, wherever it has become due, would be given priority, for which a specific and focused strategy would be communicated to all stakeholders.

The strategy will be reviewed from time to time.

Commenters on social media have voiced concerns as to whether this announcement signifies the Centre’s decision to withdraw itself from the pricing and allocating process and the consequences such a decision can have.