The question is if lawmakers will approve this illegal move which seriously endangers forests and all its inhabitants, including forest-dwellers. The 2022 Forest Conservation Rules are to be placed for approval before the Lok Sabha and the Rajya Sabha for 30 working days in one or more sessions. The question then is if lawmakers will approve this illegal move which seriously endangers forests and all its inhabitants, including forest-dwellers. If they disagree, will they simply clip the venomous parts of the Rules or will they actually modify them to comply fully with the Forest Rights Act? The latter is what they ought to do.

The next Parliament session is from July 18 to August 12. We will soon know where their fealties lie: with the laws of the land and the forest-dwellers, especially the tribals – at a time when the ruling dispensation has nominated Draupadi Murmu, a member of a Scheduled Tribe, to the post of the President of India.

The Forest Rights Act – a historic enactment and a flagship law of the Indian Parliament – was promulgated to undo the historic injustice heaped on the country’s forest-dwellers, especially the tribal peoples, for more than a century since 1878. It recognised and vested all forest rights (whether listed in the law or not), except hunting, in forest-dwellers on all forest lands, including “unclassified forests, un-demarcated forests, existing or deemed forests, protected forests, reserved forests, sanctuaries and national parks”.

The Forest (Conservation) Act 1980 creates an institutional mechanism. It prescribes procedures for the orderly approval and handing over of forest land to user agencies for diversion, de-reservation and lease for non-forestry purposes.

These possibilities result in deforestation – from “clear felling” to selective felling as required by the user agency. The Act also introduces a new land-use category that adversely affects all existing residents of a forest, whether wildlife or people, most often in the form of their complete exclusion.

The new 2022 Forest Conservation Rules affirm that “clear felling” is indeed “removal of all natural vegetation” from land of size 1 ha and above, by felling, burning or uprooting. It excludes selection, or coppice, felling.

The new Rules have come a long way from their predecessor – the 2003 Rules – and their amendments. Earlier, either the environment ministry’s regional office or the state would process all proposals to use forest land, depending on the extent of forest area to be diverted.

The environment ministry would then consider the advice of a committee set up for this purpose and decide on the proposal.

But this workflow was considered to be cumbersome and labyrinthine, and the ministry has now replaced it with a lean mean machinery – consisting of a project screening committee, an integrated regional office, a few designated officers and an advisory committee at the ministry. And the forest bureaucracy controls all of them.

The extent of the proposed area to be diverted influences the speed with which the proposal is dealt at different levels of the bureaucracy. All activities except those specified in the next line have been delegated to lower bodies for faster clearance. The ones that still need to approach the ministry’s advisory committee pertain to de-reservation, mining involving forest land of more than 5 ha, regularisation of encroachment and violation of the provisions of Forest Conservation Act. 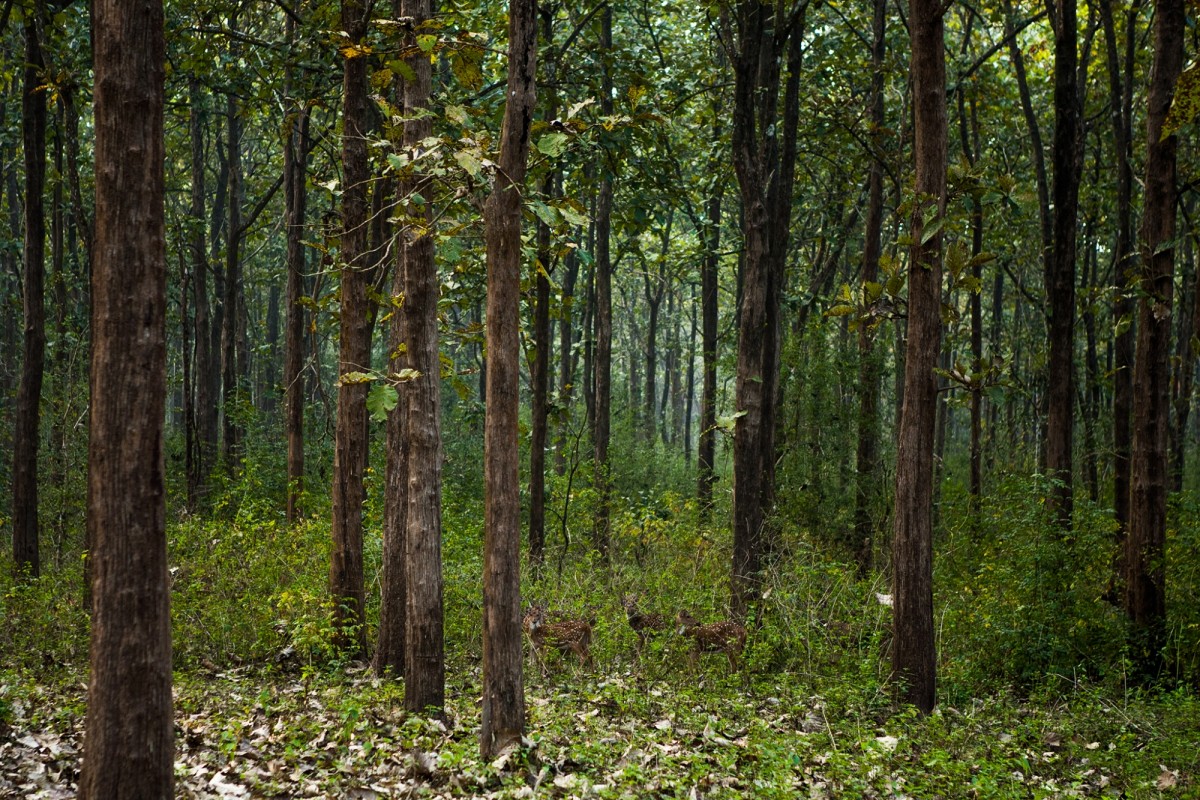 In the new Rules, tree plantation – dressed up with the label “surrogate forests” – now parades prominently under the fancy section of ‘compensatory afforestation’. Both the law and the courts have deemed that these tree lots more than sufficiently justify the takeover of forest-land – land that is invariably a part of the homes of forest-dwellers – for its wholesome destruction.

Though the Supreme Court passed an order in 2008 to revise these figures every three years, the NPV stayed where it was for 13 years between 2009 and 2022. This was despite the numerous proddings for a manifold increase in the value by officials and committees. Even the most recent revision, in January, was the result of some prodding by the expert committee set up by the Supreme Court. And even this was marginal, relatively speaking.

This is important because the improved efficiency in processing and fast-tracking together with a virtually frozen NPV rate will greatly contribute to the ‘ease of doing business’ – the new signature tune for India’s progress.

Once a proposal becomes eligible, the in-principle approval – a.k.a. stage I approval – is granted, with certain conditions. On fulfilling these conditions, and when the land for the tree lots and the NPV money for them are handed over, the state receives the final, or stage II, approval.

The state government then hands over the corresponding land to the user agency. Between 2008, when the FRA Rules were notified, and 2019, 253,179 ha of land was diverted for non-forestry purposes; another 47,500 ha or so of degraded forest lands were diverted for afforestation.

Complying with the FRA

The ministry used to receive forest diversion proposals from agencies together with a submission that forest rights under the Forest Rights Act would be attended to later. But in August 2009, and faced with a national highway blockade by Adivasi organisations, the environment ministry issued an order on how the Forest (Conservation) Act could comply with the Forest Rights Act.

Also read: UP: In the Face of Oppression, Eviction, Vantangiyas Continue Century-Old Fight for Land Rights

Specifically, the ministry mandated the completion of Forest Rights Act requirements and the gram sabha’s prior informed consent for a proposal asking to divert forest land to be eligible. The proposal was also required to be certified by the gram sabhas and by state governments, and the certification included in the proposal itself.

But soon, the environment ministry opened up another front for an assault against its own order.

In February 2013, the ministry informed all states that an inter-ministerial committee had recommended that the resolution to have gram sabhas consent to forest diversion “may not be required for projects like construction of roads, canals, laying of pipelines/optical fibres and transmission lines etc., where linear diversion of use of forest land in several villages are involved, unless recognised rights of Primitive Tribal Groups (PTG) and Pre-Agricultural Communities (PAC) are being affected”.

In January 2014, the ministry insisted that it had come to this conclusion “after consultation and concurrence of the Ministry of Tribal Affairs”. However, the tribal affairs ministry countered in a letter to all states in March 2014 that a Supreme Court judgement of April 18, 2013, held clearly that the Forest Rights Act applies to all projects – even for linear ones.

The environment ministry wasn’t done. In October 2014, it granted district collectors unilateral power to exempt Forest Rights Act compliance when a proposal pertained to forest-land in areas notified as ‘forest’ less than 75 years prior before December 13, 2005 (the cut-off date for rights that can be claimed under FRA) and with no record of a tribal population there according to the 2001 and 2011 Censuses.

(That the Act’s implementation is the only legal path to determine whether rights exist was given a go-by.)

Nine months later, in November, the environment ministry discussed exempting Forest Rights Act compliance for underground mining, as desired by the PMO. The tribal affairs ministry – now buckling under – also agreed to reexamine compliance for forest diversion. In fact, the tribal affairs ministry went so far as to agree to partner with the environment ministry on the Act when the March 2006 amendment to the Government of India (Allocation of Business) Rules 1961 allocated “all matters, including legislation, relating to the rights of forest dwelling Schedule Tribes on forest lands”, to the tribal ministry.

The Forest Conservation Rules were also tweaked in 2014 and 2017 to provide legal cover for further violations. The gram sabha certificates, on completion of Forest Rights Act implementation and consent for diversion, were replaced with the district collector’s certificate saying that these have been done. Note that the district collector also headed the district-level committee under the Act – the office that provides the final approval for forest rights claims and issues titles.

In February 2019, the environment ministry went a step ahead and said that forest diversion won’t even need to comply with the Forest Rights Act for the in-principle stage I approval. Instead, it pushed the compliance requirement to the final stage II approval. Another tribal affairs ministry rebuttal in April 2019 opposing these changes as illegal had no effect.

None of the environment ministry, the tribal affairs ministry, the state tribal department and the state-level monitoring committee (constituted under the Act) monitor compliance in forest diversion under the Forest (Conservation) Act. Nor do they comply with the Right to Fair Compensation and Transparency in Land Acquisition, Rehabilitation and Resettlement Act 2013, which requires compensation for loss of forest rights as per the Forest Rights Act.

So as such, the government’s disregard for these laws – which recognise the rights of forest-dwellers – continue unabated for the benefit of user agencies.

In the new 2022 Forest Conservation Rules, rule 6(b)(ii) states unequivocally that compliance with the Forest Rights Act is not at all required for the final approval for forest diversion, given by the environment ministry. This approval is sealed when the land for tree-lots (under compensatory afforestation) is handed over along with the NPV money.

However, the Rules also state in passing that state governments should check for Forest Rights Act compliance before they notify the user agency for physically taking over the forest land – yet this is land that the environment ministry has already handed over. So much for the farce.

The Forest Rights Act 2006 overrides the Forest (Conservation) Act 1980, and Rules can’t override or abrogate a law. For these reasons, rule 6(b)(ii) falls afoul of the law and needs to be removed. Will the Lok Sabha or the Rajya Sabha oblige?