As We ‘Beautify’ Our Country, Our Children Inherit the Results of Our Sham Green Clearances

While we may not be around to watch our children enjoy or squander what we saved, nature’s wrath will prove to be more or less instant. 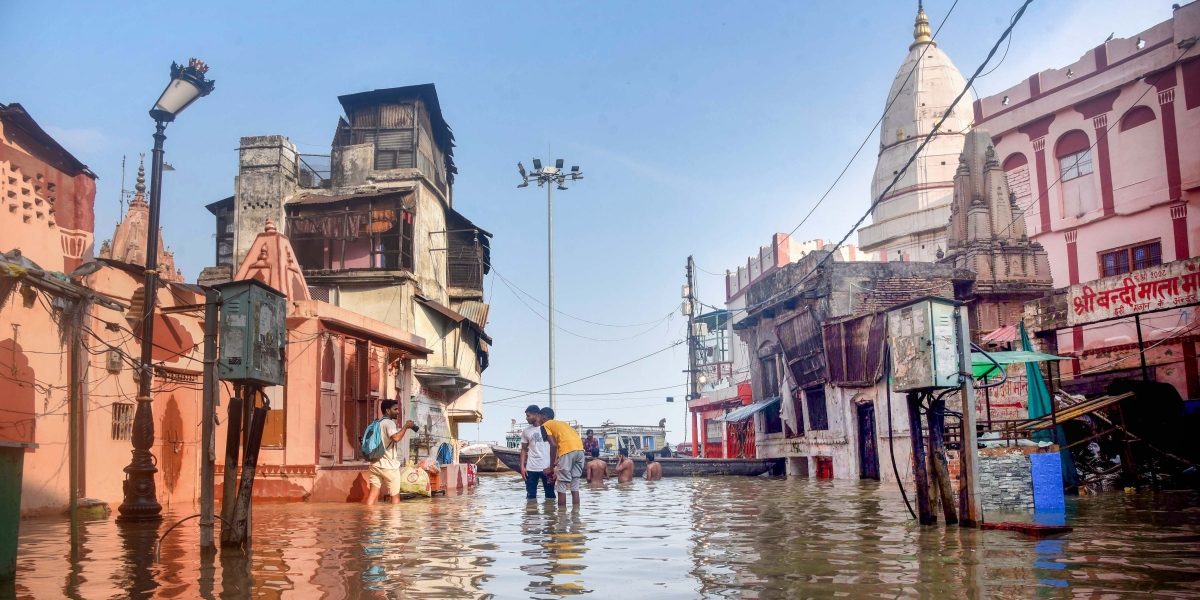 A waterlogged residential area as the water level of the Ganga river continues to stay high in the ongoing monsoon season, in Varanasi, August 27, 2022. Photo: PTI

While we all rush around buying life insurance and squirrelling away savings in fixed deposits to ensure a brighter future for our children, a nation’s wealth is being squandered away with impunity. Riverine wealth, the wealth of riverfronts and cityscapes, the wealth of pristine primaeval forests and mountains.

We may not be around to watch our children enjoy or squander what we saved but nature’s wrath will prove to be more or less instant.

While our forest dwellers stand negated as troublemaking Naxals in today’s India, as do protesting academics and people of intellect, stories are pouring in from every city and mountain of man-made natural disasters: floods in Varanasi after the recent tampering on the riverfront in the Kashi Vishwanath Corridor, ditto in Pune with its own riverfront “beautification” and “re-development” project only half complete. While Ahmedabad is now settling into almost getting used to annual flooding due to its own precursor riverfront redevelopment project inaugurated in 2012, and along which we not so long ago watched the spectacle of India’s prime minister fete the president of China. 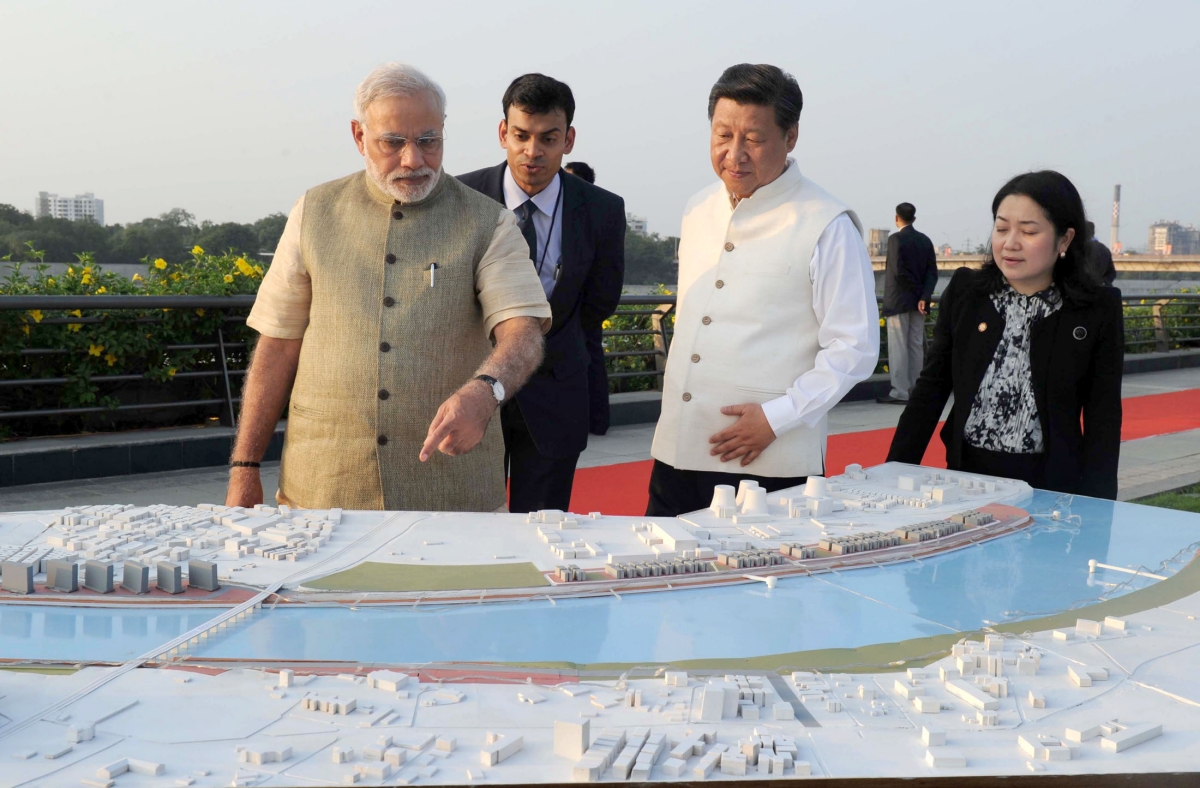 Landslides in mountainous areas in Uttaranchal have shattered us all and taken lives with their frightening intensity this year – where the fragile and unstable Himalayan terrain lies already scarred by the ongoing heavy earthwork and tampering to broaden roads for every mofussil uncle-ji to be able to access the four Panch Kedar Dhams (that hitherto only stoic and godly renunciants and sages retreated to escape the very same uncle-ji’s ancestors and their ilk, obsessed with kama and amassing dhan in their state of Arishadvarga lust).

We mango people watch in horror from the sidelines as various watchdog bodies contemplate allowing rampant mining in Assam’s Dehing Patkai forests and “development” of water aerodromes and townships in the Andaman and Nicobar Islands. We watch as the Chhattisgarh government moves to allow rampant coal mining and forest-dweller displacement in the thick forests of Hasdeo Aranya.

Among a few common threads that run through all these disasters, whether already unleashed or in the making, is a particular schema introduced in 1994 through the concept of the ‘environment impact assessment’, which was precisely to protect the nation’s natural wealth from the inevitable stupidity of human depredations and the cupidity of India’s political elites.

Originally devised to bring the weight of environmental scientists and academics to evaluate every such proposal, expectedly mostly inane ones since such is endemic to India and visible ever since Independence, whatever the current dispensation, and have the power to stop or beneficially modify disasters in the making, as things stand today that watchdog too has been co-opted like most other watchdog Institutions.

Quoting from the Centre for Science And Environment:

“The Indian experience with Environmental Impact Assessment began over 20 years back. It started in 1976-77 when the Planning Commission asked the Department of Science and Technology to examine the river-valley projects from an environmental angle. This was subsequently extended to cover those projects, which required the approval of the Public Investment Board. Till 1994, environmental clearance from the Central Government was an administrative decision and lacked legislative support.

On 27 January 1994, the Union Ministry of Environment and Forests (MEF), Government of India, under the Environmental (Protection) Act 1986, promulgated an EIA notification making Environmental Clearance (EC) mandatory for expansion or modernisation of any activity or for setting up new projects listed in Schedule 1 of the notification. Since then there have been 12 amendments made in the EIA notification of 1994.”

Each of the propositions that led to the disasters mentioned above has thus received its own stamp of approval in the form of an Expert Appraisal Committee (EAC) clearance.

And the wise Government of India has even moved to further dilute the process of such clearances, exempting many commercial activities from purview, allowing post facto clearances of existing transgressions, and removing the need for public consultations for even grossly polluting and scarring interventions into our nation’s land and water masses.

Also read: India’s National Board for Wildlife Is a Big Threat to India’s Wildlife

Elaborate environmental impact assessment studies and resultant reports have been allegedly prepared; State Pollution Control Boards and forest departments have allegedly studied their accuracy and possible impact; district collectors have allegedly held public hearings; citizens and panchayats have allegedly been given a chance to voice their concerns and misgivings; the inimitable environment ministry has allegedly studied the ‘no objection certificates’ granted at state levels; multidisciplinary expert teams have allegedly prepared environmental appraisals, after alleged site visits and consultations with affected populations; and then constituted environmental appraisal committees of alleged experts who met to ponder and pontificate; allegedly arranging further public hearings to “ensure public participation in developmental decisions” – to finally (!) accord their approvals or rejections.

That each of those tragedies received its own rubber-stamp of ministerial and expert approval is a known fact. But how one would love to now gather the experts of each of the EACs that approved the Varanasi, Ahmedabad and Pune riverfronts, or the Chhota Char Dham access roads, and confront them with the results of their allegedly intelligent and informed approvals.

Like most things in New India, it would be a joke of epic proportions if it wasn’t a tragedy of even more gargantuan dimensions. Mountainsides being blasted off and cleared to make way for the Char Dham highway. Photo: PTI

While we are quick to rush to WhatsApp to crow with undisguised pride, with an added dollop of wild imagination, about India’s ancient prowess at social organisation, science, medicine and other pathbreaking achievements, it seems to escape the collective national consciousness that as other nations of the world (sometimes even through their leaders of much-vaunted Indian descent) are now ruing the past depredations of wanton ‘development’ of the post-industrialised world and devising protocols and curbs against global weather change, environmental degradation and other ills that have now come to haunt weather as well as habitats, flora and fauna worldwide and especially apparent now in the 21st century. Yes, of course, we clever Indians are so far elevated above such mere concerns and our natural environment immune to all that man may wreak upon it.

Come, let us “develop”, “beautify”, “exploit” to our hearts content.

Just like the hapless person on the street on whom we blithely dump our garbage from our higher-floor balconies, our children and their children can deal with what we relentlessly dump on their future through the mute acceptance of sham EAC approvals.

Narayan Moorthy is merely an architect based in Delhi.