The sacking of Partha Chatterjee from the state cabinet comes a day after the ED found more stacks of cash in a flat purportedly owned by Arpita Mukherjee, considered a close associate of Chatterjee. 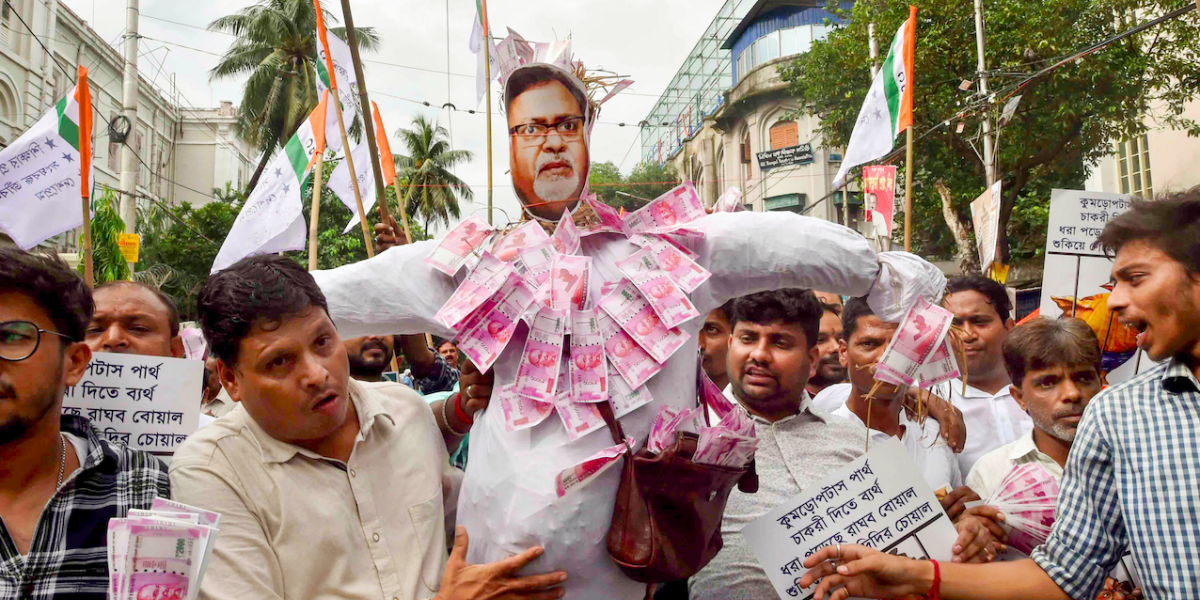 Members of Chhatra Parishad protest against West Bengal Minister Partha Chatterjee with fake notes after he was arrested by ED officials in connection with its investigation into the teacher recruitment scam case, in Kolkata, Monday, July 25, 2022. Photo: PTI

Kolkata: The West Bengal government on Thursday, July 28, removed Partha Chatterjee, who has been arrested by the Enforcement Directorate (ED) in a school jobs scam, from the ministry with immediate effect.

Chatterjee was also removed from all party posts and suspended from the Trinamool Congress. Chatterjee was TMC’s secretary general for nearly two decades. He was appointed the party’s national vice-president earlier this year. He was also a member of TMC’s national working committee and chairman of its disciplinary committee, besides being the editor of party mouthpiece Jago Bangla (Wake up, Bengal).

The sacking of Chatterjee comes a day after the ED had found more stacks of cash in a flat purportedly owned by Arpita Mukherjee, considered a close associate of Chatterjee. Chief Minister Mamata Banerjee later said at a government event here that she will look after the portfolios held by Chatterjee for the time being.

The CBI, as directed by the Calcutta high court, is looking into the alleged irregularities committed in the recruitment of Group-C and D staff as well as teachers in government-sponsored and aided schools on recommendations of the West Bengal School Service Commission. The ED is tracking the money trail in the scam.

Chatterjee was the education minister when the alleged irregularities took place.

Counting of cash continued until late at night on Wednesday, July 27. ED officials ultimately walked out with Rs 29 crore in cash and five kilograms of gold jewellery, according to NDTV.

#WATCH | West Bengal: Hugh amount of cash, amounting to at least Rs 15 Crores, recovered from the residence of Arpita Mukherjee at Belgharia.

She is a close aide of West Bengal Minister Partha Chatterjee. pic.twitter.com/7MMFsjzny1

The latest stack of unaccounted money was found five days after the agency seized more than Rs 21 crore in cash, besides jewellery and foreign exchange from another flat of Mukherjee’s, who was also arrested on July 23.

ED officials conducted raids in a total of three locations in and around Kolkata on Wednesday. Properties at Rajdanga in south Kolkata and Belgharia in the northern fringes of the city were raided. All three are linked to Mukherjee, who reportedly told ED about the properties during interrogation.

The ED, probing the money trail of the teacher recruitment scam, also grilled TMC MLA Manik Bhattacharya, a former president of the West Bengal Board of Secondary Education at its office in CGO Complex in Salt Lake area. His residence was searched by ED officials on July 22.

“We have found a good amount of money from one of the flats in a housing complex. We have brought three note counting machines to know the exact amount,” an official told PTI. Several “vital” documents were also found in the flats during a search, the official said.

Asked by PTI about the questioning of the minister and Mukherjee, the official said that though she has been “cooperative throughout,” Chatterjee is not.

Earlier, there was a demand for Chatterjee’s dismissal from the state cabinet from opposition parties.

Leader of the opposition, Bharatiya Janata Party’s Suvendu Adhikari had met Governor La Ganesan at the Raj Bhavan in Kolkata.

“I had requested the governor to remove Partha Chatterjee as a minister. He is at present in ED custody in a corruption case,” he had said.

The Communist Party of India (Marxist) led rallies in various parts of Kolkata in protest.

Fuelling speculation about Chatterjee’s future as a cabinet minister, Trinamool Congress spokesperson Kunal Ghosh said it had to be seen how the senior TMC leader would shed the tag of being “influential” without quitting as a minister of several departments.

“What he will do is up to him. He holds several portfolios as a cabinet minister. How he will shed the tag of being an influential person is for him to answer,” he had said.

The ED had described Chatterjee in the Calcutta high court as an “influential perso”n.

‘There can be mistakes’

Bengal Chief Minister Mamata Banerjee, meanwhile, had slammed the media for launching a “malicious campaign” against her party.

Banerjee had also asserted that anyone was proven guilty by the court must be punished but probe agencies must not be used to malign political parties.

“When you run a big institution, there can be mistakes. If anyone has committed any mistake, and it is proven legally, he or she must be punished. But I am against any malicious media campaign. Media is playing the role of kangaroo (court). A senior judge also said that recently,” she had said.

Chatterjee, on Wednesday, countered repeated queries by the media on whether he would resign by asking why he should do so.

Hours after Chatterjee’s arrest on July 23, TMC’s Ghosh had told reporters that the party would not remove him as a cabinet minister or from the post of the secretary general of the TMC.

Amid speculations over his political future, Chatterjee’s official car, used by him for over 15 years, was on Tuesday deposited in the West Bengal assembly.

The TMC mouthpiece Jago Bangla (‘wake up, Bengal’), of which he is the editor, has also stopped identifying him either as a minister or the party’s secretary general.

Note: This copy first published at 9:21 am on July 28 was updated and republished on the same day at 5:16 pm with the news of Partha Chatterjee’s removal from the state cabinet. It was then republished at 8:15 am on July 29 with the information that he has also been suspended from the TMC.