This is perhaps the first time any state representative has accepted that the Elgar Parishad event had no role to play in the violence. While three activists have been released on bail, and one died in custody, 12 continue to be jailed over this claim. 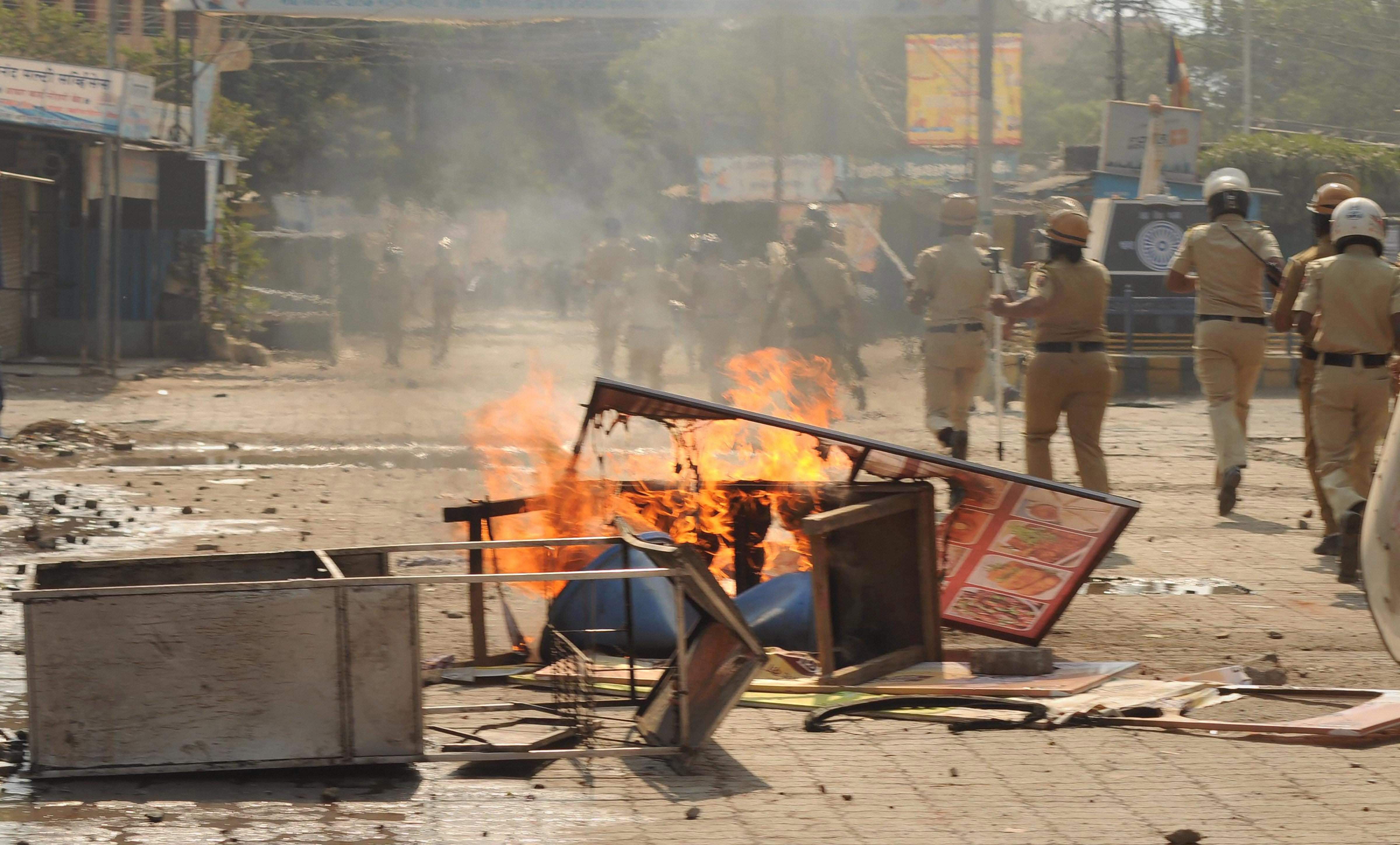 File image of police and firemen at a charred shop following the violence in Bhima Koregaon. Photo: PTI/File

Mumbai: A senior police official investigating caste violence on members of the Dalit community at Bhima Koregaon on January 1, 2018, has, on oath, admitted that the Elgar Parishad event, organised 30-kilometres away in Pune city, had no role in the violence.

This significant revelation by Sub-Divisional Police Officer Ganesh More, made before the two-member judicial commission to investigate the violence, rips to pieces the Pune police and subsequently the National Investigation Agency’s claims against the 16 human rights defenders arrested in a separate case.

The NIA claims that these 16 people played an active role in “provoking” the gathered crowd at Bhima Koregaon with their speeches and triggering violence on the 200th-anniversary celebration of the battle of Bhima Koregaon. While three persons have been released on bail, and one person died in custody, the remaining 12 continue to languish in the prisons of Mumbai.

In an ongoing deposition that began in April this year, More, who recently retired, admitted that the nine cases of atrocities – filed within his jurisdiction and investigated by him – did not show any role of the Elgar Parishad event.

The Elgar Parishad event was organised on December 31, 2017, at Shaniwar Wada, a Brahmin hub, against the casteist Brahmin Peshwa-ruled Maratha Empire.

“I did not come across any information or material to show that the incident of riots which took place on 1st January 2018, was a result of holding of Elgar Parishad on 31st December 2017 at Shaniwar Wada, Pune,” More responded to the question posed by advocate Rahul Makhare, appearing for one of the witnesses of the violence.

This is perhaps the first time any state representative has accepted that the Elgar Parishad event had no role to play in the violence.

This revelation is significant for two reasons.

While it virtually absolves those arrested in the Elgar Parishad case, it also brings the attention back to the real question: Who actually was behind the violence at Bhima Koregaon?

Makhare says, “All along we have pointed to the evidence that clearly shows the direct role of Milind Ekbote and Manohar Kulkarni alias Sambhaji Bhide in the violence. The FIRs lodged by the victims too point to their roles and those associated with their organisation working for many years in the Bhima Koregaon region. But this evidence has been suppressed by the state.”

Following the FIRs, Ekbote and Bhide, the two Brahmin extremist leaders, were booked for their direct role in provoking and unleashing violence on the Dalits. While Ekbote faced arrest for a few days in 2018, Bhide remained untouched.

Even as the victims continued to petition both the state and judiciary, the state police diverted the focus to the Elgar Parishad event and accused the organisers and some of its participants of violence. Many, who had no role in the event too were accused of inciting violence.

Just 3.5 kilometres away from Bhima Koregaon village is Vadhu Budhruk. This village well-known for its 17th-century history, of King Sambhaji’s final rites being carried out by a Dalit man Baba Govind Gopal Gaikwad when others failed to come forward fearing a backlash from Mughal emperor Aurangzeb. The villagers here accuse Bhide and Ekbote of vitiating the atmosphere and saffronising Gaikwad’s legacy.

Even as the Ambedkarite crowd had gathered at Bhima Koregaon, Bhide’s men – carrying saffron flags – had gathered in the village and recited a “prerana mantra” or inspirational slogan penned by Bhide, inciting “Hindus to pick weapons against those challenging their belief”.  This, the villagers claim, was done to incite the dominant caste, especially the Marathas, against Dalits. However, when More was asked about the content of the poem and the intention behind its recital, he told the commission that he “couldn’t tell if the content was offensive”.

The two-member judicial commission – headed by former Calcutta high court Chief Justice J.N. Patel with former Maharashtra chief secretary Sumit Mullick as a member – began its hearing in early 2018. Since then, the commission has sought many extensions and has been organising regular hearings in Pune and Mumbai. Along with the victims, the state machinery including the police and intelligence unit have submitted their affidavits.

Another witness Ravindra Sengaonkar, an IPS-rank officer who retired recently and was the additional commissioner (south region) of Pune City Police at the time of the violence, was examined over the past few weeks before the commission. Sengaokar, when asked about the nature of the speeches made at the Elgar Parishad event on December 31, 2017, says, that the speeches were provocative and attracted action against the speakers, especially students’ rights activists Umar Khalid and Dontha Prashanth, Gujarat’s Congress MLA Jignesh Mevani and journalist and anti-caste activist Sudhir Dhawale (already arrested in the case).

Sengaokar claims that the nature of the speech was provocative and that this was known immediately after it was made. But he admitted that the police had not “immediately registered an FIR”.

This admission by Sengaokar is again crucial since the defence lawyers in the Elgar Parishad case have all along maintained that the case registered against rights activists was an “afterthought” and done only with the intention to falsely implicate human rights defenders.

Teltumbde, Bharadwaj and Rao are out on bail, but Swamy died last year allegedly due to the state’s negligence and failure to provide him with adequate medical care.

Senior lawyer Mihir Desai representing many of the arrested accused in the Elgar Parishad case calls these revelations by police officials “significant”.

“While the evidence furnished before the commission can’t be automatically used in the trial court, this admission by a senior police officer surely bolsters the defence’s case and we will find a way to examine the office later at the time of the trial,” Desai told The Wire.

Another defence advocate Nihalsing Rathod says the commission should send More’s deposition immediately to the Bombay high court inviting its cognisance. “This admission by a senior police officer who was privy to investigation at the relevant times strikes at the root of the Elgar matter. Based on such baseless allegations 16 people were sent to jail; one had to lose his life rotting in jail. Such testimony must be noted and acted upon by the high court,” Rathod added.

The close to 25 FIRs registered by the victims in the aftermath of the caste violence all name the right-wing forces, mainly associated with Ekbote’s Samasta Hindu Aghadi and Bhide’s Shivpratishthan Hindustan. It is pertinent to mention that in none of these cases, the victims have accused Elgar Parishad of inciting violence.

Among the pending witnesses to be examined before the commission are IPS officers Rashmi Shukla, Shivaji Pawar and Suvez Haque. These officers have been involved in managing the riot and later investigating the cases of violence. Pawar was an investigating officer of the Elgar Parishad case until January 2020, when the case was handed over to the NIA. They are expected to depose before the commission in Mumbai towards the end of next month.