Election Commission Says It Is Time to Explore Remote Voting

The poll body is also considering a "name and shame" policy to encourage government employees who avail leaves but do not vote, according to sources. 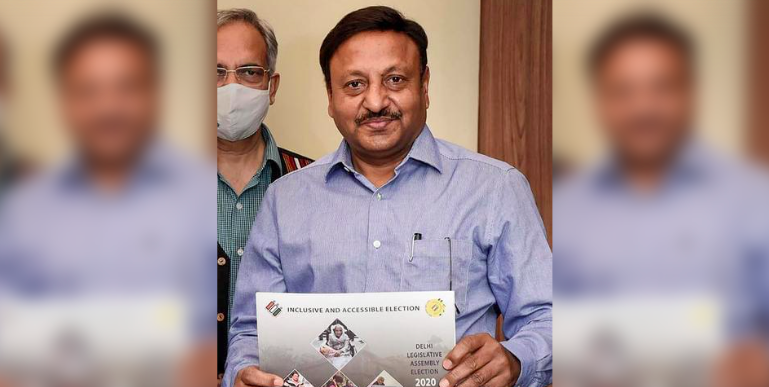 In this March 18, 2021 file photo Election Commissioner Rajiv Kumar, who was appointed as the next chief election commissioner on Thursday, May 12, 2022. Photo: PTI

New Delhi: The Election Commission (EC) on Tuesday said that a committee will be set up to examine the issues of migrant voters, including exploring possibilities of remote voting after consultations with all stakeholders including political parties and electors.

Besides, to address voting apathy in urban areas, all Union and state government departments, central and state PSUs and corporate entities with 500 plus employees will be asked to appoint a nodal officer to ascertain ‘leave availing but non-voting employees’.

Special voter education and electoral participation awareness sessions would be held for such non-voting members of these organisations, the poll panel said, while noting that under the Negotiable Instruments Act, the polling day is declared as a holiday for all workplaces with the primary purpose of facilitating voting by the employees.

A meeting of the EC noted with concern the abysmally low voter turnout in some of the metropolitan/city areas despite the fact that polling stations are set up within 2 km of any voter in urban areas.

“It is kind of name and shame as people in poll going areas get a day’s off under the Negotiable Instruments Act with the primary purpose of facilitating voting by employees,” explained a senior functionary.

Announcing decisions taken at the meeting held earlier in the day, the panel said, “Voters migrate from the place of their registration to cities and other places for education, employment and other purposes. It becomes difficult for them to return to their registered polling stations to cast their vote.”

“The Commission felt that time has come to explore possibilities of remote voting, maybe on a pilot basis. A committee would be set up to examine the issues of migrant voters. Given the fact that voters and political parties are the primary stakeholders, the wider consultation with all stakeholders including political parties would be started thereafter.”

Days after chief election commissioner Rajiv Kumar undertook an hours-long trek to a remote polling station in Uttarakhand, the poll panel also decided to double the remuneration of polling officials going to such booths as early as three days before voting day.

It was also decided to develop special water and shockproof, extra protective backpacks or cases to carry EVM-VVPATs and safeguard the machines provided to all such teams to aid hands-free movement in difficult terrain.

“Empathising with the dedication of polling personnel who perform election duty in remote and difficult areas, the Commission decided to double the remuneration of the polling officials going to the polling Stations three days in advance. Till now, the remuneration for polling officials used to be a uniform per diem amount for all alike. Chief electoral officers of the states and UTs shall specifically notify such polling stations for enhanced remuneration during an election,” an EC statement said.

This is the third major decision taken by the EC in the last three weeks after Kumar took over as the CEC. The first one was related to personal austerity, with commissioners giving up certain facilities. The second decision tightened the noose around recognised unregistered political parties flouting rules. “Today’s decision covers voters, parties and polling personnel,” a functionary said.

The Commission noted that the EVM-VVPAT machines have been technologically designed to get triggered in unauthorised access mode’ whenever there is an unauthorised attempt to open it and become unusable because of the one-time programmable chip.

The Commission decided to develop special water and shockproof, extra protective backpacks or cases to carry EVM-VVPATs and safeguard the machines provided to all such teams to aid hands-free movement in difficult terrain.

A few years ago, the EC collaborated with IIT-Madras to work on a new technology which will allow electors to vote from faraway cities without going to the designated polling stations of their constituencies.

Explaining the ‘blockchain’ technology involved in the project, then senior deputy election commissioner Sandeep Saxena had earlier said the concept is a “two-way electronic voting system in a controlled environment on white-listed IP devices on dedicated Internet lines enabled with biometric devices and a web camera”.

Saxena, however, made it clear that voters will have to reach a designated venue during a pre-decided period of time to be able to use this facility.