Why Has the EC Brought Back the Dangerous Proposal to Link Voter IDs With Aadhaar?

Despite the ECI's enquiries and reassurances, there is a fairly widespread impression that the attempted linking of electoral roll data with Aadhaar may have resulted in the disenfranchisement of legitimate voters. 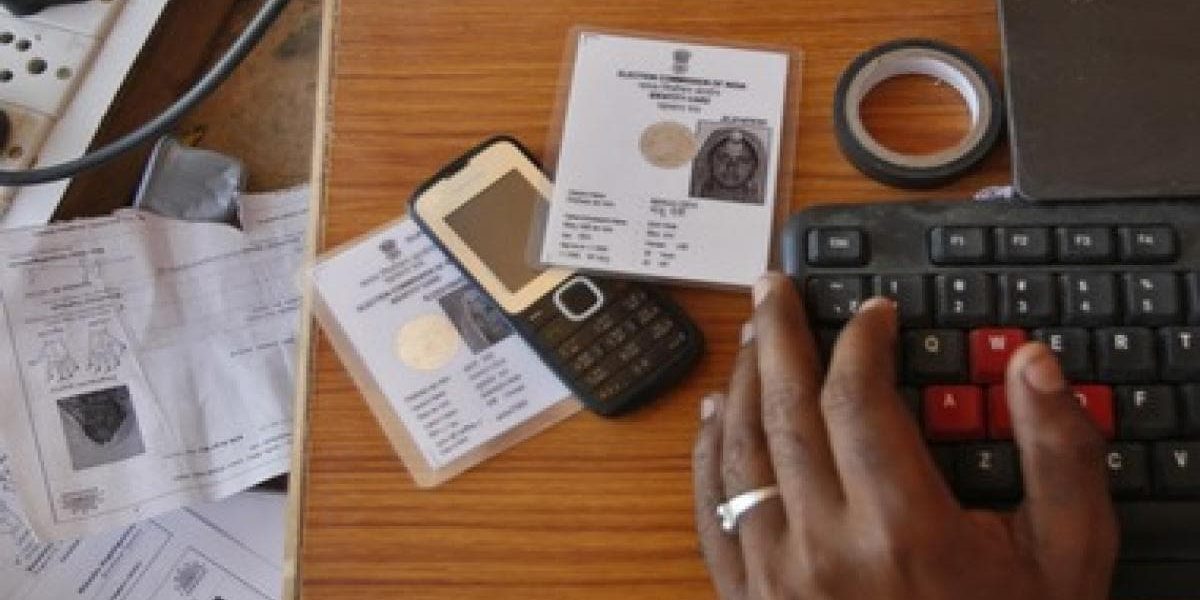 An operator works on his table while enrolling villagers for the Unique Identification (UID) database system for Aadhaar. Photo: Reuters/Files

After a gap of six years, the dubious linkage between voters IDs with Aadhaar numbers is back in the news.

It was reported on June 8 that the chief election commissioner had written to the Union law minister requesting the minister to expedite a long list of proposals for electoral reforms. Linking of voter ID information with the Aadhaar database of the UIDAI was one of the prominent proposals.

The Election Commission of India (ECI) taking up this proposal once again was a surprise. It is not a new proposal. The first attempt was made in March 2015 when the Election Commission of India (ECI) launched “a comprehensive programme”, called the National Electoral Roll Purification and Authentication Programme (NERPAP) “with the prime objective of bringing a totally error-free and authenticated electoral roll”. One of the objectives of the NERPAP was to link and authenticate the EPIC (Electoral Photo Identity Card) data with the UIDAI’s Aadhaar data.

This had to be stopped because on August 11, 2015, the Supreme Court passed an interim order prohibiting Aadhaar from being used for “any purpose” other than the state-facilitated distribution of food grain and cooking fuel such as kerosene and LPG. The ECI decided to stop the drive by its order of August 13, 2015.

Despite the immediate suspension, the damage had already been done: “(N)early 55 lakh voters … were left out of the electoral process due to the linkage of electoral photo identity card (EPIC) and Aadhaar taken up by the Election Commission in 2015.”

To understand the keenness of the ECI to re-introduce this, we have to go into some history.

Former chief election commissioner H.S. Brahma is reported to have said that the work on this initiative started in 2012. Two former chief election commissioners (CECs) have been quoted as saying, on the condition of anonymity, that the UIDAI had lobbied long and hard to link voter IDs and Aadhaar as a way to legitimise the controversial biometric ID project. They said while they agreed in principle to integrate Aadhaar with electoral rolls to eliminate duplicates; “the Commission held the view that we should hold off until we fully understand the implications,” said one of these former CECs.

One of the CECs also said that linkage of voter cards with Aadhaar numbers was agreed to during a meeting with Nandan Nilekani but nothing of significance was done till H.S. Brahma took over as CEC on January 16, 2015 (his tenure lasted till April 18, 2015). It has also been reported that Brahma “made it a priority to push through the seeding process”.

Also read: Who Are the Forces Shaping India’s Data Push in Healthcare?

The ECI, the UIDAI and the government have been quite vociferous and aggressive in defending, and promoting, the proposed linkage. They have given four broad reasons in support of the linkage:

The government has already passed an amendment in the Lok Sabha to allow NRIs to participate in elections via proxies.

All four of the above reasons are doubtful and debatable, with a lot of ifs and buts.

So far as “improving the accuracy of the electoral rolls, by weeding out duplication and misrepresentation in electoral rolls” is concerned, given that the reliability of Aadhaar itself is under a cloud, it is hard to understand the ECI’s faith in it.

Doubts over the efficacy and intent of the NERPAP drive resurfaced in early 2018 with the discovery of missing voters in some states, starting with Karnataka, where some 6.6 million voter names, of a total of 50 million, had gone missing. Also, NERPAP data sheets were found “lying around” in several locations because at least some of the personnel tasked with collecting the data had continued to do so for quite some time after the August 2015 Supreme Court ban kicked in. This was because follow-up instructions from the ECI took time to reach the ground level. Even after the data-collection drive had finally stopped, in the absence of clear instructions on how to store and/or dispose of data sheets, they were apparently put away quite haphazardly, by the ground personnel. This only served to further underline doubts over how the linking exercise might have led to the deletion of voter names.

Despite the ECI’s enquiries and reassurances, there is a fairly widespread impression that the attempted linking of electoral roll data with Aadhaar may have resulted in the disenfranchisement of legitimate voters. It has also been suggested that some of these deletions are systematic bids to deprive specific groups of their voting rights.

Not everyone whose name was deleted due to infirmities in the Aadhaar ecosystem – which are by now well-known – will or can approach the ECI for re-enrolment. Given that deprived sections of society are usually the worst hit by such exclusion, many won’t have the wherewithal to do so.

There have also been reports that the ECI has been cagey about revealing information on the linking process and what transpired between the rollout in March 2015 and the Supreme Court ban in August the same year. In response to RTI applications, it cited “non-availability of information in ‘physical form’ in the ‘records of the Commission'”. This kind of deflectionary legalese does not inspire trust and credibility.

Despite all the rhetoric, the ECI’s plans “to implement advanced mechanisms such as electronic and internet-based voting”, remain a flight of fancy. There are those who continue to express doubts over Electronic Voting Machines (EVMs) and Voter Verifiable Paper Audit Trail (VVPAT) machines.

While there has been a lot of talk about “giving ‘remote’ voting rights to domestic migrants” particularly in the wake of the humongous migrants’ crisis in the wake of the COVID-19 lockdown, the ECI and the government have paid scant attention to migrants within India — let’s call them MRIs, Migrant Resident Indians — whereas they seem to bending over backwards to accommodate the wishes of the well-heeled NRIs.

In addition, the proposed linkage has serious legal and constitutional issues. It will violate the judgment of the Supreme Court of India in Justice K.S. Puttaswamy (retd.) & Anr. v. Union Of India, popularly called the Aadhaar judgment.

The problems faced by lay people in trying to use Aadhaar are widely known. Fingerprints and even the iris not matching are widespread. Also, the assumption that linking the Aadhaar database with the voter ID/EPIC database will enhance the authenticity of the voter ID data, is on extremely slippery ground given widespread data quality issues in the Aadhaar database. On the contrary, this might even dilute the sanctity of records in the voter ID database. Data quality issues in the Aadhaar database – a result of inadequate enrolment practices and lack of effective correction mechanisms – have been extensively documented. The UIDAI has itself admitted so before various courts, and multiple courts have refused to accept Aadhaar as proof of birth or identification. This actually has the potential of increasing voter fraud.

And finally, one can do no better than quote Justice B.N. Srikrishna (retired), who chaired the expert committee that drafted India’s Personal Data Protection Bill. He described the Election Commission’s request for a law to link electoral rolls with Aadhaar as “the most dangerous situation” on August 24, 2019.

The real reason why the ECI has “approached” the law ministry is to bypass the Supreme Court judgment. This is why “While approving the ECI’s proposal, the Union Law Ministry headed by Ravi Shankar Prasad has categorically asked the ECI to enumerate the measures that the poll watchdog is adopting to safeguard data from being hijacked, intercepted and stolen, as per the report”.

The report goes on to say, “In its reply, the ECI had sent the list of safeguard measures to the Union Law Ministry in December. The ECI mentioned that these measures are for both application and infrastructure levels. The ECI has also mentioned that the Aadhaar ecosystem is not entered into by the electoral roll database.”

Further, to remove any remaining doubts, and thereby letting the cat out of the bag, the ministry clarified, “Responding to the ECI’s letter of request, the Union Law Ministry stated in September that the ECI’s rationale would ‘pass the benchmark test laid down by the Hon Supreme Court for collecting Aadhaar details for purposes other than getting benefits of state-sponsored schemes.’”

It is sad that an apparently legally elected government should resort to such poorly disguised legal subterfuges to circumvent the directions of the highest court in the land. This is a proposal that should be dropped once and for all.

Jagdeep S. Chhokar is former professor, dean and director in-charge of Indian Institute of Management, Ahmedabad (IIM-A), and a founder-member of Association for Democratic Reforms (ADR). Views are personal.