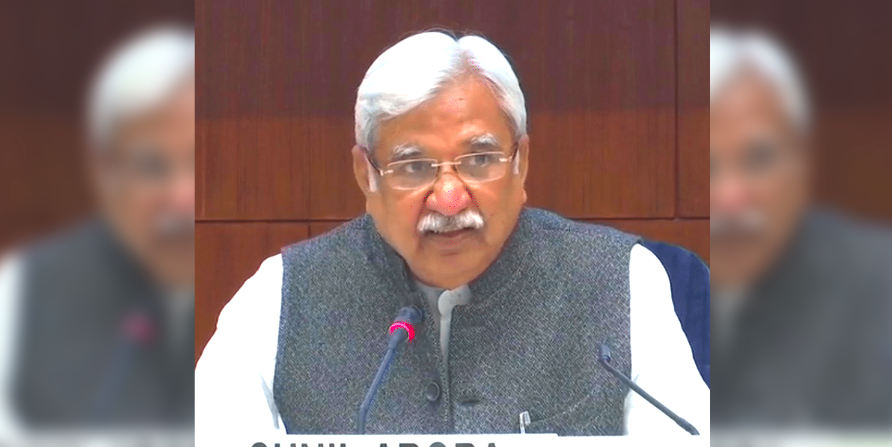 New Delhi: The Election Commission, in an afternoon press conference, announced the schedule for assembly polls in Tamil Nadu, Assam, Kerala, West Bengal and Puducherry. While West Bengal will see polls in eight phases, Assam will see a three-phase election. All other states and the Union Territory will have the election on a single day, on April 6.

Counting for all states and the UT will take place on May 2.

Chief Election Commissioner (CEC) Sunil Arora – in his last press conference before remitting office on April 13 – said a total of 824 assembly constituencies will be going to polls, with an electorate of well over 18.68 crores. As many as 2.7 polling stations will be set up.

The Model Code of Conduct will come into force from today, the CEC announced.

The polling dates for the phase-wise election are:

Tamil Nadu has an AIADMK government whose term will expire on May 24, while Kerala and West Bengal are ruled by the Left and Trinamool Congress respectively. Assam is the lone state among the four to have a Bharatiya Janata Party government.

In Puducherry, President’s Rule has been imposed and the assembly kept under suspended animation after the V Narayanasamy-led Congress government resigned earlier this week ahead of a vote of confidence. The assembly in the Union Territory has 30 seats.

The CEC cited the example of last year’s Rajya Sabha election in June, and then the Bihar assembly elections which saw an electorate of 7.3 crore and saw a turnout of 57.34%.

The CEC said its officials visited all states and Union Territories for meetings before fixing the dates. In addition to the dates, the CEC announced several measures necessitated by concerns over security and the pandemic.

Each polling station will have no more than 1,000  voters and will be on the ground floor. All four states and the UT will see a significant rise in polling stations considering COVID-19 regulations.

All poll workers will be vaccinated for COVID-19 before the elections.

Postal ballot facilities will be extended as an option to senior citizens, the CEC said. Nodal health officers will be appointed and a separate SOP will be followed for COVID-19 suspected people.

Polling time will be extended by one hour in view of health requirements, as it was done in Bihar.

While roadshows will be allowed, door-to-door campaigns will be limited to five people. Candidates can file nominations online and offline both.

Drinking water, soaps and masks will be available at each polling station. Volunteers will be present at each station to assist the elderly.

Candidates with criminal antecedents and their political parties will need to advertise their antecedents and why they were selected a number of times during the campaign period.