The worker was allegedly tortured and murdered after he allegedly tried to steal a few kilograms of cashew from the processing unit owned by Cuddalore MP T.R.V.S. Ramesh. 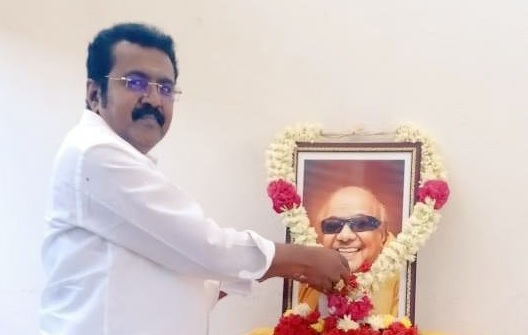 New Delhi: DMK’s Cuddalore MP T.R.V.S. Ramesh is likely to be questioned by the CB-CID on Wednesday in the alleged murder of a factory worker. Ramesh had surrendered on Monday before a judicial magistrate court, after five of his aides were arrested in the case.

The worker was allegedly tortured and murdered after he allegedly tried to steal a few kilograms of cashew from the processing unit.

On Monday, the 50-year old MP had appeared before a judicial magistrate court in Panruti, about 25 kilometres from Cuddalore, and he was remanded to judicial custody until Wednesday. Later, he was lodged in a sub-jail in the district.

Ramesh was named in an FIR in the alleged murder of Govindarasu, an employee in his cashew unit off Panruti in Cuddalore district. The MP has been booked under various sections of the Indian Penal Code (IPC), including murder, wrongful restraint and conspiracy and for causing disappearance of evidence and CB-CID is probing the case.

The killed worker Govindarasu is an office-bearer of the Paattali Makkal Katchi (PMK), which is part of the NDA. He had been working in the cashew unit owned by Ramesh for the past about seven years.

An official told Indian Express, “[Govindarasu] was caught by the security guards with the cashewnuts while he was leaving for home. But there is no complaint or evidence of theft against Govindarasu at the local police station,” said an official.

Another officer told the newspaper that the investigation is yet to ascertain if Ramesh was present while the worker was allegedly tortured and murdered.

The Indian Express report says that the victim’s son, a daily-wage labourer in Chennai, had filed the complaint which named Ramesh and his aides. “The initial information was that his father consumed poison, but there were injuries on the body and the son filed a complaint of unnatural death. Ramesh’s name was specifically mentioned in the complaint,” a police officer said.

The cashew nut unit management had claimed that “Govindarasu died by suicide”. The police probed it as a “death under suspicious circumstances”. Later, the case was taken up by the CB-CID and the issue was taken up in the Madras high court.

PMK founder leader Ramadoss had alleged that if Ramesh was not arrested, he would tamper with the evidence and urged the CB-CID to immediately arrest him.

Ahead of his surrender, Ramesh said he would legally prove that the accusation levelled against him was baseless.

He said he was anguished about false propaganda against his party by “some political parties due to political vendetta,” which was based on an FIR against him.

The MP, in a statement, said he was surrendering before the court so as to not give room to those who wanted to hurl accusations at his party-led regime, steered by DMK president and chief minister M.K. Stalin, who is providing good governance.