Whether it is CAA-NRC, the farm laws or the Agnipath scheme, it appears that the Modi government has two strategies: disruption of normal life and creating dissonance among the people. 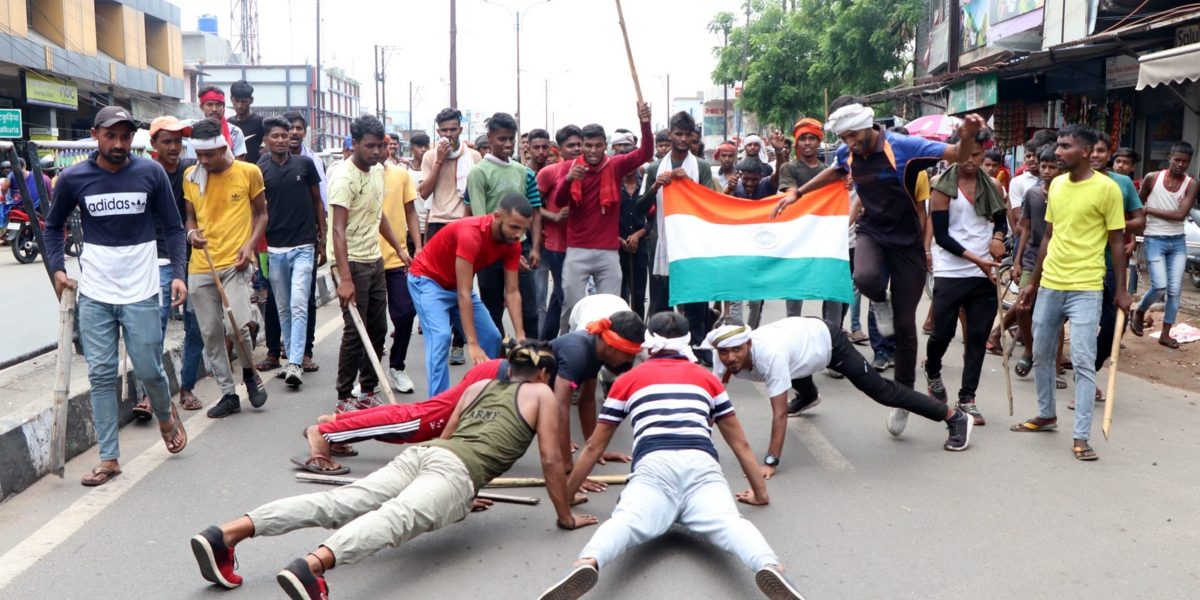 The intent is to disrupt. Disruption and dissonance are the two main objectives and also the strategy of this government. Disruption of normal life and creating dissonance among the people.

All ‘policies’ of this government have caused chaos and disharmony. This time too, the leader has succeeded in doing that through the Agnipath scheme. Normal life, if ever it was that, has been severely disrupted in many parts of the country. Minds of lakhs of the youth of India are agitated and they are venting out their anger but there is a section of society which fails to connect with them. The angrier they look, the more alienated they get from others. So, there is utter confusion in society. And this is exactly what the government had intended.

That is why I have a suspicion that the government knew that its decision to go for short-term recruitment for the armed forces would upset the youngsters waiting to get into these services. It knew that those preparing for these jobs for the last several years were bound to take to the streets when they found that the first announcement of recruitment was not for a regular job but for short-term employment. To say that this government acts first and thinks later is to misunderstand the way it functions.

There is a section which laments that the government has failed to communicate with the people who will be affected by the scheme. They plead with the leader to ensure clear communication with the youth to enable them to follow him. The intent is noble, as it was in the enactment of the farm laws which were revolutionary but could not be implemented as the government failed to “prepare the ground” for them.

This problem of communication has been cited again and again in the last eight years which makes it impossible for the people to be in sync with the vision of the leader. Have these pundits ever thought about the fallacy of this argument as they themselves have been claiming, not entirely incorrectly, that the leader is also a communicator par excellence? We have been told again and again that he is an ace communicator, that he strikes the right chord in the hearts of people and that explains his tightening grip over the voters.

If there is one big quality that separates him from other leaders, it is his communication prowess, the experts claim. Then why doesn’t he care to deploy these skills to gain the assent of the people for his policies, persuade them to agree to his steps which are supposed to be ‘life changing for them and the nation’? Starting with the land acquisition Bill to this Agnipath move, why have the people always risen in protest to reject the moves by the government? Why do they not trust its claim that these policies are aimed at doing good for them?

The farmers rejected his land acquisition Bill but the government persisted with it. When it found that the numbers in the Rajya Sabha would not allow it to take the shape of law, it had to backtrack. Prime Minister Narendra Modi, the master communicator, taking back the Bill said:

“But I saw how the farmers were being misled and a fear psychosis created. My dear farmers, you should not be misled and definitely never be scared. And I do not wish to give anyone the opportunity to mislead you and scare you. For me, every single voice in the nation is important but most important to me is the voice of the farmer. We had issued an ordinance. Tomorrow, on August 31st the deadline for this ordinance ends. I have decided that let this ordinance be lapsed.”

In other words, he accepted that he or his government could not communicate to the farmers the benefits of the proposed Act. Those who allegedly misled the farmers proved to be better communicators than him.

In the case of the three farm laws too, the prime minister had to accept that the farmers were “misled and misinformed” by some vested interests. There again, he failed as a communicator.

Also read: What Will Narendra Modi’s Legacy as Prime Minister Be?

The leader also failed to convince Muslims that the Citizenship (Amendment) Act (CAA) was not aimed at excluding them from the definition of Indian citizenship and the process of the National Register of Citizenship was also not to weed out Muslims. But his real constituents understood what it meant.

Muslim women did not believe him when he said that the law criminalising Muslim men resorting to ‘triple talaq’ was to “liberate” them. They understood that the intent was to humiliate their men.

The media has to resolve this paradox. If he is an unparalleled communicator, how does Prime Minister Modi fail to convey the potential of his policy measures to people who stand to benefit? If he manages to make it work in elections and gather votes, then can it be the case that in governance too he is achieving what he intends? He intends to create disruption and dissonance and he succeeds on each occasion.

Thus the harmony of society is broken. One section fails to connect with the other. This is happening possibly for the first time in India that a public has emerged which thinks that it is its duty to act as the loudspeaker of the government and help it discipline the disgruntled. For the first time, we started hearing chants like “Modi ji tum lattha bajaao, ham tumhaare saath hain.” A section of the population wants the government to do violence against other sections of the society. And is ready to participate in it.

Demonetisation devastated the lives of millions but there was absolutely no sympathy for them among a large section of the population. The move produced suspicion and envy towards each other. People started enjoying the misery of their fellow beings. The long queues before the banks brought taunts to those who complained: “If jawans can stand for 10 hours at the border, can’t you stand in the ATM queue for 1 hour?”

Similarly, the introduction of the goods and services tax (GST) proved to be a nightmare for small businesses. They are still struggling to survive and stand on their feet after demonetisation and GST. But there is an absolute lack of awareness of their troubles in other sections of the society, leave alone sympathy for them.

The CAA similarly divided India vertically into two parts. One part just could not understand the feeling of alienation that the move had produced in the other part. The proposed NRC has generated fear in one community while the community fails to acknowledge the basis of this fear. Even after the horror that the NRC proved to be for the people of Assam, there is a vocal section even in Assam which wants to repeat that process, that has ruined the lives of lakhs in Assam.

The farm laws were opposed by farmers but the majority of non-farmers were made to believe that the farmers, for their selfish narrow short-term gains, wanted to obstruct reforms which were for the welfare of the nation. This vocal section blamed the obstinacy of the farmers for the withdrawal of the laws.

It is being repeated in the case of the Agnipath scheme. The despairing youngsters, finding no ear for their grievances, are resorting to protests.

This is what this government has been doing all these years – constantly disrupting life in all aspects and producing divisions among the masses. The Indian society is defined mainly by suspicion, envy, contempt for the ‘other’. Other as we define it for ourselves.

This disruption is very useful. It keeps the minds of people in a constant state of confusion and insecurity. An agitated mind can hardly think coherently. So the common Indian mind is a confused mind. There is no common ground on which all Indians can stand. A large part of the population has so decisively identified itself with the regime that any criticism of the regime is seen by it as an affront to itself.

Needless to say, this disruption, confusion and chaos is a blessing for the regime. It produces this state and then offers itself as the rescuer. It further tightens its grip on the people.

The latest Agnipath move will widen the divide in the society and confuse it even more. It is the job of the intellectuals to talk honestly to the people, to say what they know and speak openly. They have to articulate what the people have been doing with their wisdom. The farmers, the labour, Muslims, Adivasis and the youth! The most urgent job is to create a common ground of understanding which will be the beginning of the making of one Indian people.