As video of another attack on cops at Saket courts surfaced, cops and family members protest at Police HQ. 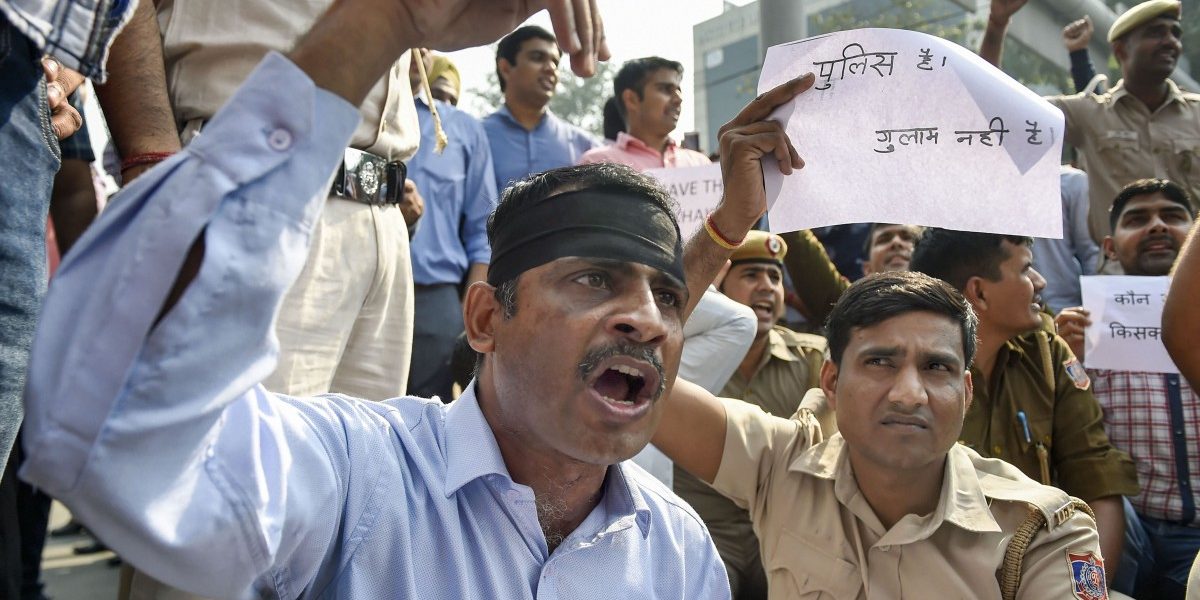 Delhi police protest after a clash with lawyers. Photo: PTI

New Delhi: A large number of Delhi police personnel and their family members on Tuesday held an unprecedented protest demonstration outside the Police Headquarters at ITO to seek stern action against lawyers who attacked and assaulted police officers and vandalised 17 police vehicles at the Tis Hazari courts complex on November 2.

The personnel ended their nearly 11-hour-long protest after assurance by senior officers that their grievances will be addressed.

Special Commissioner of Police (Crime) Satish Golcha urged protesters to end stir and resume their duty, while assuring them that a review petition will be filed against the Delhi high court order in connection with a clash between police and lawyers at the Tis Hazari Courts Complex.

The senior officer said the injured policemen will get an ex-gratia payment of at least Rs 25,000.

Their decision to end the protest also followed a review of the situation by the Lieutenant Governor Anil Baijal in which he said it was essential that the trust between lawyers and police was restored and justice was done impartially. He also assured that no injustice will be allowed to be done to any member of the force.

In the evening, police personnel also lit candles to highlight their demands. Among other things, they have demanded stringent punishment and cancellation of licences of the lawyers involved in the attacks.

The protesting cops also charged that while action has been initiated against police officers without any probe, corresponding action has not been taken against the lawyers. They also accused their own senior officers of remaining silent on the issue, even as the high court suspended two personnel and transferred two senior officers in connection with the violence.

Holding aloft banners which read “How’s the josh? ….. Low Sir”, “We are also human – Right to Equal Justice, Right to be Heard” and “Where is our chief, who cares for us”, the protesting police officers raised slogans demanding that their grievance too about being allegedly attacked by lawyers be heard.

#WATCH Delhi Police personnel raise slogans of “Humara CP (Commissioner of Police) kaisa ho, Kiran Bedi jaisa ho” outside the Police Head Quarters (PHQ) in ITO. They are protesting against the clash that broke out between police & lawyers at Tis Hazari Court on 2nd November. pic.twitter.com/f4Cs7kx9Dr

As the media had begun telecasting the protest live, the number of protestors grew. Initially, several senior districts officers tried to pacify the protestors, but eventually they showed no signs of relenting and demanded that the decision to suspend two officers and transfer two others be reversed.

‘Have faith, justice will be done’

Thereafter police commissioner Amulya Patnaik addressed the protesting cops and urged them to resume their duty. “We have to behave like a disciplined police force,” he said, urging them to have faith that justice will be done.

Patnaik also told the cops that a probe has been instituted by the high court. “These are testing times (for the police), there are expectations (from the police) and there should be patience,” he said.

The commissioner also urged them not to generalise isolated incidents and promised “legal action” against people responsible for Monday’s assault on policemen. The Delhi police on Tuesday also submitted a report to the Union Ministry of Home Affairs on the clash.

Meanwhile, the Bar Council of India, which initially demanded action against cops, has now assured that the guilty lawyers would be identified and proceeded against. 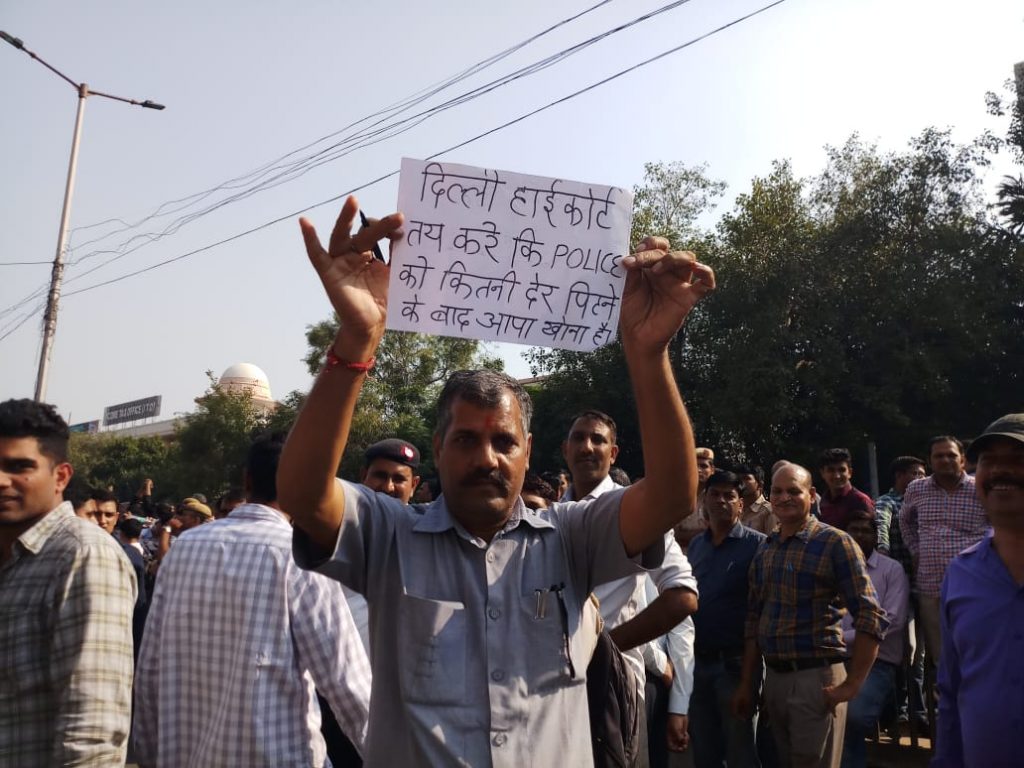 At least 20 police personnel, including an additional deputy commissioner and two station house officers, and a number of advocates were seriously injured in the clash. The police and lawyers got into a physical fight following an argument between a lawyer and police personnel over parking of the former’s vehicle near the alighting point for prisoners at the courts complex. Both the sides had accused the other of resorting to disproportionate use of force in the assault. One lawyer was also admitted to hospital with a bullet injury.

Following the incident, four First Information Reports were registered on the basis of complaints filed by the lawyers and police personnel. A Special Investigation Team (SIT) was also formed to probe the clash. 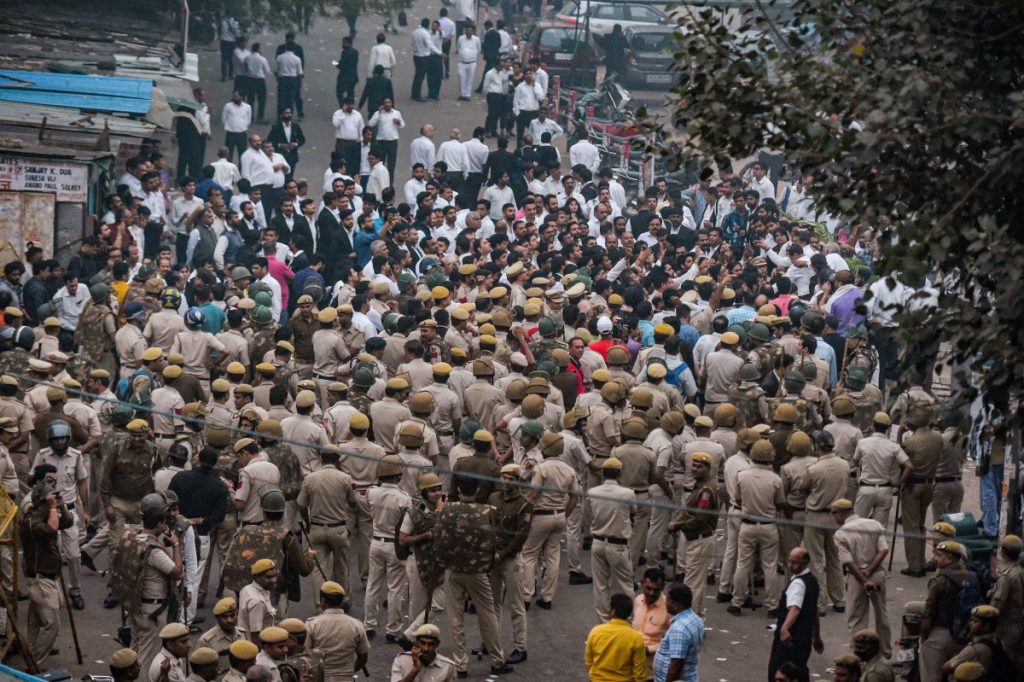 The Delhi HC had taken suo motu cognisance of the incident. During a hearing on Sunday, a bench comprising Chief Justice D.N. Patel and Justice C. Hari Shankar directed the suspension of assistant sub-inspector Pawan Kumar, who allegedly shot at the lawyer, and ASI Kanta Prasad, who allegedly dragged a lawyer to a police lock-up. Another officer, additional DCP Harinder Singh, who reportedly gave the order to open fire, and special commissioner of police Sanjay Singh, who ordered a cane charge, were ordered transferred.

The high court bench also said a probe would be conducted by retired judge S.P. Garg into the incident and directors of the Central Bureau of Investigation, Intelligence Bureau and Vigilance Department would assist him.

Meanwhile, the Bar Council had also taken the stand that only the police personnel were at fault. It also declared a strike on Monday against the “brutal police action”. Its chairman, Manan Kumar Mishra, also urged Lieutenant Governor Anil Baijal to immediately arrest the guilty cops.

Another cop attacked at Saket court on Monday

It is very unusual for members of the police force to hold a protest, who are not even allowed to form an association under the law.

The Delhi HC’s order left the police feeling apprehensive that the probe would be biased against them, protesting cops said. They said pressure was being mounted against the police by the lawyers and the courts.

The police personnel and their family members, who assembled in large numbers outside the Police Headquarters on Tuesday morning, were galvanised by a video which showed another cop being attacked by a lawyer – this time at Saket court on Monday.

Policemen in Delhi are beaten up on roads but they stand ZERO chance of getting justice. In all such face offs ultimately the Police get punished but lawyers go scot free because they can hold judicial system to ransom.

So easy to punish cops. So difficult to enforce the law. pic.twitter.com/mQB3BRENGB

The cop, constable Karan Yadav, posted at Mehrauli police station, had gone to execute a court order when he was stopped by a group of lawyers. One of them could be seen hitting him twice on the neck with his elbow and slapping him twice.

Wary that such attacks could take place elsewhere if the lumpen elements among the lawyers would keeping taking the law into their own hands in this manner, the protesting police personnel demanded immediate action against the erring lawyers.