As the Two Pillars of the Police State Clash, Faultlines Begin to Emerge

Lawyers and police, in their own separate ways, have helped India degenerate into a banana republic. 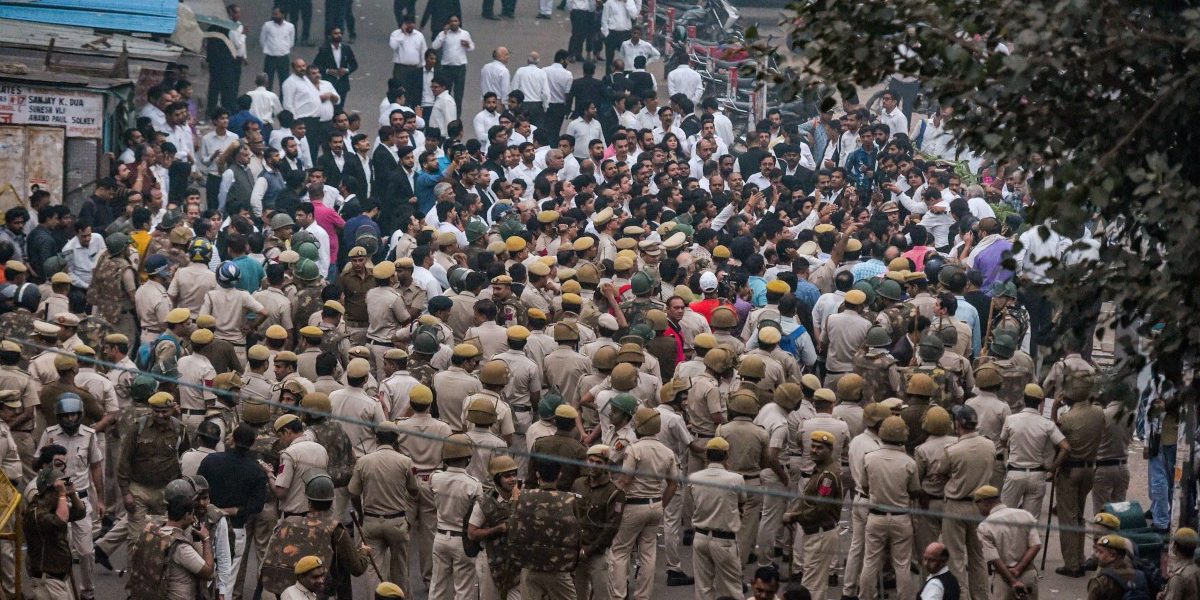 The centrality of policemen in our incipient police state has been a work in progress for quite a long time. It began to acquire a definite shape, rather insistently, from the time of the real ‘encounter’ at Batla House in 2008. By the time John Abraham was cast in the lead role in the 2019 celluloid presentation, Batla House, it was firmly grafted, almost unknowingly, onto our national imagination.

In this emerging police state, the claims and demands of the police force get prioritised over those of the citizens and civil society. Even constitutional guarantees and rights are cast aside in the name of a never-ending battle against ‘terrorism’.

By now, the protocols and priesthoods of our police state stand consecrated. We have worked ourselves up into a practised frenzy against the “terrorist”, “terror groups” and the “terror state”; we demand unquestioning support and endorsement for policies and practices devised by these priests. Any and all instances of police excesses and high-handedness are to be explained away as an exercise of lawful authority in the all-important fight against ‘terror.’ And, the judiciary can always be relied upon to grant its benediction to the deeds and deprivations, inflicted by the police state, on the supporters and sympathisers of the so-called ‘terror groups’.

Suddenly, those eleven hours outside the Delhi Police headquarters brought us face to face with the calculus of lawful lawlessness that undergirds the police state. What a delicious irony. The police officers took recourse to those very tactics that they so roughly deny to civil society activists and political protestors – an unauthorised assembly in large numbers, blocking traffic in the heart of the capital, using social media appurtenances to summon the faithful, unflattering placards, raising provocative slogans and shouting down senior officers. 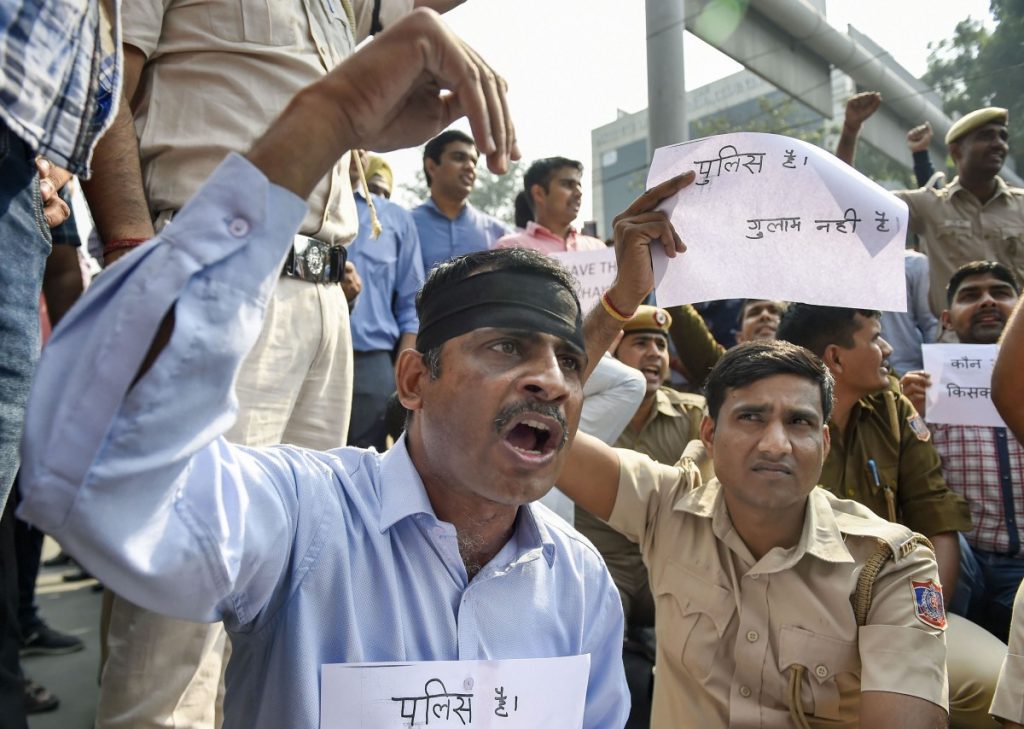 Delhi police protest after a clash with lawyers. Photo: PTI

While the police state was being desecrated, its high priests and presiding deities were conspicuously absent. All their bluster, bullying and scowling is reserved, it would seem, for democratic opposition. For once, the great manipulators appear to have misplaced their bragging marbles.

For eleven hours, the police state’s capital was left to its fate, un-policed and unprotected. Words like “mutiny” and “revolt” were bandied about. It was an unnerving afternoon. A frightening nightmare, considering that we are so very fortunate to be blessed with the presence of the strongest, the most powerful political leadership of all time. Yet, organised anarchy was just a misstep away. And, in this case certainly, all is not well that just manages to end well. In fact, we do not know if it has ended at all.

All this flirtation with defiance because the policemen had a reason – and, a damn good one – to feel aggrieved and angry at the other pillar of the very police state: the district-level legal fraternity of judges and lawyers.

It is this slice of the legal fraternity that has worked zealously to garner judicial respectability for the excesses of the police state. We have been witness to the unseemly spectacle of lawyers in district courts ganging up to deny legal defence to those identified by the security forces as involved in ‘terror’ cases. These hooligans [in the Bar Council of India’s language] in black coats in district courts across the country have become, over the years, the police state’s stormtroopers. They have besmirched India’s fair name as a republic of laws, with an independent judiciary. And, it is this very Delhi Police that looks the other way whenever some lawyers rough up a Kanhiya Kumar in a so-called ‘sedition’ case.

Rough elements in both the Delhi Police and the district lawyers have come to claim for themselves some kind of immunity as footsoldiers of the police state. Both these fraternities, in their own separate ways, have helped India degenerate into a banana republic. Indeed, both lower level policemen and junior lawyers and judges are everyday participants in the suborning of law and the violation of the Constitution by their own seniors, all in the service of scheming politicians. Which Delhi Police constable will have respect for his seniors when not long ago he had witnessed the midnight raid by one section of the police on the then-CBI chief’s office. The constables, sub-inspectors and inspectors have little reason to respect their seniors.

It was deeply disappointing – though not surprising – that on Tuesday evening, the Delhi police commissioner told reporters that his organisation is “a disciplined force and will stand up to the expectations of the government and the public.” Notice that the government takes priority over the public! After all, it is the “government” that decides senior officers’ postings, promotions and post-retirement placements. The discipline and dedication of the police inspector is rarely matched by that of the inspector-general in a police state.

Meanwhile, a Delhi high court bench chose to order the suspension and transfer of the police personnel, while directing that the FIRs filed against the offending lawyers would not be executed. A strange and bizarre experiment in rule of law.

That these two communities were willing to take to the streets and resort to violence reflects a much wider crisis: the police state has no moral authority and sustains itself entirely on the ability to make maximum use of coercive instruments to tame citizens into submission. And, nobody should know better than the police and the lawyers, two communities which help the police state maintain its overlordship. It was this bottom line that was underscored on Tuesday. A dangerous fault-line has emerged in our polity.