At the first press conference called since the January 5 attack, the DCP Crime, Delhi, did not mention the masked people seen in the widely circulated videos. 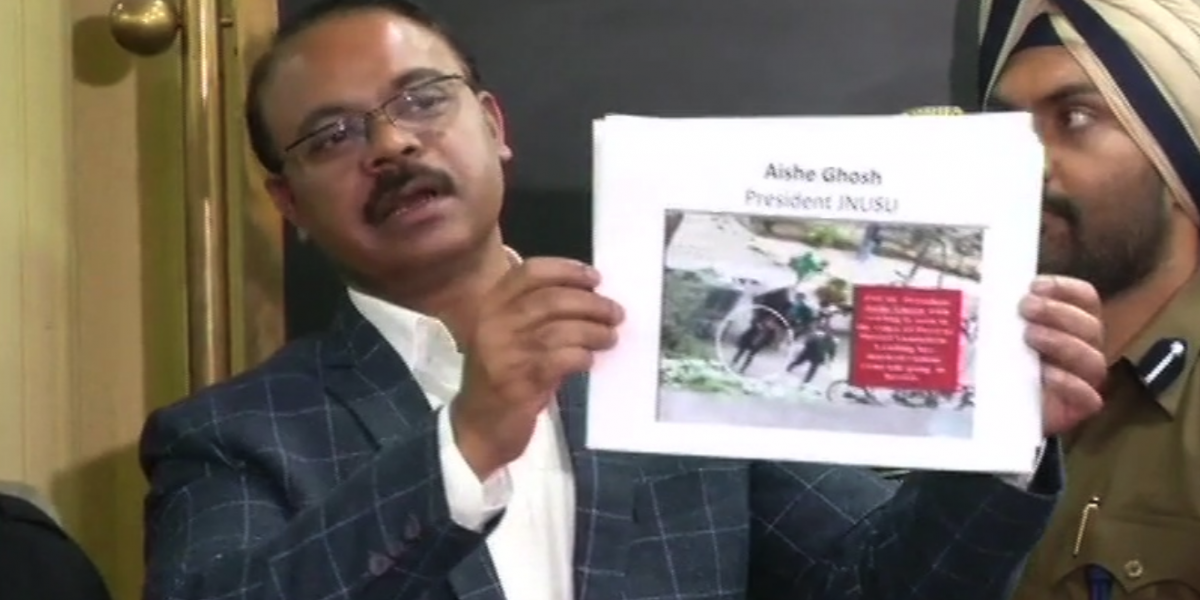 New Delhi: Chiefly zeroing in on a video being circulated on social media that was shot before Sunday evening’s brutal attack by a masked mob inside the Jawaharlal Nehru Univesirty campus, the Delhi Police on Friday named nine persons, including the JNU Students Union (JNUSU) president Aishe Ghosh, as suspects.

Ironically, Ghosh had sustained head injuries from the attack by masked persons and had to be rushed to the All India Institute of Medical Sciences (AIIMS) along with several other students and some university teachers.

Media reports said at least 35 persons were injured on Sunday’s attack carried out by masked people, holding sticks and spreading terror on campus. Ghosh and JNUSU office bearers, and also students not associated with it, had blamed the Akhil Bharatiya Vidyarthi Parishad (ABVP) – the youth wing associated with the Bharatiya Janata Party – for unleashing the violence at the campus. Screenshots of WhatsApp groups named ‘Unity Against Left’ and ‘Friends of RSS’ where members were planning the attack were also circulated on social media.

However, on January 10, flashing photographs taken from the video, which incidentally had also been shared by rightwing Twitter handles and the official handle of the ABVP, DCP (Crime) Joy Tirkey told journalists that Ghosh, “led the mob that attacked the Periyar hostel on the evening of January 5”.

He said, “Three cases have been registered till now and they are being investigated by us.”

The other names given out at the press meet by Tirkey, who is leading the investigation, were Shiv Pujan Mandal, Pankaj Mishra, Chunchun Kumar (former JNUSU president), Yogendra Bharadwaj, Dolan Samantha, Sucheta Talukdar, Priya Ranjan and Bhaskar Vijay. There are some former students too.

While seven of them belong to Left backed groups, two are associated with ABVP.

Tirkey said while a large number of students wanted to follow the university administration’s registration process, which has been boycotted by JNUSU for over two months demanding that the university roll back the fee hike, Left-backed groups and their supporters didn’t allow the students to do so. “The JNU administration decided to go for online registration of students from January 1-5. JNU Students’ Union including Students Front of India, All India Students Federation, All India Students Association and Democratic Students Federation were against it,” he said.

The officer said, “No suspect has been detained till now, but we will begin to interrogate the suspects soon.”

This was Delhi Police’s first press conference after it began its investigations into the incident. Tirkey said, “This is the first information of our investigation that we are sharing with you. We will come back again.”

Sunday’s incident had also put a question mark on the Delhi Police’s wait till 7.45 pm to enter the campus even though by then at least 23 distress calls were received by its PCR unit and the university administration, informing it about violence at around 3 pm.

The police have also received flak for registering an FIR against an injured Ghosh on January 7 while not being able to arrest anyone for the January 5 violence. Videos of attackers with sticks leaving the university in a line while the Delhi Police personnel waited and watched have been doing the rounds on social media.

Tirkey didn’t mention anything about the masked men. All the photos showed at the press meet were of students whose faces had no cover, but were blurred beyond recognition.

Meanwhile, reacting to the Delhi Police naming her and fellow students, Ghosh denied any involvement in the attack and told reporters that the Delhi Police had acted with bias. “I had gone to the scene to stop the violence. I was not wearing any mask, I have done no wrong…I still have my blood soaked clothes,” she said.

JNUSU president Aishe Ghosh, after meeting MHRD secretary Amit Khare today: We demanded that JNU VC should be removed from his post immediately as he is not able to run the university. We need a VC that can help in a fresh beginning and can help in bringing normalcy at the campus pic.twitter.com/vtKm31juYL

She added, “JNU representatives were forced to go to stop the violence because Cyclops (the private security group) failed to reach there in spite of several SOS calls made to its office.”

She said the police, instead of questioning Cyclops and the university administration for their inability to protect the students, is going after the students who tried to help out teachers and students being attacked by the masked mob.