The court has also appointed advocate Zoheb Hossain to meet people who have been unable to avail ration benefits due to Aadhaar being made mandatory. 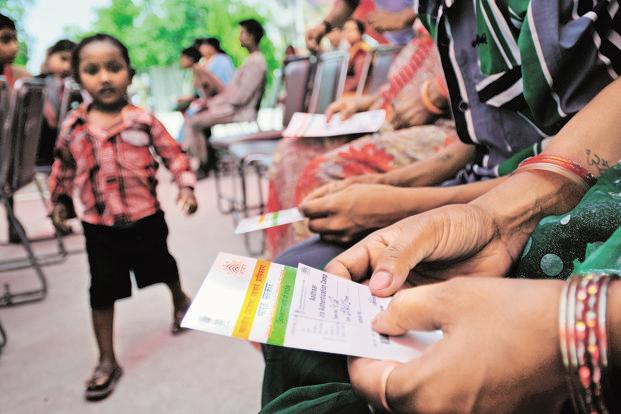 New Delhi: The Delhi high court on Thursday, May 25, declined the Centre’s request to dismiss a petition filed by the Delhi Rozi Roti Adhikar Abhiyan against Aadhaar being made mandatory to receive ration under the National Food Security Act (NFSA).

A bench comprising acting Chief Justice Geeta Mittal and Justice C. Hari Shankar appointed Zoheb Hossain, the counsel for Unique Identification Authority of India to act as a commissioner of the court. He would be required to visit the shops where the point of sale (PoS) devices were installed and meet ration card holders who have been excluded from food security due to Aadhaar before filing his report on the subject.

While the Centre wanted the petition dismissed on the grounds that similar petitions were pending before the Supreme Court, the bench turned down the request saying the powers under Article 226, which deals with powers of the high courts, were broader.

The group had contended in its plea that Aadhaar was leading to exclusion of ration card beneficiaries.

Under the NFSA, all those listed on the ration card are entitled to five kilograms of food grains per person. Thus, many families have been unable to access their full entitlements due to the discrepancies which have cropped in.

The activists also stated that in 2015, the Delhi government had initiated a pilot project in which 42 ration shops were provided with Aadhaar-enabled PoS devices. Due to this too, it said, people were suffering – many of these devices have not been functioning because of recurring problems of network coverage, biometric failures and rejection of even genuine beneficiaries.

Despite the pain caused by the exercise, the group said the government is still insisting on making biometric authentication mandatory for all shops, causing exclusion of and hardship to genuine card holders in this system.

Incidentally, in March, the Delhi Rozi Roti Adhikar Abhiyan and Satark Nagrik Sangathan had released a report titled ‘Peoples’ Assessment of the Implementation of Transparency, Grievance Redress and Accountability Measures of the National Food Security Act in Delhi’ which had also flagged the issue.

The report had highlighted how while the pilot was initiated in 42 ration shops, by the time the survey was conducted only 22 shops were still part of the pilot. “Despite evidence of PoS device not functioning, problems of network coverage, problems with biometric failures, the government,” it had said, “is understood to be pushing a proposal to make PoS mandatory for all shops.”

Criticising the Delhi government for not making the report of the PoS pilot public, the survey had stated that while PoS devices were being touted as a solution for all the problems affecting the distribution of foodgrains under the public distribution system in Delhi, and as an anti-corruption measure, “the fact that these claims are far from the truth was borne out by an audit of some of the shops where the PoS was being piloted.”

Malpractices and violations continue despite Aadhaar

Siimilarly, giving the instance of another shop in Laxmi Bai Nagar, the report had stated that other than the name and number of the ration shop, no other information was on display at this shop, which too was Aadhaar enabled. “Therefore, the claims of the government that putting PoS machines in the ration shops will resolve issues of corruption and violation is clearly not true and is not borne out by evidence,” the report had insisted.

Affidavits on behalf of affected citizens

Meanwhile, in the issue before the high court, the group has also submitted affidavits of some affected citizens who have been denied rations due to the new Aadhaar norms.

One of these is of Anita Rai, a resident of Jagdamba Camp slum tenement in south Delhi who submitted that while her husband, who is a casual labourer, and she received rations in their name, the names of her two children were not listed in their card as at the time of applying for the ration card, they did not possess an Aadhaar number.

As such, the woman who works as a domestic help, submitted that while they were entitled to 20 kgs of ration for the four members, the family was having to make do with just 10 kgs, leading to an additional financial burden of Rs 400 since they had to procure the remaining ration from the open market. The petition is seeking relief for lakhs of such families who have been adversely impacted by the new Aadhaar norms.