A shortage was anticipated as 468 private liquor stores in Delhi were scheduled to shut shop from today after the expiry of their licences on July 31. 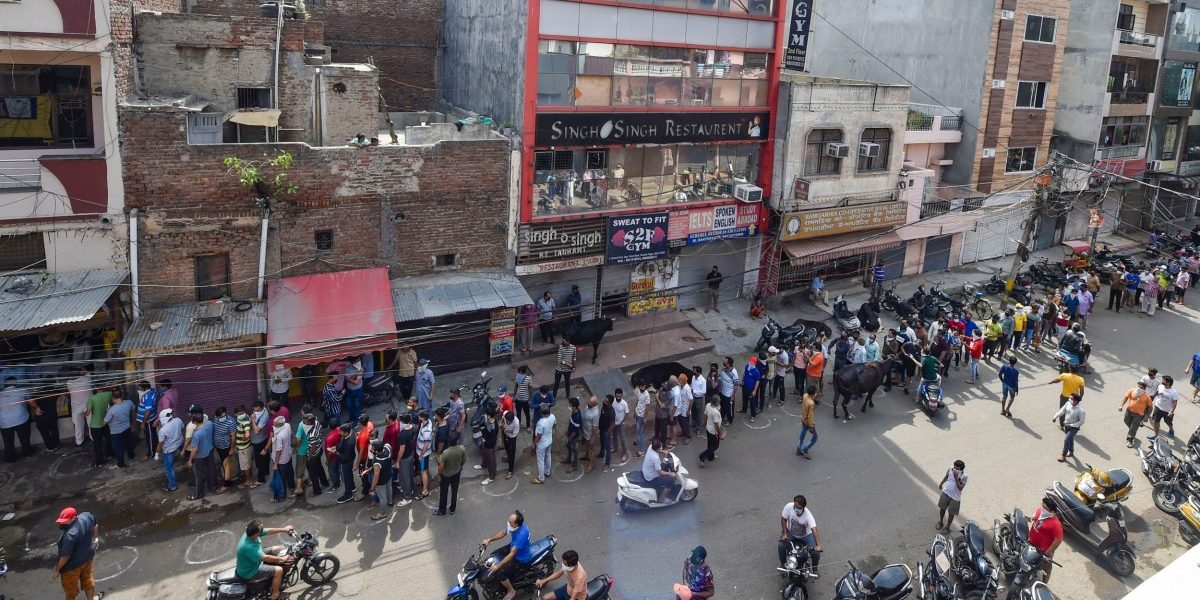 People queue outside a a liquor shop in Delhi on Monday. Photo: PTI/Manvender Vashist

New Delhi: Preempting chaos due to liquor shortage in the city, the Delhi government on Sunday decided to extend existing licences of liquor shops till August 31, officials said.

The private liquor stores numbering 468 in Delhi were scheduled to shut shop from Monday after expiry of their licences on July 31.

However, the liquor shops will open only after the excise department’s order following the Lieutenant Governor’s nod, they said.

“The government has sent decision of its Cabinet to extend existing liquor vend licences for one month, up to August 31, to the Lieutenant Governor. Orders allowing the liquor stores to remain open after July 31 will be issued after Lieutenant Governor’s approval,” officials said.

Delhi government has decided to revert back to old excise regime and run liquor stores through its agencies after realising that the Excise Policy 2021-22 was not able to achieve the desired objectives of fetching greater revenues and the fact that it’s implementation is under scanner for alleged violation of rules and procedural lapses, officials said.

The government stores of liquor will open for a period of six months from September 1 and till then the private vends will continue to operate, they said.

“This was needed as the government has already decided to revert to old excise policy regime and run stores through its agencies, a process that could create shortage and chaos as the new shops will take days to open,” said a government source.

The government on Saturday announced reverting back to old excise regime and run stores itself for six months. Under the Excise Policy 2021-22, 468 retail liquor stores were running in the city whose licences expired after July 31.

Many liquor vends in the city, however, were closed after selling out stocks through rebates and special schemes like buy one get two free.

“There is some more liquor and beer available and people are coming to get whatever they can. Those asking for specific brands have returned back empty handed also,” said a liquor store manager in Laxmi Nagar.

The rush was more on Saturday but with liquor stores running out of stock, customers have now started looking to neighbouring Noida, Ghaziabad, Gurgaon and Faridabad for their quota, said a customer Vivek outside a closed liquor vend in Delhi’s Shekh Sarai.

A banker from Mayur Vihar Extension said he used to get his favourite brands available locally but now the stocks were run out.

“The shops in the nearby mall have run out of stock and left with almost nothing. Now, I will ask friends in Noida, Gurgaon to keep me stocked up till shops here run normally again,” he said.

Meanwhile, the Delhi government Corporations that were earlier in retail business of liquor before new Excise Policy 2021-22 was implemented in November 2021, have started activating their system to open liquor stores.

The four corporations-DSIIDC, DTTDC, DCCWS and DSCSC- ran 475 liquor stores out of total 864 in Delhi under the old excise policy regime. The private stores licences held by individuals, numbered 389.

A DSIIDC official informed that around 90 shops of liquor were run by the Corporation on rent.

Several of those rented premises are still vacant where the liquor stores can be opened. But the whole process from getting requisite licences and placing order for stocks will take 4-5 days,” he said.

Another Corporation DTTDC has also contacted around 40 owners of private premises where it earlier operated liquor stores. Prior to new excise policy 2021, DTTDC ran 122 shops of liquor, officials said.

The Excise Policy 2021-22 extended by the government till July 31 was withdrawn in the backdrop of a CBI probe recommended by the Lt Governor into alleged violation of rules and procedural lapses in its implementation.

The policy was extended twice since April this year, as the government was still working on a revised excise policy for 2022-23 for which necessary approvals were yet to be taken.

Under the Excise Policy, government had issued retail licences for 849 vends across the city divided into 32 zones. Currently only 468 were running whose licences expired on July 31 as the policy has been withdrawn by the government.

There was no clarity over extension of other excise licences including those for hotels, clubs and restaurants serving liquor and wholesale liquor operations that too seized to exist after withdrawing of the Excuse Policy 2021-22.

Deputy Chief Minister Manish Sisodia who also holds Excise portfolio had said announcing withdrawal of Excise policy on Saturday that the Chief Secretary was directed to ensure that there was no “chaos” in the city during the transition period before opening of government liquor stores.

The Chief Secretary was also asked for keeping check on sale of illegal alcohol in the city in the meantime, Sisodia had said.