Hospitals have either stopped new COVID-19 admissions, or began taking consent forms from relatives that they would not be liable if the patient died due to shortage of oxygen. 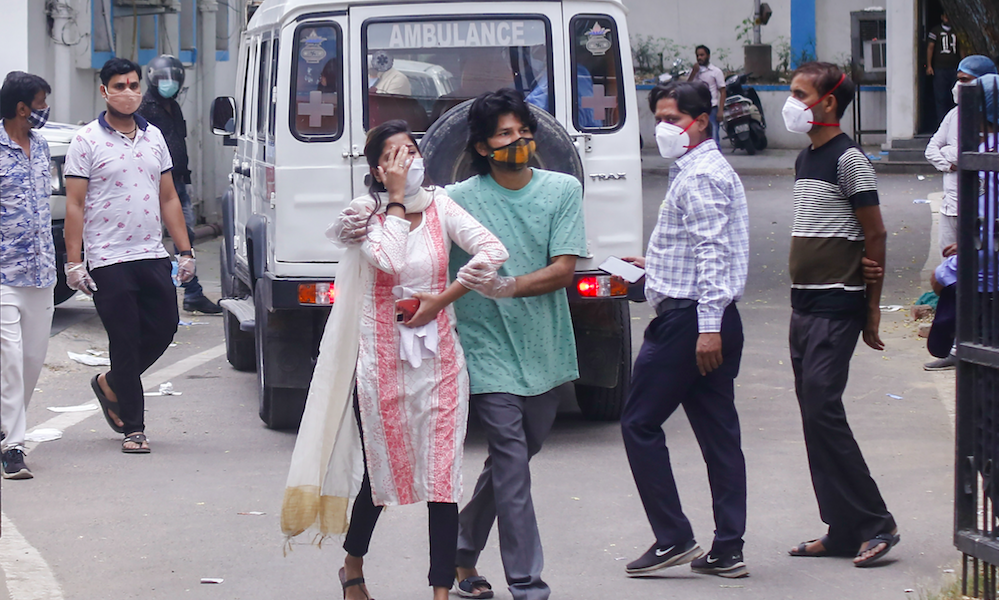 Relative react after the death of a family member due to COVID-19, as coronavirus cases surge in the national capital, at LNJP hospital in New Delhi, Tuesday, April 20, 2021. Photo: PTI

With the oxygen crisis continuing unabated and unable to cope with the dwindling reserves, the heads of several private hospitals in Delhi on Saturday either stopped new COVID-19 admissions, urged some of the patients to move out or began taking consent forms from relatives that they would not be liable if the patient died due to shortage of oxygen. The hospitals also suggested that the Centre and Delhi government intervene in the matter and appoint nodal officers to take stock of the oxygen levels real time and address the situation.

At least 20 COVID patients died late Friday at Jaipur Golden Hospital in North West Delhi as the hospital ran out of oxygen. This being the second such instance after 25 most sick patients died under similar circumstances in Sir Ganga Ram Hospital earlier this week – most hospitals sent out distress calls, urging immediate supply of oxygen saying their patients would die otherwise.

According to PTI, citing officials, Sir Ganga Ram Hospital received five metric tonnes of the life-saving gas in the early hours of Sunday.

“Oxygen supply to last only half an hour now, more than 200 lives are at stake. We lost 20 people due to an oxygen shortage last [Friday] night,” said a distressed D.K. Baluja of Jaipur Golden Hospital, indicating the dire situation his hospital remained in.

The Fortis Hospital in Shalimar Bagh also issued a statement saying it was “running out of oxygen”. The hospital cautioned that “patients’ lives are at risk. We are running on backup, waiting for supplies since morning. We are currently suspending admissions. Request immediate assistance.”

Meanwhile, several hospitals decided to ask some of their patients to leave in view of the crisis. At Saroj Hospital in Rohini, the authorities said they will have to “discharge all COVID patients due to oxygen crisis”. Stating that families of patients have been given three hour’s notice to find beds, the hospital director said the company providing oxygen to them was not responding. “Situation is very critical.”

Similarly, managing director of Batra Hospital in South Delhi, Dr S.C.L. Gupta, also stated that in the absence of adequate and timely oxygen supply the hospital has been left with no option but to ask the patients to leave. “We are requesting people to take their patients wherever O2 is available. We understand patient is someone’s mother, father.. if I lose someone close, I’d naturally feel bad,” he said.

Smaller hospitals found themselves at an even more disadvantaged position as no one appeared to be listening to them. The director of Neo Sehgal Hospital, Dr. Narin, also sent out a distress message saying, “I have 150 patients. Just two hours of oxygen left. I’ve tried all possible options. I’m helpless. Please help me.”

The hospitals have also pointed out that due to the continuous pressure on them to keep calling for oxygen, as inventory dips to critical levels, their staff was also getting exhausted.

D.S. Rana, the chairman of Sir Ganga Ram Hospital, where 516 COVID patients are admitted, said the government should “reduce the patient intake” if they are feeling hapless about dealing with the situation. “On one side they have increased COVID beds and on the other side they can’t supply oxygen in sufficient quantity. How are we supposed to work? If this is COVID tsunami and the government has invoked Disaster Act then they should work according to the Act. We need immediate intervention.”

He also suggested that since “the whole administration is only busy in making frantic calls”, the government should have a “nodal officer sit in hospital to take stock”.

At India’s premier government medical institute, the All India Institute of Medical Sciences (AIIMS), too, the oxygen supply issue impacted the admissions for a short while on Saturday. The Institute issued a statement saying, “admissions in the Emergency were restricted for an hour as the oxygen pipelines were being reorganised due to increased requirement of oxygen for COVID-19  patients.”

The medical institute said “currently around 100 coronavirus infected patients are already receiving treatment at the Emergency. This is in addition to more than 800 patients who are already admitted at various centres of AIIMS.” It added that “admissions are open and emergency department is functional”.

Delhi is expected to add around 500 more COVID beds soon with the re-opening of the Sardar Patel COVID Care Centre at Radha Saomi Beas Satsang Complex in Chhatarpur. Union health minister Harshvardhan on Saturday inspected the facility, which was started by Indo Tibetan Border Police in July last year but was closed down in February this year, after the number of COVID patients admitted there dipped. It had treated 11,657 patients during the period.

The Centre, which had a capacity of 10,200 patients last year, would resume operations with around 500 beds. The Ministry of Home Affairs has stated that it would provide “an adequate number of medical officers and para-medical staff to man 500 oxygenated beds” at the Centre.