The Delhi Disaster Management Authority ordered that there will be no public celebrations in the national capital for upcoming festivals such as Holi, Navaratri and Shab-e-Barat. 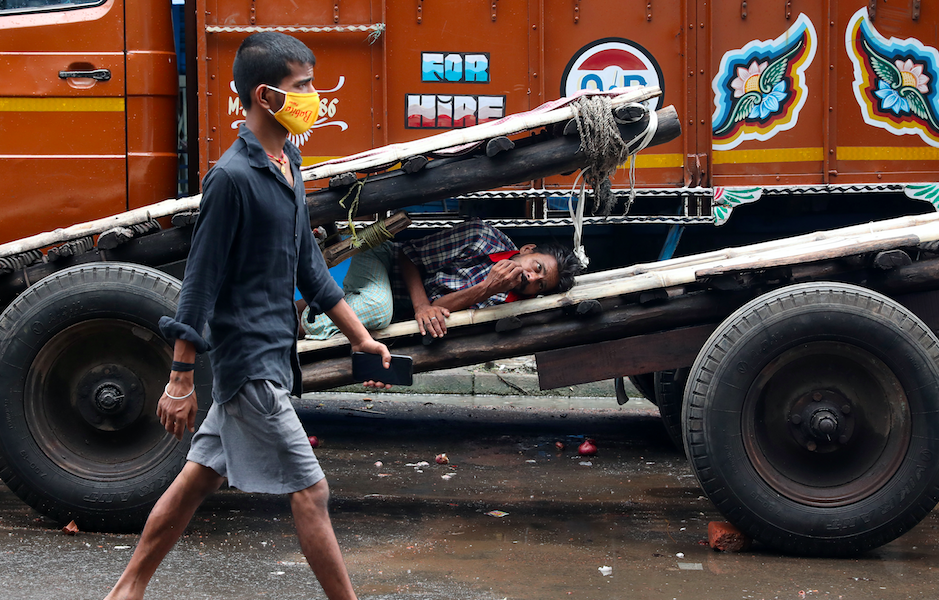 A man walks past another during the lockdown in India. Photo: Reuters

New Delhi: In view of a persistent rise in COVID-19 cases, the Delhi Disaster Management Authority (DDMA) on Tuesday ordered that there will be no public celebrations in the national capital for upcoming festivals such as Holi and Navaratri.

Delhi chief secretary Vijay Dev directed authorities to ensure strict compliance of the order. “All authorities concerned will ensure that public celebrations and gatherings, congregations during upcoming festivals like Holi, Shab-e-Barat, Navaratri etc shall not be allowed in public places/public grounds/public parks/markets/religious places etc in NCT [National Capital Territory] of Delhi,” Dev said in his order.

Delhi reported 1,101 COVID-19 cases on Tuesday, the highest in over three months, while four people succumbed to the disease during the same period, the health department said. It was the first time since December 24, 2020 that the city recorded more than 1,000 COVID-19 cases.

The DDMA in its meeting on Monday, attended by the lieutenant governor and chief minister Arvind Kejriwal, had discussed the emerging COVID-19 situation in the city.

“DDMA is satisfied that the NCT of Delhi is again under threat of the spread of COVID-19 epidemic… And whereas, the situation of COVID-19 in Delhi has been reviewed and it has been observed that there has been a persistent rise in COVID-19 cases in NCT of Delhi during the last fortnight,” the order stated.

It is anticipated that gatherings, congregations and public celebrations during the upcoming festivals like Holi, Shab-e-Barat, Navaratri may pose a considerable threat of the spread of the virus, it stated. “Considering this, it has been decided that public celebrations and all gatherings, congregations during upcoming festivals should not be allowed in public places,” stated the DDMA order.

The chief secretary has directed all district magistrates, their counterpart district deputy commissioners of police and other authorities to ensure that gatherings are not allowed during the upcoming festivals. District magistrates should take appropriate action according to health protocol in NCT of Delhi with regard to screening, testing, isolation, surveillance, added the order.

Also read: COVID-19 Vaccine Available for Everyone Above 45 From April 1: Health Ministry

In another order, the DDMA has called for additional precautionary measures to prevent and control the rapid increase of cases in Delhi regarding people coming to the city from other states where COVID-19 cases have recently been rising “significantly”. “All DDMA authorities will conduct random testing (RAT/RT-PCR) of passengers coming from the states where COVID-19 cases are surging, at all airports, railway stations, Inter-State Bus Terminals (ISBT) and other alighting points,” said the second DDMA order.

After the collection of samples, the travellers would be allowed to exit. “However, those passengers who are found positive shall be mandatorily quarantined/isolated at their place of stay or government facilities like covidcare centres and hospitals for 10 days as per the prescribed protocol of the Ministry of Health and Family Welfare,” the order said.

The authorities will ensure that maintaining record and surveillance tracking, tracing, of such passengers is done according to the protocol prescribed by the State Integrated Disease Surveillance Programme.