The government should recognise that a heritage site does not exist in isolation; it is a part of a larger region-specific cultural ecosystem. 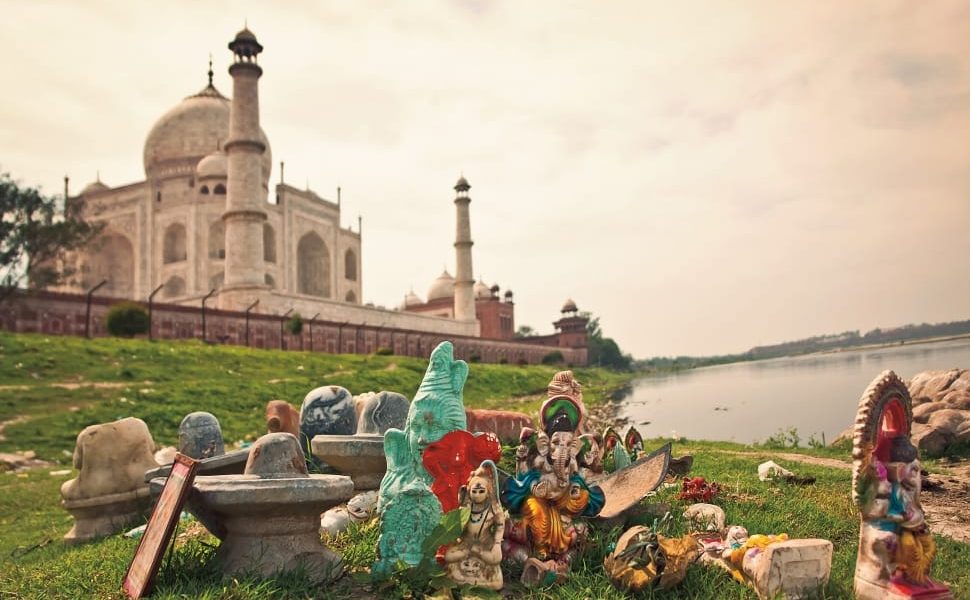 The Yamuna river flowing by the Taj Mahal. Photo: Peakpx

This should not be altogether surprising. Multiple misconceptions surround the idea of ‘culture’. Often dismissed and limited to dance, music, crafts, festivals and visual and literary arts, it is even separated from one of its inherent elements – heritage. The latter is restricted to monuments and historical sites.

A heritage site does not exist in isolation; it is a part of a larger region-specific cultural ecosystem. However, a poor understanding of cultural heritage has led to heritage sites being disconnected from their surroundings, which in turn has resulted in imbalanced development.

The Taj Mahal, for example, has been cut off from the specificities of Agra city and the Yamuna river that flows near it. Contrast this with the Agha Khan Trust’s initiative to conserve Humayun’s Tomb in New Delhi, and its holistic approach that includes the Nizamuddin Basti.

The government’s efforts at cultural conservation need a more definitive strategy. The programme should address the water crisis, creates jobs and be in line with sustainable development goals. One way to do this would be to begin by tabulating a geographical region-wise grid of the 123 heritage escapes, coordinated with local traditional water-wisdom and other scientific heritage knowledge.

Also read: In Bengaluru, 121 Species of Trees Thrive In Sacred Sites, Stand Against March of Urbanisation

Then, this tabulated information should be translated into action by evolving a plan for systematic community engagement with the heritage sites. The sites can be the focal point to form ‘paramapara panchayats’. The plan must work to bring in groups like the anagnwadis, resident welfare associations and other civil society bodies to actively claim community ownership of water security and practical science for everyday life.

Third, information on the multilayered heritage site programme should be communicated to the larger community, so they can be involved. For this, using regional and language-specific folk performing arts can be effective, and also provide jobs for marginalised skilled performer communities and help conserve intangible heritage.

This combined heritage programme in the 123 heritage sites can link water issues and job creation in each heritage landscape. The site programme will serve to connect local natural heritage with traditional science and skill heritage. It will empower communities at the grassroots level and ensure sustainability.

The action plan also talks about taking scientific knowledge to rural children by investing in mobile van science museums. Viewing the present national crises, the culture of science needs to be a part of everyday life. As mentioned above, that can happen through the suggested heritage site programme.

The site programme can incorporate, for instance, besides traditional water-wisdom, scientific heritage on categorising plants by indigenous communities or sustainable practices concerning seeds and irrigation. The mobile van ‘museums’ are a non-productive and misdirected utilisation of public money, and ignore larger and more urgent issues.

Additionally, the action plan will develop places for aarti along sacred rivers for daily pilgrims by installing large LED screens and audio systems. This spectacle is again ignoring the urgent issues of community ownership, maintenance and recharging of the ‘sacred’ water bodies. The rivers, lakes, ponds and step-wells need to be de-silted and cleaned.

The contrast can be best gauged by referring to contrasting community expressions. Water expert Farhad Contractor says, “The urban city of Udaipur illustrates existent living water wisdom and community practices. For instance, during the celebration of the festival of Ganghaur, women gather around lakes. They engage in cleaning the lakes so that they can continue to be used by the people and provide clean recreational and worship spaces.”

In contrast, the present Uttar Pradesh government in the Badaun district organised daily aartis during the Kanwariya Yatra. Reports say that the district collector routinely attended the aartis, rather than motivating the public to take ownership and participate in cleaning the Ganga. This is similar to the recently completed spectacle of the Ardh Kumbh that was converted to a Maha Kumbh Mela celebration by the Uttar Pradesh government. At the end of the festival, it was evident that there was no plan to deal with the garbage created, leaving the river and the city dirtier than before.

The Union Ministry of Culture’s misplaced action plan ignores the potentiality of culture to contribute to development. In the directionless plan, the emphasis is on using culture to create spectacles. The lack of engagement with experts as consultants is evident.

With the economy nose-diving, and important issues like joblessness and water scarcity plaguing society, the 100-day action plan is flimsy. There is the need to bring in cultural heritage professionals, and for responsible investment to address larger issues rather than focus only on spiritual spectacles.

Navina Jafa is vice-president of Centre for New Perspectives, a think tank that works on intangible heritage, traditional knowledge through research and pilot programmes for sustainable development.