Vallabhbhai Kathiria claimed that the chips were not government certified but tested. 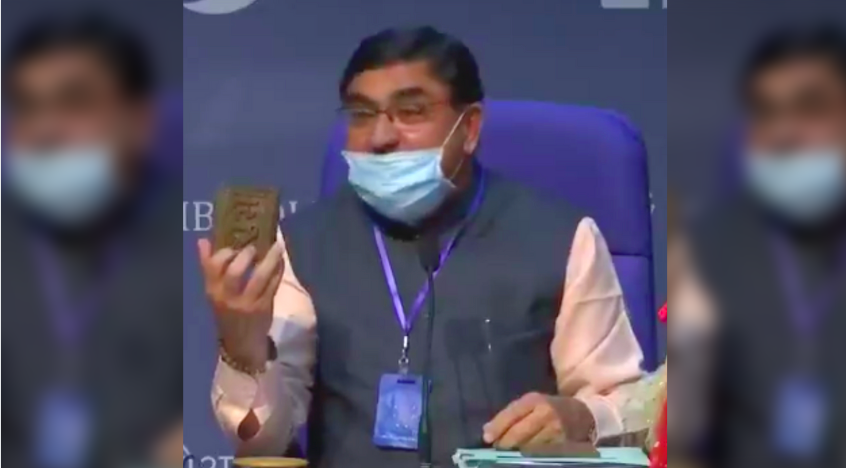 New Delhi: The head of the Rashtriya Kamdhenu Aayog (RKA) on Monday released a physical chip made apparently of cow dung and which he claimed could reduce “radiation from cellphones”.

Several news outlets have carried reports of Vallabhbhai Kathiria unveiling the chips at a ‘Kamdhenu Deepawali Abhiyan’ event, aimed at promoting products made of cow dung.

Photographs shared on social media show Kathiria holding up this ‘chip’ – a solid square – which RKA calls ‘Gausatva Kavach’. Indian Express has reported that it is manufactured by the Shrijee Gaushala at Gujarat’s Rajkot, a city Kathiria himself is from.

The chips are priced between Rs 50 and Rs 100 each, according to the Express report.

“This is a radiation chip. You can keep it in your mobile. We have seen that if you keep this chip in your mobile, it reduces radiation significantly. If you want to avoid disease, then this is to be used,” Express quotes him as having said.

News agency ANI has released a video showing Kathiria at the same event as well.

#WATCH: Cow dung will protect everyone, it is anti-radiation… It’s scientifically proven…This is a radiation chip that can be used in mobile phones to reduce radiation. It’ll be safeguard against diseases: Rashtriya Kamdhenu Aayog Chairman Vallabhbhai Kathiria (12.10.2020) pic.twitter.com/bgr9WZPUxK

Kathiria is a former Union health minister. His website says that he is “a renowned cancer surgeon.” However, although ANI quotes him as having said that the benefit of combatting radiation with cow dung has been “scientifically proven,” no such proof exists – nor is it true that cellphones emit any dangerous radiation.

“Now we have started a research project. We want to have research on these subjects which we consider a myth,” Kathiria reportedly said, citing the example of Bollywood actor Akshay Kumar, who had earlier said he drinks cow urine.

Asked by Express as to whether these chips, ostensibly funded by taxpayers’ money, were tested in a government laboratory for their claimed anti-radiation properties, Kathiria said, “These are not certified but tested. It can be tested in any laboratory, even in a college.”

The RKA has been a part of the Ministry of Fisheries, Animal Husbandry and Dairying, since 2019.

The Bharatiya Janata Party-led Centre has been keen to focus on the benefits of cow dung and cow urine, often with claims that remain unsubstantiated by science. The Wire has noted earlier how in the time of the current health crisis, statements by government position holders exalting healing properties of cow byproducts have sought to mislead instead of inform people.