After 'Record' High on Monday, Vaccine Numbers Drastically Drop in Some BJP-Ruled States

Madhya Pradesh was able to deliver less than 5,000 doses on Tuesday, compared to more than 17 lakh on Monday, giving credibility to claims that Monday's record was artificially manufactured. 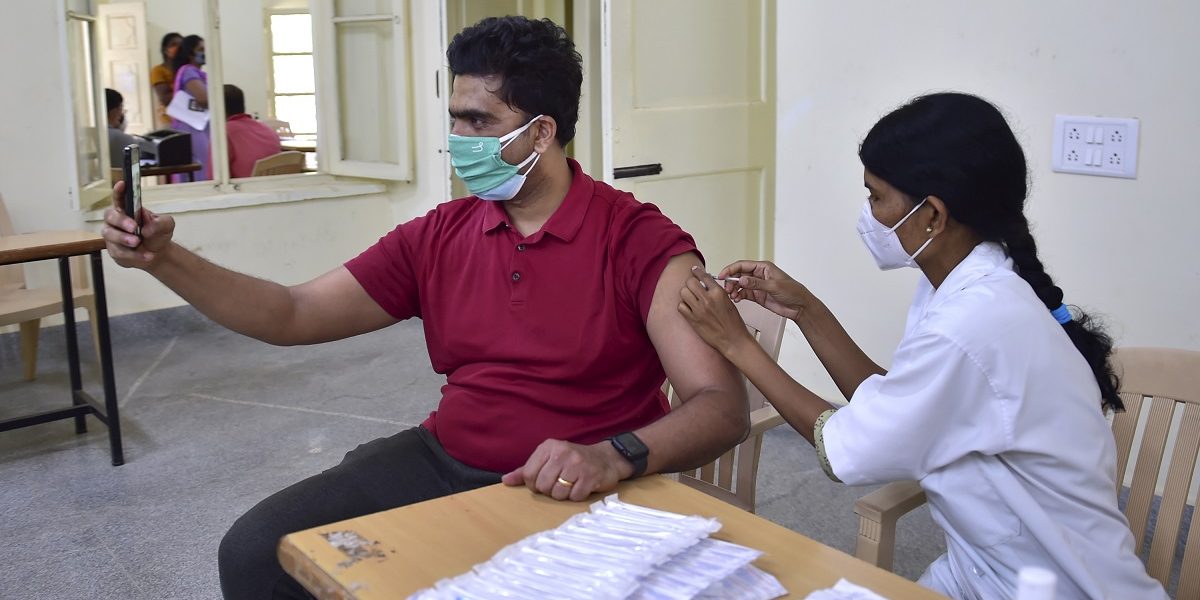 A health worker administers a dose of COVID-19 vaccine to a beneficiary. Photo: PTI/Shailendra Bhojak

New Delhi: The number of COVID-19 vaccines administered in many BJP-ruled states dropped dramatically on Tuesday, adding weight to concerns that the ‘record’ high of vaccinations on Monday was artificially manufactured.

As a Scroll.in report had pointed out on Tuesday, many BJP states had given out below average number of doses in the days before Monday. This allowed them to administer an unusually high number of vaccines on Monday, creating the ‘record’.

On June 21, the Centre took back control of purchasing the majority of vaccines and distributing them freely to states. The report suggested that the record was manufactured to boost the Centre’s image, which has taken a beating over shortage in supply of vaccines over the past two months.

On Monday, over 88 lakh vaccine doses were administered across the country. On Tuesday, this number was 54 lakh, according to the Union health ministry. If the nationwide number hovers around this number for the next few days, it is likely to provide even more evidence that Monday’s number was an unrealistic everyday target.

On Tuesday, data from the Co-WIN portal showed that in many large BJP-ruled states, the vaccines administered on Tuesday were significantly lower than the numbers reported on Monday. Once again, this was starkly evident in Madhya Pradesh. On Monday, the state administered 17.44 lakh doses, which fell to below 5,000 on Tuesday. This was just 0.3% of Monday’s total.

On Monday, Madhya Pradesh administered over 17 lakh vaccines. This was preceded by just 692 vaccines on Sunday and followed by just 4,842 doses on Tuesday.

There was also a dramatic drop in Haryana and Karnataka. While the former administered 5.45 lakh doses on Monday, it was able to give out only 76,000 on Tuesday, a drop of 85%. In Karnataka, the figure dropped from 11.59 lakh on Monday to 3.95 lakh on Tuesday.

While there was a small drop in Gujarat – from 5.2 lakh on Monday to 4.27 lakh on Tuesday – such fluctuations have been observed in the past also, due to various factors. The same could be said of Assam, which handed out 2.74 lakh doses on Monday and 2.49 lakh doses on Tuesday.

Uttar Pradesh performed better on Tuesday, administering 8.21 lakh doses. On Monday, it had given out 7.68 lakh doses.

Among large non-BJP ruled states, this trend could not be observed. Kerala handed out 2.63 lakh doses on Monday and 2.30 lakh doses on Tuesday. West Bengal’s number for the two days were 3.34 lakh and 3.01 lakh. Telangana administered around 1.5 lakh doses on both days.

There was, however a significant drop in Tamil Nadu, which administered 4.44 lakh doses on Monday, which halved to 2.23 lakh on Tuesday.

Andhra Pradesh too strived to create a ‘record’ on Sunday, handing out 13.74 lakh doses on that day. Data from the Co-WIN portal shows that the state may have stockpiled vaccines to generate this number. The ‘record’ day was preceded by five days during which the highest number of doses administered was 81,695 (on June 15). On Monday and Tuesday, its numbers dropped drastically once again, giving out just around 40,000 doses.

Andhra Pradesh’s ‘record’ vaccinations on Sunday was preceded and followed by a drastic fall in vaccinations. Photo: Co-WIN Dashboard

The data suggests that the Centre retaking control may have helped two Congress-ruled states. In Chhattisgarh and Punjab, there was a significant spike in vaccinations on Monday and Tuesday. The former was able to administer around 1 lakh doses on both days, even though in the past 30 days it never gave out more than 10,000 doses.

Punjab administered more than 1 lakh doses on these two days. In the eight days before that, its highest single-day tally was 34,143.

In the third Congress-ruled state, Rajasthan, there was no significant change in trends. It handed out 4.73 lakh doses on Monday, which fell to 3.8 lakh on Tuesday, which is similar to the doses administered on Sunday.

As The Wire‘s Ajoy Ashirwad Mahaprashasta has written, the BJP’s effort to manufacture a ‘record’ number of doses seems to be part of its efforts to turn the vaccination drive into a political campaign – with an emphasis on Uttar Pradesh and seven other states where assembly elections are due next year.

On Monday, BJP national president J.P. Nadda visited the vaccination centre at the Ram Manohar Lohia Hospital, where he castigated the opposition for its alleged role in creating vaccine hesitancy and praising Prime Minister Narendra Modi. To quote from Mahaprashasta’s analysis:

“More than anything else, Nadda’s visit to RMLH appears to be the beginning of BJP’s well-coordinated publicity blitzkrieg around India’s vaccination drive in the months to come.

“Ever since the pandemic hit India last year, the BJP-led Union government’s focus has constantly been on better communication to negate criticisms of its handling of the crisis, but the latest public relations exercise is a step-up from its previous ‘positivity’ campaigns.”